‘We will fight back harder’: Hontiveros warns fake news peddlers 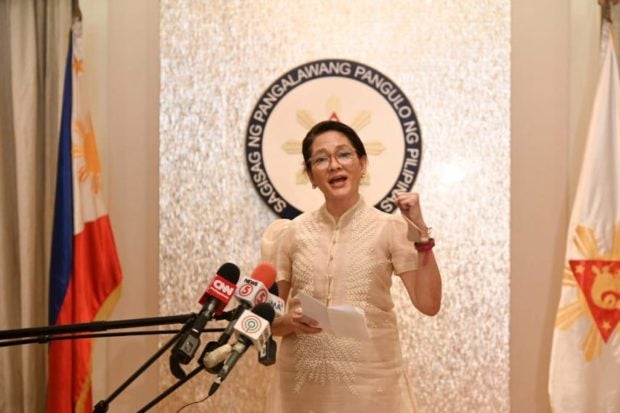 While Hontiveros remains a staunch advocate of protecting the public’s constitutional freedoms and most basic human rights, she said bearing false information will not be tolerated.

“I remain a staunch advocate in protecting our constitutional freedoms and our most basic human rights: freedom of expression, freedom of assembly, freedom of the press. All these are fully guaranteed,” Hontiveros, who was re-elected to the Senate, said after taking her oath of office.

“But we will not tolerate people who bear false information. We will fight back harder, against rumors, lies, propaganda, and fake news,” she added, as she sent a “stern warning” to the “dubious characters” in the “fake news universe.”

“This is a stern warning to all the dubious characters in the fake news universe. This time, we will not let your reckless disregard for truth slander our democracy, our country ever again,” she stressed.

As part of the Senate, Hontiveros has also pledged to support and empower the Filipino people as she prepares to submit a number of her bills for consideration in the 19th Congress.

Among the bills to be refiled is the Universal Social Pension for senior citizens, the magna carta for workers, and a bill for the maternity benefits of female workers.

“We will help spur economic growth and restore healthcare services disrupted by the pandemic. As promised, we will facilitate and increase the budgets for agencies integral to our recovery initiatives. Tuloy pa rin ang ating adbokasiya para sa Health Buhay at Hanapbuhay,” she said.

(We will help spur economic growth and restore healthcare services disrupted by the pandemic. As promised, we will facilitate and increase the budgets for agencies integral to our recovery initiatives. Our advocacy for Healthy Buhay at Hanapbuhay will continue.)

The senator also called for an increased budget for the agriculture sector.

(Together with our stakeholders, we will fight for the increased budget for agriculture. My office is also ready to participate in the discussions concerning the food crisis.)

Hontiveros, citing the Department of Agriculture, warned that the country faces an expected shortage of corn, feeds, fish, and pork this year.

With the incoming new administration, Hontiveros also urged her fellow newly elected officials to be united in ensuring the welfare of the Filipino people.

“We have always been a nation choosing to hope: for a fresh start, for better outcomes, for progress. But we have no time to lose. Every effort counts. Every day is a chance for me, and for us in government, to do justice to every Filipino,” Hontiveros ended. — Iliana Padigos, trainee

Read Next
Japan swelters as heatwave prompts power crunch warning
EDITORS' PICK
What to watch out for when selecting a video surveillance solution
Heads may roll at BOC, says Palace if sugar smugglers are allowed to use recycled import permits
vivo brings to the Philippines a powerful smartphone with a slimmer body, the vivo Y02s for only PHP 6,499
DOH reports increase in daily COVID-19 deaths, mostly unvaxxed
Palace: Biggest supermarkets in PH commit to sell sugar at P70 per kilo
House energy committee chair Arroyo bats for cheap electricity
MOST READ
Alyssa Valdez to miss Creamline’s AVC Cup campaign
DOJ indicts bank officer in $2.1 billion Wirecard fiasco
Peso loses ground vs US dollar
DepEd to give teachers P5K cash allowance within first week of classes
Don't miss out on the latest news and information.