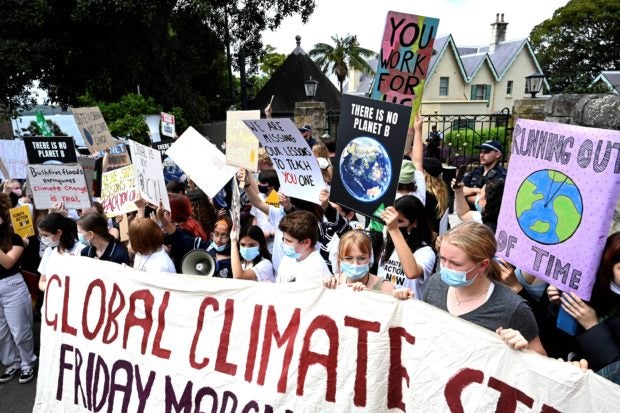 Schoolchildren shout slogans in front of the prime minister’s house in Sydney on March 25, 2022, during a strike and protest by students highlighting inadequate progress to address climate change. AFP

SYDNEY — Climate change protesters marched in Sydney on Monday forcing police to close major roads in the city centre while morning traffic through the landmark Sydney Harbor Bridge was disrupted after a woman chained herself to her vehicle.

Eleven people were arrested, including the woman who police said allegedly put a bicycle lock around her neck and the steering wheel of a vehicle that was blocking all city-bound lanes. The vehicle has since been removed.

Blockade Australia said the rally was in response to “Australia’s continued blocking of climate action”. The protests will continue all week, the organizers said on Twitter.

Climate change is a contentious issue in Australia which is one of the world’s biggest carbon emitters on a per capita basis and is the world’s top exporter of coal and liquefied natural gas.

Under a new Labor government, Australia early this month raised the amount of carbon emissions it aims to cut by 2030, bringing the country more in line with other developed economies’ Paris climate accord commitments.