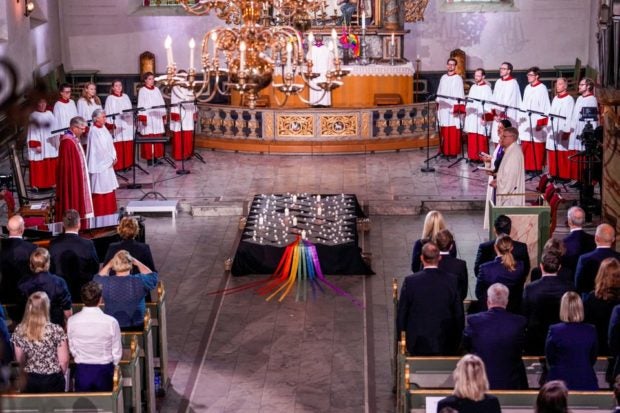 A mourning service is held at Oslo Cathedral, after a shooting at the London Pub, in Oslo, Norway, June 26, 2022. Javad Parsa/NTB/via REUTERS

OSLO — The deadly rampage by a gunman at a gay bar and another venue in central Oslo on Saturday will not put an end to the fight for the rights of all individuals to live a free and safe life, Norwegian Prime Minister Jonas Gahr Stoere said on Sunday.

Police on Sunday also questioned the suspect, a 42-year-old Norwegian citizen of Iranian origin, the second time they did so since his arrest.

The man, whom police have described as a radicalized Islamist with a history of mental illness, is accused of killing two and injuring 21 early on Saturday, when Oslo was due to hold its Pride parade.

Speaking at a special service held at Oslo’s cathedral, Stoere said the attack may have put an end to the official Pride parade, which was called off after the attack, but it did not stop the fight “against discrimination, prejudices and hate”.

The premier, dressed in black, talked about the thousands of people that spontaneously demonstrated on Saturday in the streets of Oslo, waving rainbow flags and laying flowers at the crime scene to honor the victims.

“During the day, the city was full of people who wanted to speak out, about sorrow and anger, but also about support and solidarity and the will to continue on fighting, for the right of every individual to live a free life, a safe life,” he said.

“These misdeeds remind us of this. This fight is not over. It is not safe from dangers. But we are going to win it, together,” he told the audience – which included mourners, Crown Princess Mette-Marit, ministers and Church of Norway leaders – in the cathedral which was decorated with rainbow flags.

Authorities have said they had been aware of the suspect since 2015 and that he had been part of a network of Islamist extremists in Norway.

The suspect’s lawyer, John Christian Elden, was not immediately available for comment when contacted by Reuters.

He told broadcaster TV2 it was not possible to draw any conclusions about the motives or reasons for the attack. “It is far too early to do so,” he said.

The suspect is accused of murder, attempted murder and terrorism. It is not known what he says of the accusations.

He will be subjected to a psychiatric evaluation in the coming days as part of the investigation, police said.

The questionings on Saturday and Sunday came to a quick end, his lawyer said.

“He did not want any recording of the questioning, neither by video nor by sound, because he thought the police would manipulate it,” Elden told TV2 on Saturday.

Read Next
No due process in NTC’s order to block access to red-tagged sites, says lawyer
EDITORS' PICK
vivo brings to the Philippines a powerful smartphone with a slimmer body, the vivo Y02s for only PHP 6,499
Palace: Biggest supermarkets in PH commit to sell sugar at P70 per kilo
What to watch out for when selecting a video surveillance solution
Heads may roll at BOC, says Palace if sugar smugglers are allowed to use recycled import permits
House energy committee chair Arroyo bats for cheap electricity
DOH reports increase in daily COVID-19 deaths, mostly unvaxxed
MOST READ
Brian Poe-Llamanzares receives his PhD in Public Administration
Alyssa Valdez to miss Creamline’s AVC Cup campaign
Metro Manila’s No. 1 wanted man arrested, says NCRPO
Rhian Ramos on new beau Sam Verzosa
Don't miss out on the latest news and information.