Corona got P5M for services in Senate, House electoral tribunals 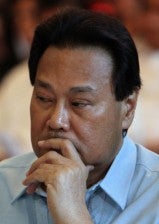 Irene Guevarra, secretary of the Senate Electoral Tribunal (SET), told the Senate impeachment court that Corona received P1.6 million in monthly expense allowance, reimbursements for extraordinary and miscellaneous expenses, and allowable expenses as member of the body from February 2008 to April 2009.

Girlie Salarda, secretary of the House of Representatives Electoral Tribunal (HRET), said that Corona received P3.3 million in similar allowances when he served as a member there from January 2007 to February 2008, and from April 2009 to November 2009, and as chair from November 2009 to May 2010, or a total of four years.

Hearing this, Senate President Juan Ponce Enrile, the presiding officer, noted that each year should be reflected in the statement of assets, liabilities and net worth (SALN) of Corona.

Defense lawyer Joel Bodegon presented Guevarra and Salarda to prove that the Chief Justice had other sources of income to purchase real estate properties.

Guevarra, a former student of Corona at the Ateneo de Manila University College of Law who topped the bar in 1981, said Corona and SET members each received a monthly expense allowance of P20,000; a reimbursement for monthly extraordinary and miscellaneous expenses of P19,166.67 and reimbursement for monthly additional allowable expenses of P82,000, or a total P121,166.67.

In the 14 months as SET member, Corona received a total of P1,696,333.38. He was among three justices and six senators who constituted the tribunal, she said.

Under cross-examination by private prosecutor Antonio Hernandez, Guevarra said the monthly expense allowance was an allowance, and this was not liquidated but was justified by a certification reflected in the tribunal payroll.

“We did not consider it income and did not withhold taxes from it,” Gueverra said.

The extraordinary and miscellaneous expenses and allowable expenses are of the same nature as the expense allowance, and their disbursement was accompanied by a certification in the payroll, she added.

“These are reimbursements for expenses that the chair or the member should have expended for his office in relation to his duties as a member of the tribunal,” Guevarra said.

Not for personal use

Asked if Corona could not use these allowances for his personal use, she said that “under the law, that should be the case.”

Guevarra said that the monthly expense allowance belongs to the personal services category, while the two others fall under miscellaneous and other operating expenditures.

Senator Ralph Recto said the monthly allowance could be taken home, while two others “should be spent.”

She confirmed that these were not taxable. She said that a certification was necessary for Corona to claim reimbursements for the extraordinary and miscellaneous expenses and allowable expenses.

The HRET is composed of three Supreme Court justices and six members of the House.

Hernandez suggested that Corona’s lawyers were attempting to show that the Chief Justice had the capacity to purchase assets that did not appear in his SALN. But he noted that a significant portion of the more than P21 million that Corona had received consisted of allowances that had specific allocations.

In her testimony on Monday, Supreme Court budget officer Araceli Bayuga said Corona received a total of P21,636,781.45 in salaries, allowances and other benefits from the time he was appointed associate justice in 2002 until last year.

During  cross-examination on Wednesday, Bayuga reiterated that among the allowances Corona received include personnel economic relief assistance (Pera), representation allowance-transportation allowance (Rata) as well as extraordinary and miscellaneous expenses.

Hernandez asked whether the allowances included expenditures for “public relations, meetings and seminars.”

Hernandez said even Corona’s subscription to professional journals should be reflected in the liquidation of these allowances.

“The Chief Justice must submit proof of liquidation.  He cannot use the allowance meant for subscriptions for personal whims. He has to make an accounting of where these were spent,” Hernandez asserted.

Bayuga said that the liquidation was included in a “payroll” submitted yearly to the Commission on Audit.

“The Supreme Court’s practice is to submit that (liquidation) through an additional payroll,” she explained.

Hernandez went on to point out that allowances earmarked for specific purposes “cannot be used for vacations abroad.  It has to be used for the office.  He cannot put it in his personal bank account because the funds are not really his.” With reports from Cathy Yamsuan and Cynthia D. Balana