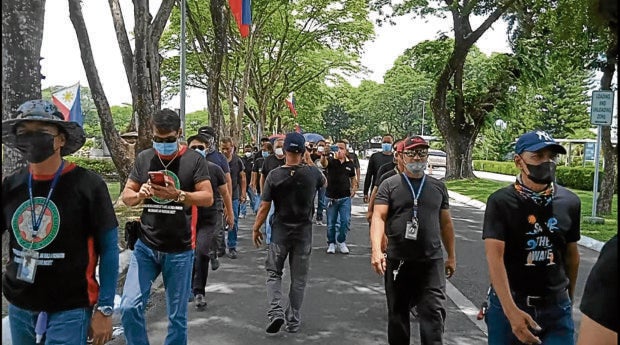 PROTEST | Employees of the state-owned Clark Development Corp. march out of their offices during lunch break on Friday, June 24, 2022, to protest the reduction and removal of their allowances, benefits, and incentives gained through collective bargaining agreements as the government implements a new compensation system based on an executive order signed by President Rodrigo Duterte. —CONTRIBUTED PHOTO

CLARK FREEPORT—Nearly 700 employees of Clark Development Corp. (CDC) here are in danger of losing their retirement incentives and from P4,000 and P8,000 in monthly allowances, benefits, and incentives (ABIs) starting July as the state-owned agency implements a new salary system.

The Governance Commission for GOCCs (GCG), in a letter received by CDC on June 22, informed the agency that it has been authorized to enforce the compensation and position classification system (CPCS) that was based on Executive Order No. 150, signed by outgoing President Rodrigo Duterte in October last year, that approved the CPCS and “index of occupational services, position titles and job grades for GOCCs (government-owned and controlled corporations).”

CDC president Manuel Gaerlan, in an online conference with the agency’s supervisory and rank-and-file unions on Saturday, however, said CDC, on orders of board chair Edgardo Pamintuan, would appeal to the GCG and the Office of the President for a suspension and review of the CPCS.

The CPCS for CDC workers, which the GCG formulated, did not only adjust their job levels with minor salary raises or none at all but also “ended” their existing collective bargaining agreements (CBAs) with the corporation, including their medical and retirement incentives, CDC vice president Mariz Mandocdoc noted in the conference.

Under Section 2 of EO 150, all GOCCs like CDC no longer have the authority to negotiate a CBA or a collective negotiation agreement (CNA) with their workers. The section said that while it recognized “the constitutional rights of workers to self-organization, collective bargaining, and negotiations, the governing board of all covered GOCCs shall not negotiate the economic terms of the CNAs/CBAs with their officers and employees.”

Mandocdoc said CDC created its own CPCS committee but its proposal was not followed. The GCG crafted a new one for CDC that it now asked the corporation to implement.

According to Gaerlan, the employees would each lose about P4,000 to P8,000 a month in ABIs that they earned through their CBAs that could no longer be honored in the CPCS.

Overall, some 655 to 688 direct employees, including managers, would be affected by the CPCS, according to union officials.

But even as the management sided with the employees following their protest walk during lunch break on Friday, Acces has filed a case against CDC for diminution of benefits. The hearing is set for June 30, Acces president Edsel Manalili said.

Manalili said Acces last negotiated for a CBA covering the 2015 to 2020 period. Negotiations for the 2020 to 2025 CBA began in March and was ongoing when they were informed that they would now be covered by the CPCS.

Acces also filed a case against CDC for placing them under the Government Service Insurance System, the insurer of government workers, from the private sector’s Social Security System. ACSP, through its president Victor Barbieto, also demanded a status quo of positions and their existing ABIs while the matter was on appeal.

“[The CDC management] will exhaust all efforts to fight for your welfare,” Gaerlan assured during the online meeting that was also attended by members of the media.

CDC had previously been spared from the Salary Standardization Law, which began three decades ago as it remained a government corporation until President Duterte issued EO 150 on Oct. 1, 2021, supposedly to, among others, remove excessive benefits given to employees and managers of GOCCs.

Mandocdoc said the financial contributions of CDC and its money-earning functions to the national government appeared to “not have been considered” when the GCG approved the CPCS for the corporation.