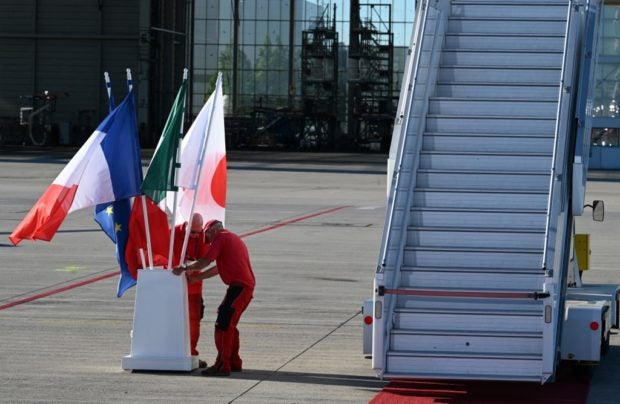 Airport staff set up the flags of Japan, Italy, France and the EU prior to the arrival of G7 leaders at the Franz Josef Strauss Airport in Munich, southern Germany on June 25, 2022, on the eve of the G7 summit. AFP

ELMAU CASTLE, Germany — G7 leaders including US President Joe Biden gather on Sunday in southern Germany, seeking emphatic backing for Ukraine against Russia’s invasion while grappling with the intensifying global fallout of the war.

From soaring inflation to a looming food crisis and energy shortages, the conflict in Ukraine, now in its fifth month, has mired the world in a series of crises.

As the leaders of the Group of Seven most industrialized nations meet at the Bavarian alpine resort Elmau Castle, they will also be confronted with the looming threat of recession as well as pressures over climate change.

On the eve of the gathering, thousands of protesters marched in Munich, about 100 kilometers (60 miles) away, warning leaders against rolling back on climate commitments amid tensions on the energy market as Russia slashes supplies to Europe.

Striking a confident tone, German Chancellor Olaf Scholz, who is hosting the summit, said: “We can make important decisions… if we act as one and with determination.”

Scholz and his counterparts have been locked in months of emergency action since Russia sent in troops to Ukraine on February 24.

While Western allies have hammered the Russian economy with unprecedented sanctions, President Vladimir Putin’s troops have been digging in their heels for a drawn-out war.

Ahead of the talks, British Prime Minister Boris Johnson urged allies not to waver in their support.

“Ukraine can win and it will win. But they need our backing to do so. Now is not the time to give up on Ukraine,” he said, as Britain announced another $525 million in guarantees for World Bank lending later this year.

Ukrainian President Volodymyr Zelensky will make the same plea when he joins in via video-link on Monday.

John Kirby, National Security Council spokesman at the White House, said the G7 will be seeking to hold Russia accountable and to increase the costs and consequences of the war on Putin and his economy.

At the same time, they will be seeking to minimize “as much as possible the effect of these rising oil prices and the way (Putin) has weaponised energy”.

The fallout on the economy will be at the center of the G7’s opening session.

Just six months back, the global economy had been poised for a huge post-pandemic recovery but it was now staring down the barrel of a recession.

“Core problems that are on the top of mind for all of us” include “rising prices, supply chain disruptions all exacerbated by this war in Ukraine”, said Kirby.

Scarred by a reliance on Russian energy that has hampered several European nations including Germany and Italy from going all out to punish Putin’s Russia, the West was also warily looking at China — which it views as a systemic rival.

The G7 leaders, who will head to Madrid right after the summit in Bavaria for a gathering of Nato powers, will also begin addressing the challenges posed by China.

“The impact that China’s coercive economic practices, use of forced labour, intellectual theft — all those are front and center for the G7, and I think you’re going to see China very much at the forefront as the G7 goes on,” said Kirby.

As the gulf separating Western allies from Russia and China widens, the G7 will also be looking to broaden its base.

To this end, Scholz has invited the leaders of Argentina, India, Indonesia, Senegal and South Africa to the alpine summit.

While Argentina and Indonesia voted at a crucial UN vote to condemn Russia, the other three abstained.

But all are being directly hit by a looming hunger crisis sparked by the holdup in grain and wheat exports from Ukraine, and India for instance has imposed restrictions on wheat exports.

“We need to keep lines of trade open for products and avoid excessive stockpiling,” noted Kirby.

For many of the G7 leaders, the crises facing the world also provide a distraction from domestic woes.

French President Emmanuel Macron has been weakened at home after his movement failed to obtain an absolute majority at legislative elections a week ago.

Johnson’s Conservatives meanwhile suffered crushing defeats in two by-elections and a staunch ally stepped down after a slew of scandals.

Biden was faced with greater divisions in the US political landscape after the Supreme Court struck down the right to abortion, at a time when he was already struggling to deal with galloping inflation sparked by sky-high oil prices.