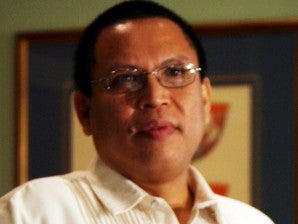 The man who took over the weather bureau following the controversial sacking of its longtime chief has quit, opting to retire as government pushes ahead with critical reforms in the country’s storm warning and disaster preparedness system.

Graciano Yumul, undersecretary for research and development of the Department of Science and Technology (DOST) and supervising official of the weather bureau, has opted to retire early after serving government for 28 years.

“It is with deep regret that I accept the decision of Undersecretary Graciano P. Yumul Jr. to seek optional retirement from government service due to personal reasons,” Montejo said in a statement yesterday.

“With almost 28 years of service in government, Undersecretary Yumul’s career path as professor, scientist, and executive was marked by excellence and dedication and duly recognized by peers from government, academe and the private sector,” Montejo said.

While keeping Yumul’s reasons confidential, DOST said his decision to leave government service was purely personal and was not due to any job-related problem.

Yumul announced his retirement in a brief statement sent to reporters Wednesday. “Please be informed that starting March 12, 2012, I have optionally retired from government service.  Thank you very much for all your help and I hope you keep supporting DOST,” the letter read.

Yumul’s retirement ended his stewardship of the Philippine Atmospheric, Geophysical and Astronomical Services Administration (Pagasa), to which he was appointed in August 2010. At the time, he was the DOST’s chief for research and development since 2006.

Aquino had been dissatisfied with the bureau’s forecast on Basyang, which was first expected to directly hit Northern Luzon but instead brought heavy rains and strong winds to Metro Manila.

Yumul then took on a special assignment as supervising undersecretary for Pagasa when Montejo appointed Nathaniel Servando as the new Pagasa administrator in February 2011.

During his time at Pagasa, Yumul sent daily weather bulletins to reporters and also appeared in live broadcast of weather updates.

Servando remains Pagasa administrator while Amelia Guevara, executive director of the Philippine Council for Industry, Energy and Emerging Technology Research and Development, was appointed officer in charge of DOST’s research and development office.

He also taught at UP and served as associate dean of the UP College of Science and also as director of the UP National Institute of Geological Sciences.

He has earned several awards for his research work in the geosciences.

Presidential spokesperson Edwin Lacierda on Wednesday said there was “no politics” involved in Yumul’s early  retirement.

“There is no issue on the retirement of Usec Yumul,” said Lacierda, adding that the DOST was still looking for a replacement for Yumul. With Christine O. Avendaño