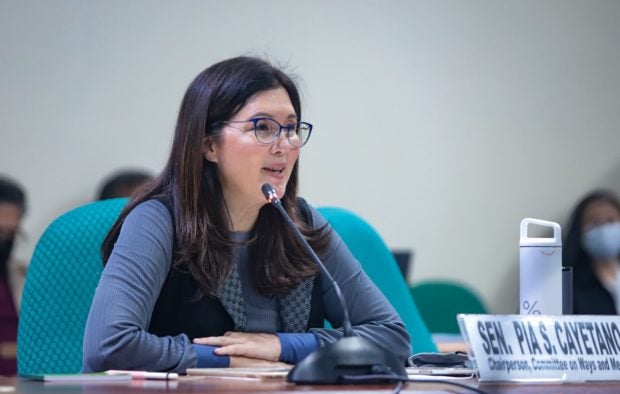 FILE PHOTO: Senator Pia Cayetano presides over a hybrid public hearing Monday, April 25, 2022, on House Bill No. (HBN) 9306, which seeks to grant informers of tax fraud or smuggling P10 million in reward money, and HBN 9171, which seeks to impose excise tax on plastic bags. According to Cayetano, HBN 9306 seeks to amend laws that grant rewards to informants of the violation of the Bureau of Internal Revenue and Bureau of Customs laws by increasing the reward from P1 million to P10 million. “This measure ultimately seeks to improve tax collection efficiency by providing more incentives to informers,” Cayetano said. (Bibo Nueva España/Senate PRIB)

MANILA,  Philippines — Senator Pia Cayetano has reminded colleagues about the importance of “intellectual honesty” as she lamented that copying bills had become a practice in Congress.

According to Cayetano, this is just a “friendly reminder” since she has been making this call even in the past.

A new Congress will open next month.

“Sabi nga nila (They say), it’s the height of flattery if somebody copies your work. So in terms of legislation, I believe that it is the intellectual property din naman (also) of the one who [first] drafted it,”  Cayetano said in a press briefing on Thursday.

(If you would only ask your staff to file a bill that another person already filed, you should at least recognize the original author, the staff who  wrote the bill)

For Cayetano, credit should be given where credit is due.

(You are deceiving the people when you say you filed 1,000 [bills] but 999 of them were done by other people.  Just say the  bills you’re supporting are  good, no problem.)

“Let’s have intellectual honesty naman. And I brought this up how many Congresses ago, nag-agree naman ang colleagues ko (my colleagues agreed). But it’s a reminder to all na (that), let’s follow it, lead by example. It’s a great way to practice honesty,” the senator continued.

She later clarified she has no problems with copying but lawmakers should at least acknowledge the original author of a measure.

In fact, Cayetano said, filing a similar bill to support another measure is being done in the Senate.

(But when you file exactly the same measure without permission, isn’t that a bit devious?)