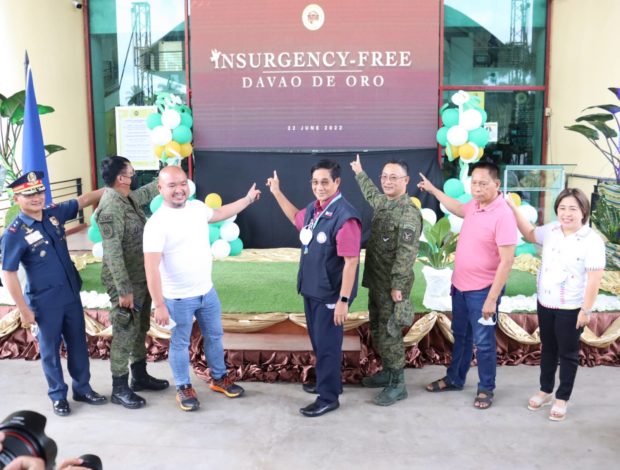 The military and the local government of Davao de Oro made the declaration during a ceremony held at the Provincial Capitol Grounds, in Barangay Cabidianan, Nabunturan town on Wednesday.

The official declaration follows after the eight full-blown New People’s Army (NPA) guerrilla fronts were either dismantled or destroyed, the PA said in a statement.

Authorities also cited the death of Menandro Villanueva, who is the highest ranking NPA leader in Mindanao, and the surrender of two guerrilla front secretaries as factors in dismantling the insurgency in the area.

From 2016 to 2022, the 10th Infantry Battalion units in Davao de Oro figured 159 armed encounters which resulted in 42 killed NPAs, 619 surrendered, 103 captured, 776 firearms recovered, and return to the fold of law of 1,248 NPAs in the barangays, and more than 6,000 members of the underground mass organizations.

In a statement sent to INQUIRER.net, Communist Party of the Philippines spokesperson Marco Valbuena said he would still have to ask the NPA in Southern Mindanao to provide specific information in reaction to the claims of the military.

Valbuena said that there is widespread disenchantment and indignation among the people who are being driven away from their land to give way to the expansion of tourism projects, mining operations, and banana and oil palm plantations in Davao de Oro and across Mindanao.

Thus, the chief information officer of the CPP said that the military “is only fooling themselves when they declare that they have defeated the NPA in Davao de Oro.”

“The people’s war is a fluid war,” he also said.

“Guerrilla units of the NPA can always trade space and time in order to preserve and recover its forces by expanding or shifting to other areas.”