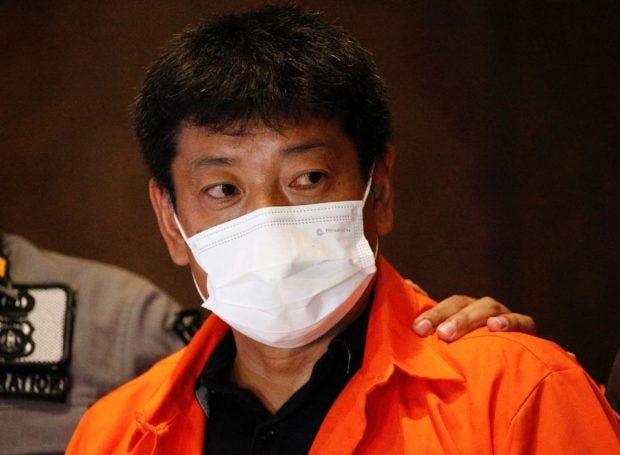 Japanese fugitive Mitsuhiro Taniguchi is deported following his arrest in Indonesia earlier this month for fraud over coronavirus-related subsidies in Japan, at the Directorate General of Immigration building in Jakarta, Indonesia, June 22, 2022. REUTERS

JAKARTA — A Japanese fugitive accused of swindling about $7 million from a pandemic subsidy program was deported from Indonesia on Wednesday, an immigration official said.

Mitsuhiro Taniguchi, who was arrested by Indonesian police on the island of Sumatra earlier this month, boarded a Narita-bound flight from Jakarta, Indonesian immigration official Douglas Simamore said in a statement.

“This man is being deported because the Japanese government has revoked his passport and he has no stay permit. From now on, he will be on our deterrence list,” he said.

Taniguchi is accused by Japanese authorities of helping to steal 960 million yen ($7 million) intended for small businesses impacted by the COVID-19 pandemic, according to Kyodo news.

The Japanese national allegedly submitted thousands of false applications for the subsidy programme and fled for Indonesia in October 2020 after he was put on a police wanted list. Taniguchi’s ex-wife and two sons have been arrested in connection with the allegations, Japanese media have reported.

Indonesian authorities said he had told residents in Sumatra that he wanted to invest in fisheries in the area.