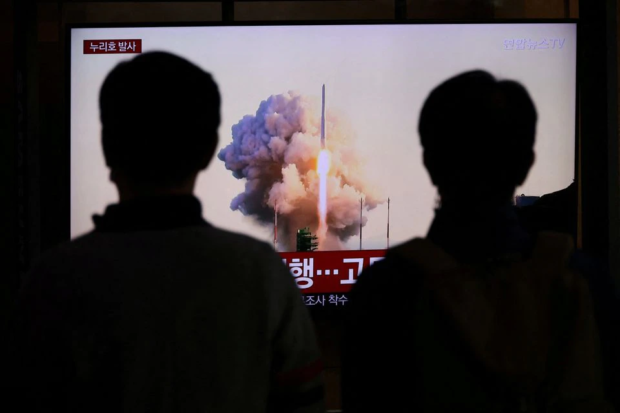 People watch a TV broadcasting a news report on the KSLV-II NURI rocket launching from its launch pad of the Naro Space Center, at a railway station in Seoul, South Korea, October 21, 2021. REUTERS FILE PHOTO

SEOUL — South Korea is set for a second test launch of its domestically produced Nuri space rocket on Tuesday, eight months after the first test successfully blasted off but failed to place a dummy satellite in orbit.

On Monday, the rocket was erected on its launch pad at the Naro Space Center on the southern coast of South Korea. The test had been scheduled for last week, but was scrubbed in the hours before launch because of a problem with an oxidizer tank sensor.

Officials will decide Tuesday afternoon whether to proceed.

The three-stage KSLV-II Nuri rocket, designed by the Korea Aerospace Research Institute (KARI) to eventually put 1.5-ton payloads into orbit 600 to 800 km above the Earth, is a cornerstone of the country’s plans to jumpstart its space program and achieve ambitious goals in 6G networks, spy satellites, and even lunar probes.

Nuri is key to South Korean plans to eventually build a Korean satellite-based navigation system and a 6G communications network. The country also plans to launch a range of military satellites, but officials deny that the Nuri has any use as a weapon.

South Korea is also working with the United States on a lunar orbiter, and hopes to land a probe on the moon by 2030.

Space launches have long been a sensitive issue on the Korean peninsula, where North Korea faces sanctions over its nuclear-armed ballistic missile program.

In March, South Korea’s military separately oversaw what it said was its first successful launch of a solid-fuel space-launch rocket, another part of its plans to launch spy satellites.

In Nuri’s first test in October, the rocket completed its flight sequences but failed to place the test payload into orbit after its third-stage engine burned out earlier than planned.

The stakes will be higher in Tuesday’s test, as in addition to a dummy satellite, Nuri will carry a rocket performance verification satellite and four cube satellites developed by universities for research.

KARI has said it plans to conduct at least four more test launches by 2027.