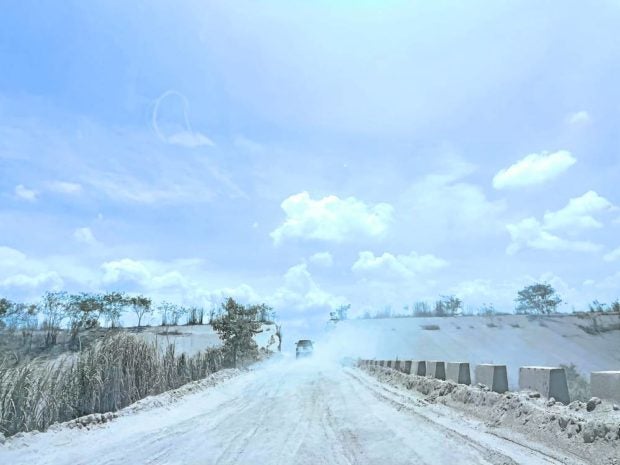 PATHWAY | Quarry trucks use a gap at FVR Megadike’s transverse dike on the structure’s western section as a shorter route to transport sand. The megadike was built 26 years ago to protect the Pampanga capital city of San Fernando and its nearby areas from major lahar flows. (Photo by TONETTE OREJAS / Inquirer Central Luzon)

BACOLOR, Pampanga —Alex Pascua has settled back in the middle of the FVR Megadike, touted to be Pampanga’s last defense against lahar.

The 55-year-old farmer is aware that he lives, in his own words, within a catch basin of lahar (rapidly flowing mixture of rock debris and water from a volcano) from Mt. Pinatubo that erupted 31 years ago on June 15, 1991.

The resulting hazard of the world’s second biggest eruption in the 20th century was what led to the rise of the FVR Megadike, according to Isabelita Manalo, a Department of Public Works and Highways (DPWH) engineer, who has been with the agency since the lahar-containing project was conceived.

This was after lahar overtopped the Gugu Creek and buried alive many people in the village of Cabalantian on Oct. 1, 1995 at the height of Typhoon “Mameng” (international name: Sybil).

Completed in 1996, the megadike is considered the Philippine government’s first emergency engineering intervention against the deadly flows after abandoning sabo or debris-retention dams. 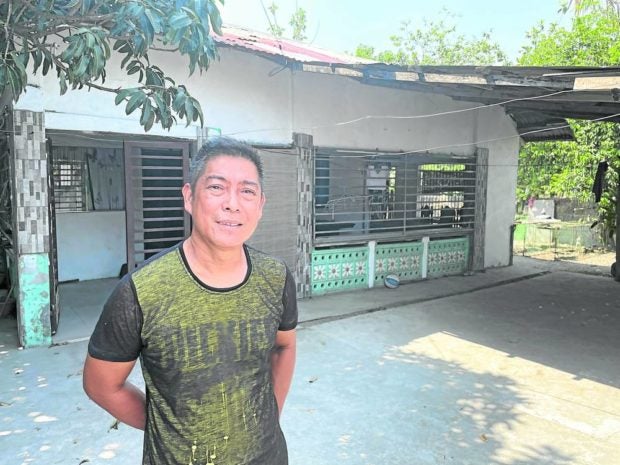 BACK HOME Alex Pascua returns to his village inside FVR Megadike in Bacolor, Pampanga, growing rice and vegetables 31 years after the eruption of Mt. Pinatubo. —TONETTE OREJAS

Pascua is not alone in reversing the diaspora in Barangay Concepcion. The 2010 census counted 118 residents, increasing to 50 or so families last month.

After making the rounds of evacuation centers, he and his family ended up in Madapdap resettlement in Mabalacat City, some 30 kilometers north of Bacolor. More than half of the town’s 39,460 residents are scattered in 10 resettlements all over the province, with 5,903 people living in 10 villages trapped inside the megadike.

Pascua, who returned in 2017, braved the fear of living in harm’s way because he wanted to feel the “peace of being home.”

Concepcion is in the middle of the eastern and western lateral dikes. These were built 5 kilometers apart, spanning 52 km.

A transverse dike connects the two lateral dikes before spilling downstream of the Gugu Creek where much of the water of the Pasig-Potrero River empties. Minimal water drains to the Baluyut channel between Bacolor and Guagua towns. Concepcion is nearer the eastern dike’s Spillway 3, which works like a sand pocket.

“I can sleep here even when it rains because we are now on high ground,” he said.

The 16 revived barangays inside the megadike in Bacolor, Sta. Rita and Porac towns, as well as the 24,331 residents there, are concealed from the Gapan-San Fernando-Olongapo Road (renamed Jose Abad Santos Avenue). Tall grass and fruit trees hide the villages from motorists’ view.

People have moved back in and a lot of activities are ongoing inside and adjacent to the FVR Megadike, although the Philippine Institute of Volcanology and Seismology (Phivolcs) has repeatedly discouraged people from living in the area.

The 26-year-old FVR Megadike’s primary function is to ensure the safety of the 1.157 million people living in two cities and seven towns adjacent to the river. They account for more than half of Pampanga’s 2.198 million residents.

Geologist Norman Tuñgol, who died in a helicopter crash together with then Phivolcs chief Raymundo Punongbayan in 2005, had said that among all the river basins around Pinatubo, “lahar risks in the Pasig-Potrero have been the greatest owing to the large urban communities lying on its alluvial fan, which is composed of lahar deposits from previous eruption episodes of Mt. Pinatubo.”

The 1991 eruption put in 302 million cubic meters of pyroclastic materials at a depth of 200 meters in the Pasig-Potrero River, according to the US Army Corps of Engineers.

The US Geological Survey said these estimates were a fraction of the 5 cubic kilometers, equivalent to 500 million dump trucks full of ash and rock fragments, that the volcano belched out on the slopes in Pampanga, Tarlac and Zambales provinces in 1991.

Secondary explosions in October 1993 rerouted all flows from the Abacan and Sacobia Rivers to the Pasig-Potrero River, geologist Kelvin Rodolfo said.

The megadike was built to block the massive inflow of lahar, estimated to be about 50 million cubic meters, Nippon Koei said in a 2015 study on a proposal to revert to the river’s original alignment. It said 20 million cubic meters of lahar deposits were eroded in 1997.

“No big lahar has occurred [from 1998 to 2015],” Nippon Koei said in its final report for the Pinatubo Hazard Urgent Mitigation Project-Phase III.

Using satellite images, the “shrinking of the lahar flow area started in 1998, and the run-off to the downstream area was decreased. However, minimal lahar events continued to occur near the Mancatian Bridge [in Porac town] until 2001,” it said in a 2019 report. 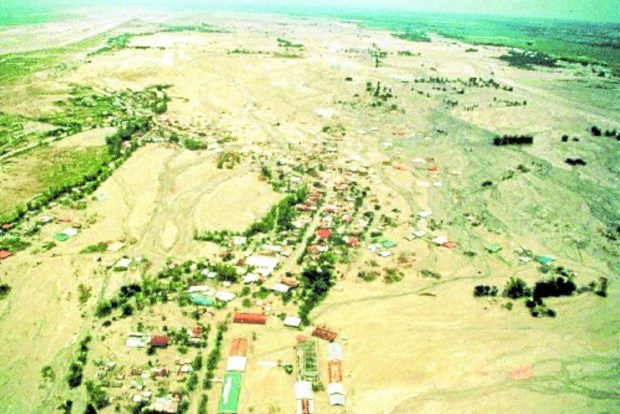 TRAGEDY This photo from the book, “Fire and Mud,” by the Philippine Institute of Volcanology and Seismology and the US Geological Survey shows Mt. Pinatubo’s lahar overtopping the Gugu Creek and burying Bacolor during the onslaught of Typhoon “Mameng” on Oct. 1, 1995, leaving many people dead in what is known as the Cabalantian Tragedy.

The FVR Megadike, Rodolfo pointed out, has an “undeserved reputation for effectively containing the lahars, thereby limiting the damage to Bacolor.”

“It is important to note that the lateral dikes of the FVR Megadike complex have not yet been seriously tested by lahars,” Rodolfo said in a report presented in an international conference in 2003.

But in 2002, he said, relatively mild storms generated lahars that stripped the concrete armor off a 100-meterlong portion of the eastern lateral megadike.

“Had the rains lasted a day or so longer, the dike could have been ruptured and sent lahars into San Fernando,” Rodolfo said.

He added: “The damaged portion was repaired more strongly than it had originally been built, but the next lahars cannot be expected to attack only at that point along a 22.5-km long structure.”

Geologist Ronnie Torres and his colleagues confirmed these through remote sensing data, saying that “lahar events from 1998 to 2001 seasons were mostly channel-confined and the overall channel configuration of the Pasig–Potrero River system did not change dramatically from 1997.”

The lahar hazard appeared minimal or none at all, according to Nippon Koei. In its 2015 study, it noted that the “mudflow condition is no longer considered in the study because no huge lahar events have been occurring in the Pasig-Potrero River since August 1997.”

“Lahar deposited area in the megadike system is being changed to grassland and agricultural land,” consultants pointed out in the 2015 study that used maps including 2014 data from the three-dimensional (3D) mapping project called, “Disaster Risk Assessment, Exposure and Mitigation-Light Detection and Ranging Technology. “

In all, the DPWH has spent about P8 billion to construct and strengthen the FVR Megadike, spending another P50 million yearly for maintenance.

“It is very much stable,” Manalo said when asked about the current state of the structure, assuring it can withstand severe rain and strong earthquakes. “Water is what is managed now in the megadike. It is proving to be effective as a flood-control measure.”

The task of ensuring that the FVR Megadike remains an effective lahar catchment is “mainly the work of the DPWH,” said Phivolcs chief Renato Solidum.

The capital city of San Fernando, Solidum said, is “generally safe from lahars, but, may be prone to siltation and related flooding during the rainy season and prolonged or intense rainfall due to passage of tropical cyclones.”

But Rodolfo, whose science is uncompromising, cautioned: “Are the lahars over? Future storms may remobilize this accumulation into large lahars. The lahar threat may last for years or decades before it becomes minimal and remains so for centuries until the next eruption.”

Tour brings back Bacolor past buried by Pinatubo eruptions, lahar

Phivolcs: Pinatubo lahar threats not over