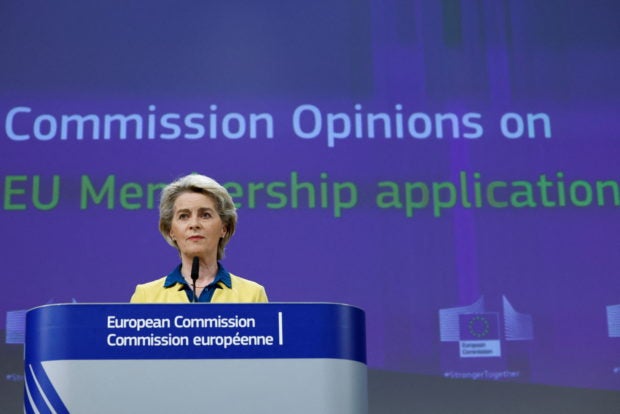 BRUSSELS/KYIV, Ukraine  – The European Union gave its blessing on Friday for Ukraine and its neighbour Moldova to become candidates to join the bloc, reaching out deep into the former Soviet Union for what would be a major geopolitical shift following Russia’s Ukraine invasion.

“Ukrainians are ready to die for the European perspective,” European Commission President Ursula von der Leyen told a news conference, wearing Ukrainian colours: a yellow blazer over a blue blouse. “We want them to live with us the European dream.”

In a grievance-filled speech in St Petersburg, Russian President Vladimir Putin railed at the West, and the United States in particular, but sought to play down the EU issue.

“We have nothing against it,” he said. “It is not a military bloc. It’s the right of any country to join economic union.”

Ukraine applied to join the EU four days after Russian troops poured across its border in February. Another four days later, so did Moldova and Georgia – smaller ex-Soviet states also contending with separatist regions backed by Russia.

Though only the start of a process that may take many years and requires extensive reforms to conform with a host of standards ranging from judicial policy to financial services and food safety, the EU decision puts Kyiv on course to realise an aspiration that would have been out of reach just months ago.

“Precisely because of the bravery of the Ukrainians, Europe can create a new history of freedom, and finally remove the grey zone in Eastern Europe between the EU and Russia,” tweeted Ukrainian President Voldymyr Zelenskiy.

One of Putin’s main objectives in launching an invasion that has killed thousands of people, destroyed cities and driven millions to flight was to halt the West’s eastward expansion via the NATO military alliance.

Friday’s announcement underlined how the war has had the opposite effect: convincing Finland and Sweden to join NATO, and now the EU to embark on potentially its most ambitious expansion since welcoming Eastern European states after the Cold War.

Leaders of EU countries are expected to endorse the membership candidacy decision at a summit next week.

In his St Petersburg speech, Putin denounced the United States for considering itself “God’s emissary on Earth” and said Western intransigence had given Russia no choice but to launch its “special military operation” in Ukraine.

He also questioned whether it was “advisable” for the EU to permit Ukraine to join, saying Kyiv would need huge economic subsidies that other EU members may not be willing to give.

Adding fuel to the global showdown, Russian media broadcast images of what they said were two Americans captured while fighting for Ukraine. “I am against war,” both men said in separate video clips posted on social media.

EU membership is not guaranteed – talks have been stalled for years with Turkey, a candidate since 1999 – but if admitted, Ukraine would be the EU’s largest country by area and its fifth most populous.

All three ex-Soviet hopefuls are far poorer than existing EU members, with per capita output around half that of the current poorest, Bulgaria. They also have recent histories of volatile politics, organised crime and conflicts with Russian-backed separatists.

But in Zelenskiy, 44, and Sandu, 50, Ukraine and Moldova have pro-Western leaders representing a generation that came of age outside the Soviet Union.

The latest foreign dignitary to visit Kyiv was British Prime Minister Boris Johnson, who offered training for Ukrainian forces and said Britain would stand by the Ukrainian people “until you ultimately prevail.”

In an online article in Foreign Policy on Friday, Ukrainian Foreign Minister Dmytro Kuleba stressed it was important that the West not “suggest peace initiatives with unacceptable terms” – an apparent reference to remarks by French President Emmanuel Macron this month that Russia must not be humiliated if a diplomatic solution was to be found.

Instead, it should help Ukraine win, not just by providing heavy weapons, but by maintaining and increasing sanctions against Moscow.

“The West cannot afford any sanctions fatigue, regardless of the broader economic costs,” he said. “Right now, it is clear that Putin’s path to the negotiating table lies solely through battleground defeats.”

Within Ukraine, Russian forces were defeated in an attempt to storm Kyiv in March but have since refocused on the Donbas region in the east, which Moscow claims on behalf of separatist proxies, using its artillery advantage to blast their way into cities in a punishing attritional phase of the war.

Ukrainian officials said their troops were still holding out in Sievierodonetsk, site of the heaviest recent fighting, but it was impossible to evacuate more than 500 civilians trapped inside a chemical plant due to shelling and heavy fighting.

Regional governor Serhiy Gaidai also said in an online post on Friday a key highway out of Sievierodonetsk’s sister city of Lysychansk was now impassable due to Russian shelling.

In the south, Ukraine has mounted a counter-offensive, claiming to have made inroads into territory seized by Russia.

Ukraine it had struck a Russian vessel bringing soldiers, weapons and ammunition to Russian-occupied Snake Island, a strategic Black Sea outpost, its first successful strike with a Western-supplied anti-ship missile.