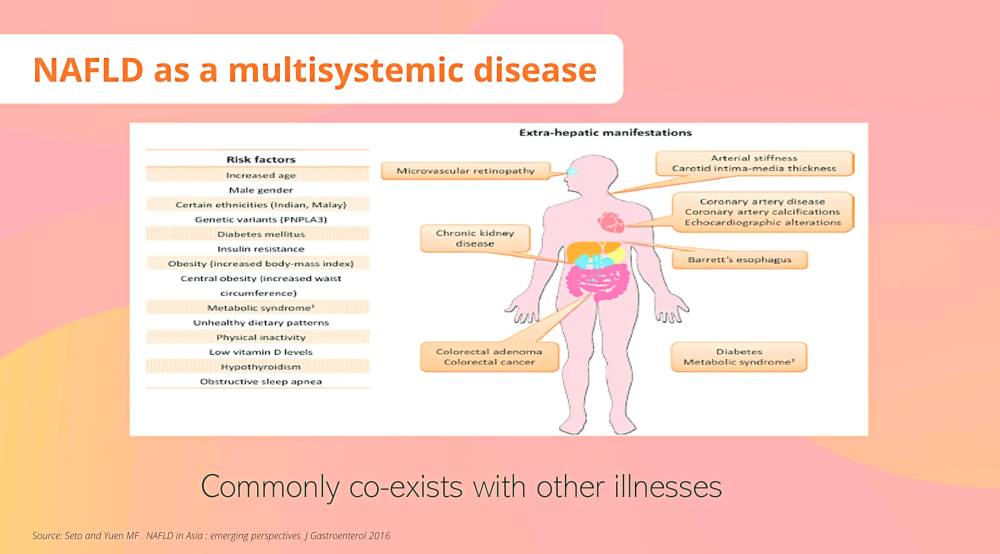 ‘GROWING CONCERN’ A primer on nonalcoholic fatty liver disease (NAFLD) presented on Thursday in a webinar organized by the Hepatology Society of the Philippines.

Gastroenterology and hepatology experts have raised a “growing concern” over the increased risk of fatty liver disease among Filipinos who gained weight and developed unhealthy habits due to quarantine restrictions in the early part of the COVID-19 pandemic.

This is within the range of the global rate of 15 percent to 30 percent, but what is concerning is that “some of them may already have fatty liver disease but are unaware of it,” Payawal said in a webinar organized by the Hepatology Society of the Philippines.

“This is a growing concern,” she said. “There were a lot of things that we needed to address [even] before the pandemic. The WHO (World Health Organization) had already earmarked projects for noncommunicable diseases. In fact, most of the strategies were aimed at noncommunicable diseases. But during the pandemic, these were sidelined.” The limitations during the pandemic “definitely” affected clinical diagnosis and detection, Payawal said, citing the current crop of patients with uncontrolled metabolic disorders, such as liver diseases and cancer as well as diabetes and colon diseases.

About 18 million Filipinos are considered obese and overweight, and they are the ones highly susceptible to NAFLD, she said. But those with preexisting illnesses, such as diabetes, obesity and hypertension, are also at risk because fatty liver is a “multisystemic disease.”

There are two types of NAFLD, a condition caused by fat buildup in the liver: the nonalcoholic fatty liver, and the “more advanced” nonalcoholic steatohepatitis, or NASH.

Both types indicate that an individual has “too much fat” stored in the liver cells, but NASH means that the liver is already damaged.

“Having small amounts of fat in the liver is normal, but it becomes a problem if more than 5-10 percent of the liver’s weight is fat,” Dr. Edhel Tripon, past president of the Hepatology Society of the Philippines, said in the same webinar.

According to Tripon, lifestyle plays a key role in developing fatty liver, which often has no symptoms in its early stage. Lifestyle changes and unhealthy habits developed during the quarantine in the last two years that resulted in weight gain may also contribute to this disease, aside from genetic factors.

“I’ve seen this in a lot of patients … who are still within the normal weight categories, but gained like 5-10 percent of weight from prepandemic [times] because of working from home and no longer [working out]. These patients are at risk for fatty liver,” she said.

Per recommendations by medical studies, “a comprehensive lifestyle approach” to preventing and managing fatty liver is cutting down on calories, sugar and alcohol, as well as increasing physical activity and consumption of black coffee, which has been found beneficial to liver health, Tripon said.

“If you’re overweight,” she said, “you have to be burning more calories than you’re taking in.” For people with diabetes, NAFLD increases the chance of developing heart ailments.

NASH can lead to serious problems, such as fibrosis (the persistent inflammation that causes scar tissue around the liver and nearby blood vessels), and cirrhosis (the most severe stage, occurring after years of inflammation). In cirrhosis, the liver shrinks and becomes scarred and lumpy. The damage is permanent and can lead to liver failure and liver cancer.

Fibrosis or cirrhosis can take years to develop, which is why physicians recommend lifestyle changes to prevent the condition from getting worse.

Usually, there are no symptoms in the early stages of NAFLD. But people with NASH or fibrosis may experience a dull ache in the top right of the stomach (over the lower right side of the ribs), extreme tiredness, and unexplained weight loss. If cirrhosis develops, the more severe symptoms include yellowing of the skin and the whites of the eyes (jaundice), itchy skin, and swelling in the legs, ankles, feet or stomach. —With a report from Inquirer Research

Mental health in a time of pandemic: The invisible suffering