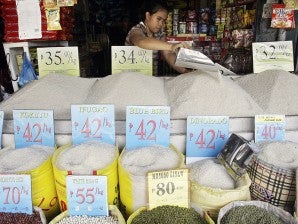 A store attendant scoops rice for sale in a store in suburban Quezon City north of Manila, Philippines. The Oxfam, an international aid agency, warned of a looming food crisis in the Philippines, where farms are shrinking, the population grows by 2 million a year and half of families already spend 56 percent of incomes on food. AP/PAT ROQUE

If we want a food-secure future, secure agriculture.

The prospect of the country’s food system failing at a time of growing hunger crisis worldwide has galvanized a public-private partnership aimed at changing the way the country’s leaders envision food security for the Philippines.

“The Department of Agriculture alone cannot achieve its goal of food security for Filipinos. That’s why we are ready and willing to listen to our farmers and suppliers, the private sector, because only true private-public partnerships will take us to that goal,” said Agriculture Secretary Proceso Alcala.

The most recent food summit, or the Agriculture and Fisheries 2025 (AF2025), held last February, brought up creative solutions and achievable goals for nurturing agriculture, still seen as the only way to ensure a food-secure future for the country amid soaring food prices and financial shocks that are seen to become more pronounced.

The multisectoral AF2025 focused on defining the goals, strategies and priority activities for the agriculture and fisheries sector in the next 15 years, and in enhancing the partnership between the private sector, particularly the farmers, fisherfolk and agribusiness, and government.

The beauty of it

Pangilinan and Mendoza are the agricultural committee chairs at the Senate and the House.

According to Pangilinan, the beauty of AF2025 is that where there used to be division and lack of coordination even within government, both the legislative and executive branches are now working with the private sector to promote agriculture.

With the changes, Pangilinan hopes that the young would be enticed to go into agriculture, noting that the average age of farmers is 57.

For a new generation of farmers to take up the job of feeding the country, agriculture must be shown to be exciting and profitable, the senator said.

Alcala said one of the changes is that the government is making actual investments and linking the small farmers with other stakeholders in a complete supply chain.

“It’s sad that agriculture used to be overlooked. Agriculture takes up only about 2.5 percent of the total budget but its contribution to the GDP is about 18 percent,” he said.

If you include agribusiness, the sector’s contribution to GDP is actually 70 percent, Pangilinan said. It employs up to 70 percent of the country’s labor force, he added.

“The truth is that we are still an agricultural economy,” Alcala said. “It’s time we start placing our bet in this sector.”

Pangilinan said that it was only in 2009 that the national budget started complying with Afma, which prescribes that agriculture must be allotted P20 billion a year on top of the regular agriculture budget.

He said agriculture is asking for a bigger budget next year and it is getting strong support from President Aquino.

“There are marching orders to the DBM to add to our budget,” Alcala said.

The agriculture department is also investing in new programs.

Key innovations include new rice technologies (to achieve rice sufficiency by 2013), traceability for imported and local agricultural products, farm-to-sachet systems for vegetables (unsold vegetables from chosen regional centers will be cooked and packaged for the Department of Social Welfare and Development’s food distribution programs), and consolidation of small farms for contract-growing arrangements with large food companies.

There is also a push to make the agriculture budget “more equitably distributed to other commodity groups.”

Right now, rice takes up more than 40 percent of the agriculture budget.

La Frutera operates in the Autonomous Region in Muslim Mindanao (ARMM) and has succeeded in getting Muslims, Christians and some former rebels to work together.

“Most people in the private sector say there should be peace first before we invest. But our approach is that peace and investment go together and build on each other,” said Bacani.

He noted how a World Bank study said that it takes one generation to stabilize conflict situations before the private sector can come in.

“In our case, we took a risk. Government helped in talking to all stakeholders, including rebel leaders. Now, seeing through our operations that businesses can flourish in Mindanao, a palm oil plantation has been established beside us,” Bacani said.

Bounty Fresh director Edwin G. Chen said that from a small family operation, the poultry farming firm has ventured into food retail through company-owned rotisserie stores under the trade name “Chooks-to-Go” to ensure demand for the company’s dressed chicken.

Chooks-To-Go now has 1,100 outlets, which were rolled out over three years. The target is to reach 1,500 stores within 2011, and to encourage small farm holders to go into contract growing with Bounty Fresh.

Chen, who is also president of the Pork Producers Federation of the Philippines, said the livestock industry is also in talks with government on possible PPPs for much-needed slaughterhouses and other out-of-farm facilities.

He said backyard farmers, which comprise 70 percent of the livestock industry, are stuck with the traditional way of just selling live swine, which means they usually lose out to the trader.

Alcala said the government is eager to invest in facilities that would cut out the middlemen or at least minimize the chances for undue price manipulation, which disadvantages both farmers and consumers.

The “old, traditional and safe” ways will no longer work, Alcala said. As government is now investing in innovative systems and facilities, so too must farmers and agribusiness owners, he said.

Only those who take the risks stand to reap the benefits of this inclusive, innovation-centered paradigm for agriculture, Pangilinan said.

And if agriculture earns a new face as an innovation-driven, profitable industry, it will surely attract the youth, the senator said.

This, Alcala said, is what will push the Philippines toward a food-secure future where those who do work need not be poor and hungry.