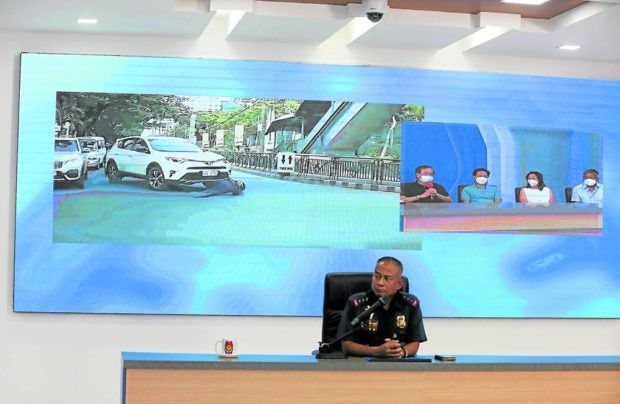 FINALLY | Jose Antonio Sanvicente, the driver (in blue shirt) wanted by the police for escaping after running over a security guard finally shows up on Wednesday at Camp Crame with his parents and apologized to his victim 10 days after the incident. Philippine National Police officer in charge Lt. Gen. Vicente Danao Jr., who angrily demanded his surrender, watches calmly a press conference where Sanvicente’s lawyer, Danilo Macalino (in black shirt), did most of the talking. (Photo by NIÑO JESUS ORBETA / Philippine Daily Inquirer)

MANILA, Philippines — A 34-year-old man who was seen on a viral video driving a car and running over a security guard manning traffic close to a mall in Mandaluyong City finally presented himself on Wednesday to the police, who had been searching for him for the past 10 days after the hit-and-run.

Jose Antonio Sanvicente, accompanied by his parents and a lawyer, showed up at the Philippine National Police headquarters in Camp Crame, Quezon City, and apologized to security guard Christian Joseph Floralde.

Sanvicente was not locked up by the police and walked free from the police camp after a half an hour press conference with PNP officer in charge Lt. Gen. Vicente Danao Jr.

“My apologies for what happened. My apologies to Mr. Floralde and his family,” Sanvicente said, speaking through his face mask.

It was his lawyer, Danilo Macalino, however, who did most of the talking. Macalino explained that whatever statements made by Sanvicente during the press conference might prejudice the cases against him in connection with the June 5 incident.

On the part of the PNP, Danao said they considered the case “solved.” After his angry tirades against Sanvicente for hiding after the incident and suspecting him of being a drug addict without basis, Danao declined making further comments.

“So, we are now leaving to the prosecutor’s office and to the courts, to answer the matters at hand,” a calmer and composed Danao told reporters.

“We do not want to further comment because it might prejudice the results of the matter at hand,” he said.

Danao said that the police could no longer detain Sanvicente because the time for that had already lapsed.

The police charged Sanvicente with frustrated murder and abandonment of his victim.

The period during which an arrested suspect can be detained before he is booked for inquest for frustrated murder is 36 hours after the alleged crime.

The PNP also charged security guards of an upscale residential area with obstruction of justice for stopping officers trying to get to the home of Sanvicente’s father, whose address appeared on the vehicle’s registration papers.

Macalino said his client would explain his side through a counteraffidavit on June 17 during the preliminary investigation before the Mandaluyong prosecutor.

The white Toyota RAV4 van with plate No. NCO 3781 owned and driven by Sanvicente during the hit-and-run was turned over to the PNP Highway Patrol Group.

Floralde, 31, was directing traffic at the intersection of Julia Vargas Avenue and St. Francis Street in Mandaluyong at around 4 p.m. on June 5 when he was hit by the car. He fell to the ground and then the car ran over him and sped away.

The incident was caught by a dashcam camera in another car. The video went viral on social media.

Floralde was admitted to the intensive care unit and was discharged from the hospital five days later.

He said in an interview with ABS-CBN News that he was happy that Sanvicente finally appeared in public to face the charges against him. 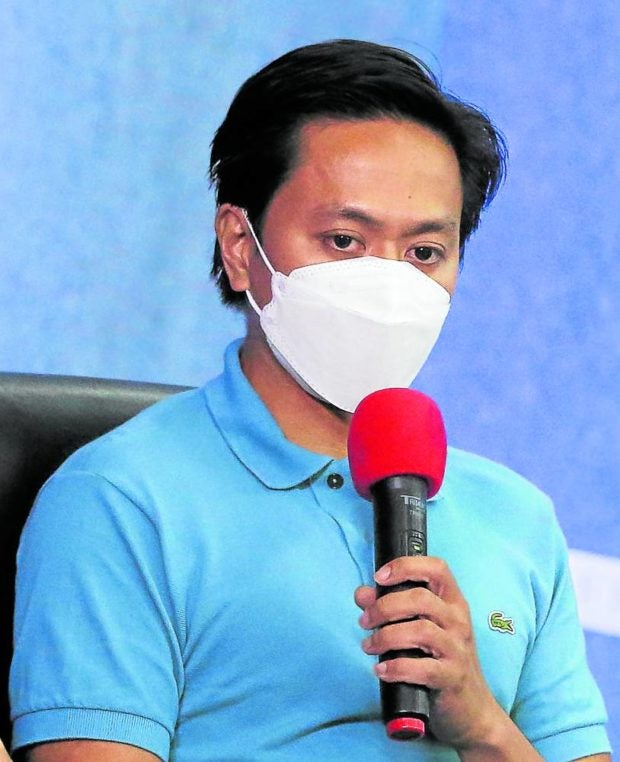 Despite the apology, Floralde said he would still pursue the cases against Sanvicente.

The security guard, however, empathized with the driver, saying that if he were in his shoes, he would also have panicked as a “natural reaction.”

“But when he hit me a second time, that was not right. I was run over by the car,” he said.

Macalino said the Sanvicentes would extend any help to Floralde and his family, and were “not condoning” the incident.

According to Sanvicente’s parents, they went to Camp Crame for fear of their son’s life after a furious Danao on Monday demanded Sanvicente’s surrender.

Macalino said he advised Sanvicente’s family to surface him to “defuse public perception that he is hiding.”

“It will also be our opportunity to interview him on what really happened. You cannot defend a person in his absence. We need to know the truth because the truth will set you free,” he said.

Sanvicente said he could no longer remember what happened, because “I was so confused at that time.”

His lawyer said Sanvicente “panicked” and was “rattled” after the incident, prompting him to hide for more than a week.

In response to Danao’s suspicion that he was an addict, Sanvicente denied he used drugs.

His lawyer had no immediate response to a reporter’s question on whether he would submit to a drug test.

“The charge he is facing is a traffic accident charge. As of now, we are not prepared to give him advice [on a drug test],” Macalino said.

He also refused to disclose any personal information about his client, saying they would answer inquiries at the “proper forum.”

Sanvicente’s father, Joel, dismissed allegations that they opted to show up at the PNP headquarters because they had protectors and connections there.

Sanvicente’s mother was near tears over what happened.

“We cannot eat or sleep anymore. My son’s life will be ruined. No parent wants that. He is a good son, he is a very responsible man,” she said. “This is just an accident. But the story just grew out of proportion. What will happen to my son?”

Sanvicente did not respond to two summonses sent to him by the Land Transportation Office (LTO) and did not appear in two hearings called on his case.

On Monday, the LTO revoked his license and permanently barred him from obtaining a driver’s license.

LTO’s records show that Sanvicente had three previous “reckless driving” citations for which he was apprehended in 2010, 2015, and 2016.