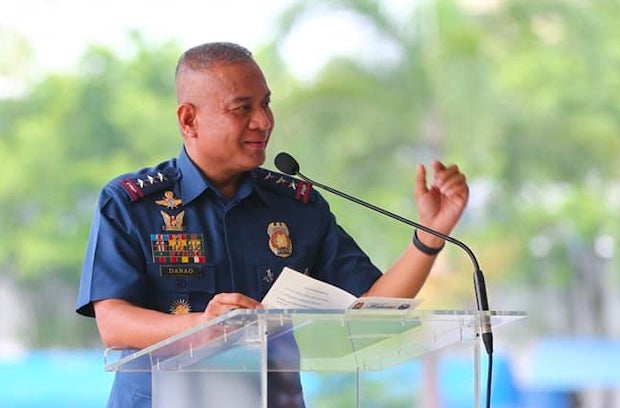 MANILA, Philippines — Rights activists on Wednesday raised concerns over the hostility of the Philippine National Police toward those intending to hold protest rallies at the inauguration of President-elect Ferdinand Marcos Jr. on June 30.

Even Justice Secretary Menardo Guevarra was moved to declare that the PNP could not legally ban anti-Marcos activists from protesting peacefully.

“The right of peaceful assembly, regardless of one’s political beliefs or affiliation, is guaranteed by the Constitution, subject to reasonable regulations to maintain peace and order, including the requirement to obtain a prior permit,” he said in a statement.

Renato Reyes, secretary-general of Bagong Alyansang Makabayan (Bayan), reminded the PNP officer in charge, Lt. Gen. Vicente Danao Jr., that the Bill of Rights “does not discriminate” against any form of public assembly, whether in favor or critical of the government.

“Equal protection under the law demands that those for or opposed to a certain issue are able to freely exercise their rights without discrimination,” Reyes pointed out.

In recent public statements, Danao said some protesters tended to “abuse” their “freedom of expression” and bewailed how activists “keep insisting [on] human rights.”

He claimed that protesters were committing “human wrong,” and announced that they would be allowed to get near the National Museum in Manila, the site of Marcos’ inauguration ceremony, only if they were shouting “Mabuhay” (Long live).

‘Not a police state’

This, in particular, was “disturbing” for Phil Robertson, deputy Asia director of the New York-based Human Rights Watch, as well as Danao’s “threats to violently disperse” the protesters.

“While the police are duty-bound to keep the peace during these activities, this kind of confrontational and aggressive police attitude is uncalled for based on the circumstances of the situation,” Robertson said in a statement.

“The Philippines is not a police state,” he said.

Bayan’s Reyes wondered whether the PNP now had to approve the intended message of any assembly before a permit could be issued.

“What kind of Marcosian throwback to martial law is this?” he said, referring to the martial rule of the President-elect’s father, the late ousted dictator Ferdinand Marcos. “Only those singing praises for Marcos will be allowed to freely exercise their rights?”

According to Cristina Palabay, secretary-general of the rights group Karapatan, nothing in the 1987 Constitution and even in the Marcos-era Batas Pambansa 880 specifies that only assemblies lauding an administration are to be allowed.

“Are the police now in the business of rewriting or distorting these laws that cover such rights?” Palabay said. “Whatever happened to the human rights training of these policemen? Or maybe these training sessions were all just for show?”

Danao’s statements are “simply unacceptable” and can only be made by authorities who “blatantly and brazenly” disregard protesters’ basic rights, Palabay said.

Guevarra said in his statement that as long as the protesters’ “statements do not constitute an actionable offense, such as inciting to sedition or oral defamation, [they] enjoy freedom of expression.”

In an online media forum, the justice secretary called for a stop to the Red-tagging by the National Task Force to End Local Communist Armed Conflict (NTF-Elcac).

He said the accusers should just file criminal complaints against suspected communist rebel fronts if they had evidence.

“But if you don’t have evidence to support anything except to suspect that these are fronts of communist terrorist groups, then don’t say anything anymore because you’re endangering certain people who might become targets when they are just vocal about their own political views,” Guevarra said.

He added: “As far as the [Department of Justice] is concerned, if you have evidence against these groups, file the appropriate complaints. Stop labeling them. Do whatever is necessary to prosecute them.”

A member of the NTF-Elcac, Guevarra said Red-tagging was not a task force policy.

“There are only certain persons associated with the NTF-Elcac who might have been vocal about their impressions about certain groups,” he said.

Danao has also questioned the presence of journalists during the cultivation program last week of Hacienda Tinang farmers in Concepcion, Tarlac. The event was marked by the roundup of a number of persons, including working and campus journalists, and the filing of charges of illegal assembly and malicious mischief against what is now collectively known as “Tinang 83.”

On Monday, Danao asked why journalists were “with those militants” and what their purpose was—a stance that Altermidya, a network of progressive and independent news outfits, described as “unreasonable.”

“Why not?” Altermidya said in a statement on Wednesday. “The media was invited to cover the launching of the farmers’ cultivation program in anticipation of their formal installation as agrarian reform beneficiaries.”

Altermidya said it should have been “apparent” that the journalists present were “covering an activity on land that should have long undergone distribution under the government’s very own Comprehensive Agrarian Reform Program.”

Activist groups have filed a complaint at the Commission on Human Rights stating that the police committed rights violations during the arrest and detention of the Tinang 83.