Cambodian court jails American lawyer, dozens of others for treason 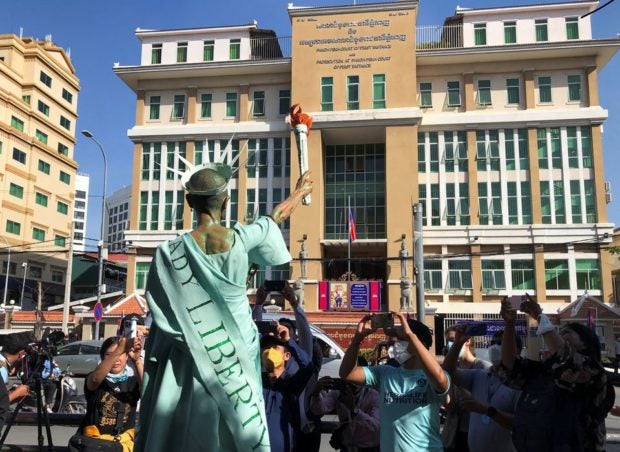 PHONM PENH — A Cambodian court handed down jail sentences on Tuesday to about 60 opposition figures including prominent lawyer Theary Seng for conspiring to commit treason, in a mass trial condemned by the United States and rights groups as politically motivated.

Theary Seng, a Cambodian-American lawyer and human rights activist, was among more than 100 people affiliated with the dissolved Cambodia National Rescue Party (CNRP) charged with treason and incitement.

The court in Phnom Penh sentenced Theary Seng to six years in jail and ordered her arrest, her lawyer told reporters.

“This is not acceptable and I will meet her in prison to discuss appealing,” the lawyer Chuong Choungy said outside the court, noting she was among about 60 co-defendants who had been sentenced to between five to eight years in prison.

Theary Seng had arrived at court dressed as the Statue of Liberty with a symbolic chain around her, and saying she expected to be found guilty.

The verdicts are likely to renew international concern about Cambodia’s veteran prime minister, Hun Sen, and what his critics say has been elimination, over many years, of opposition to his rule. Hun Sen denies persecuting his opponents. 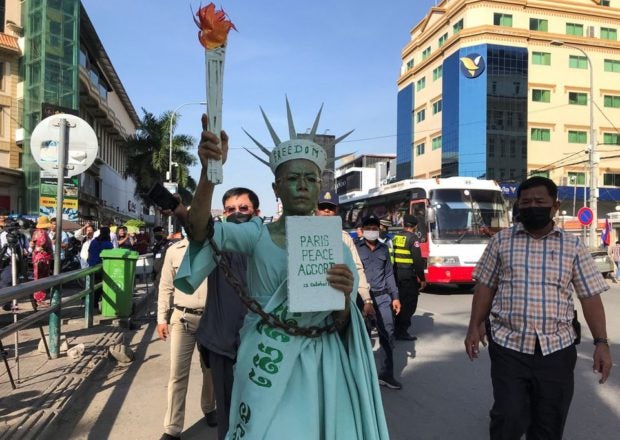 “The United States has consistently called on Cambodian authorities to stop politically motivated trials, including against U.S. citizen Seng Theary and other human rights defenders, members of the political opposition, journalists, and labour and environmental activists,” Roedemeier told Reuters.

The court sentenced veteran opposition leader Sam Rainsy, a former finance minister and leader of the CNRP who lives in exile in France, in absentia to eight years in prison.

Before her arrest, Theary Seng spoke of the verdict she expected, saying it would apply to all Cambodians who “love justice, who love freedom, who are genuine democrats”.

“It follows the logic of this autocratic regime to find me guilty,” she told reporters. 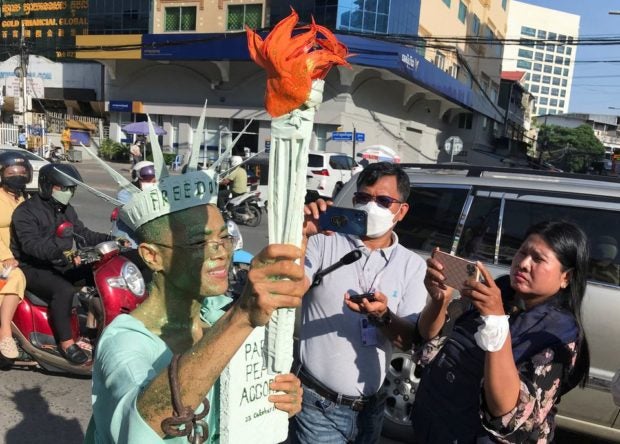 Hun Sen has ruled Cambodia for 37 years. He rose to prominence in the 1980s, after the defeat of the Khmer Rouge “killing fields” regime, and cemented his hold on power in the 1990s.

The CNRP was banned and its leader Kem Sokha arrested before a 2018 general election, allowing Hun Sen’s Cambodian People’s Party to win every parliamentary seat, and prompting international outrage.

Human Rights Watch urged foreign governments, the United Nations, and aid donors to press Cambodia to quash the convictions and end a broad attack on the country’s remaining civic and democratic space.

A leader seeks to stay in power

Hun Sen plays hardball to keep his grip on Cambodia

Cambodia PM calls on Trump to warn diplomats about interference