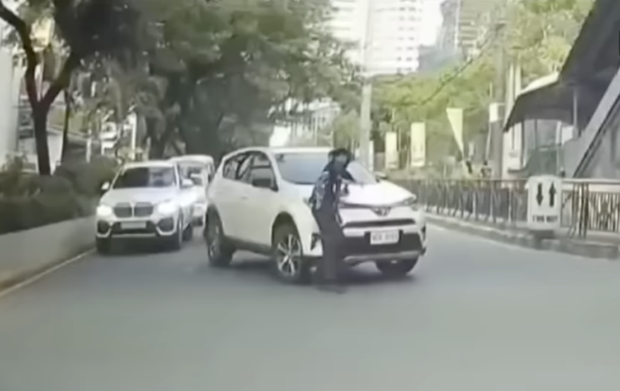 MANILA, Philippines — The Philippine National Police (PNP) on Wednesday admitted having “no proof” that Jose Antonio Sanvicente, owner of the sport utility vehicle (SUV) that ran over a security guard in Mandaluyong, was driving the car during the incident.

However, the hit-and-run suspect has to show proof that he wasn’t the one driving the car that ran over Christian Joseph Floralde, who was directing traffic at the intersection of Julia Vargas Avenue and St. Francis Street last June 5.

“We have no proof that Mr. Sanvicente was the one driving the car, but we also have this registered owner rule,” PNP spokesperson Police Col. Jean Fajardo said over ABS-CBN News Channel’s Rundown.

Fajardo was referring to a legal principle of holding accountable the “registered owner of a vehicle whose operation causes injury to another.”

She said that while there is a presumption that Sanvicente was driving the SUV during the incident, it may be disproved “if the registered owner can present evidence that the vehicle involved in the case has been transferred to another person or there is someone driving other than him.”

Last June 5, Sanvicente’s white SUV with the plate number NCO 3781 was seen running over Floralde, a video of which has since gone viral on social media, and is now the key evidence against him by police.

Complaints of frustrated murder and abandonment of one’s victim have been filed against Sanvicente, and is currently under preliminary investigation.

The Land Transportation Office has also revoked his license after he failed to show up for two hearings that summoned him to explain the hit-and-run incident to the agency.

He was also “perpetually disqualified” from getting another driver’s license and driving a motor vehicle.

The Department of Justice (DOJ) Secretary Menardo Guevarra on Tuesday placed Sanvicente under the government’s Immigration Lookout Bulletin Order, which enjoins the Bureau of Immigration to monitor and inform authorities should the subject attempt to leave the country.

The order, however, does not legally bar him from departing the Philippines, according to the DOJ.