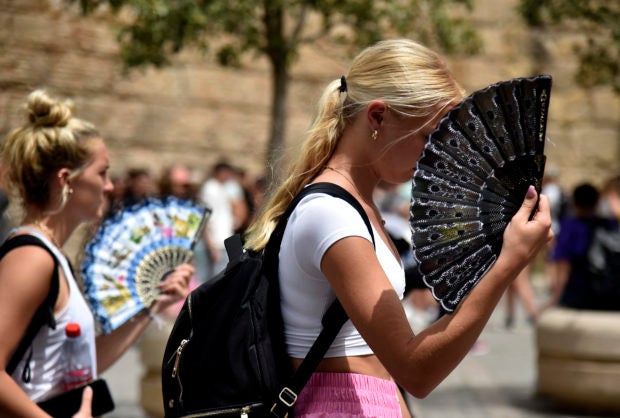 Two women use fans to fight the scorching heat during a heatwave in Seville on June 13, 2022. AFP

MADRID—Spain was on Monday in the grips of a heatwave expected to reach “extreme” levels with France set to follow suit as meteorologists blame the unusually high seasonal temperatures on global warming.

The “unusual” temperatures in the first-half of June come after Spain experienced its hottest May in at least 100 years, Ruben del Campo, spokesman for the Spanish Meteorological Agency (Aemet) said.

He told AFP that the current heatwave would bring “extreme temperatures” and “could last until the end of the week”.

Temperatures are forecast to rise above 40 degrees Celsius (around 104 degrees Fahrenheit) in the center and south of the country on Monday, and even climb as high as 43 degrees in the southern Andalusia region, especially in the cities of Cordoba or Seville, according to Aemet.

The heatwave is also set to spread elsewhere in Europe, such as France, in the next few days, del Campo warned.

France’s weather service said the heatwave would hit southern regions from late Tuesday, worsening a drought across much of the country that is threatening farm harvests.

From Wednesday, much of France will swelter in temperatures that could reach 38 or even 40C — “extremely early” for the season — forecaster Frederic Nathan of Meteo-France told AFP.

Water use restrictions are already in place in around a third of France — and utilities are urging farmers, factories and public service providers to show “restraint” in their water use.

In Portugal, hot weather began last Friday, prompting the civil protection authority to raise the alert level over the risks of forest fires.

Portugal was among several European nations to have faced fierce fires last summer, which climate scientists warn will become increasingly common due to manmade global warming.

In 2017, fires killed dozens of people in Portugal.

Recent science has shown beyond any doubt that climate change has already increased the frequency and intensity of heatwaves, and that worse is on the horizon no matter how quickly humanity draws down carbon pollution.

The decade from 2011 to 2020 was the warmest on record, and the last six years the hottest ever registered.

Spain has experienced four episodes of extreme temperatures in the last 10 months.

A heatwave last August set a new record, with the temperature hitting 47.4 degrees C in the southern city of Montoro.

“This extreme heat is not normal at this time during the spring,” del Campo said, attributing it to global warming.

Not only have temperatures become more extreme, he said, but periods of heat have become more frequent.

Summers in Spain, he added, “are a bit hotter every year and getting longer and longer. A summer lasts one month longer than in the 1980s.”

Apart from the consequences on human health, he warned of the environmental impact, with a high risk of drought and water supply problems, and more fires.

In September, a huge wildfire raged for seven days in the Sierra Bermeja area, killing a firefighter and forcing 2,600 people from their homes as it burned through some 10,000 hectares (24,700 acres) of land.

Turkey, meanwhile, braced for strong rains, wind and flash floods in the north and centre of the country on Monday, after a weekend of flooding left five people dead, authorities said on Monday.

Greece, too, saw widespread flooding at the weekend.