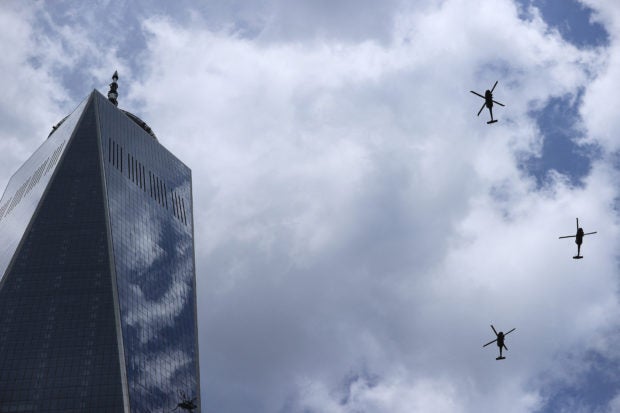 NEW YORK—After a period of blissful silence overhead due to the Covid-19 pandemic, New Yorkers are dealing again with a familiar problem: noisy helicopters.

“They pollute our air, creating noise pollution which has negative health impacts,” the 56-year-old told AFP.

New York regularly hums with the whirr of helicopters circling the skies as tourists eye the city from above during short, pricey, sightseeing tours.

They also transport wealthy residents keen to avoid traffic jams on their way to holiday homes by the beach in the plush Hamptons.

Elstein is far from the only New Yorker unhappy at the near-constant din caused by the tens of thousands of flights every year.

Some respite may be in the offing.

Earlier this month, the New York state legislature approved a bill that could see companies fined $10,000 a day for generating “unreasonable” noise levels.

If Governor Kathy Hochul signs it into law, it would be the first piece of state legislation to tackle noise pollution from the helicopters.

Senator Brad Hoylman, who sponsored the bill, said that “many New Yorkers can no longer work from home comfortably, enjoy a walk along the waterfront, or keep a napping child asleep because of the incessant noise and vibrations from non-essential helicopter use.”

He noted that one helicopter produces 43 times more carbon dioxide per hour than an average car.

“Helicopter noise is not just annoying, it’s detrimental to our health and our environment,” Hoylman said in a statement.

For Andy Rosenthal — president of Stop the Chop, an organization of volunteers seeking to ban non-essential helicopter flights — the legislation does not go far enough.

“It’s a good first step. (But) it is not what we had hoped for. The fight continues,” he said.

New York City has three active heliports: two in Midtown on the Hudson and East rivers, used for corporate and chartered flights, and another near Wall Street in lower Manhattan, from which tourist flights depart.

Amid complaints, the administration of then-mayor Bill de Blasio agreed with the industry to reduce the number of tourist flights per year from 60,000 to 30,000, starting in 2017.

They also restricted tourist rides departing New York City to airspace over the rivers surrounding Manhattan, banning them from soaring above land.

Sightseeing helicopters taking off from New Jersey are allowed to fly above Manhattan though, including Central Park.

“This is an industry that doesn’t have to exist, shouldn’t exist. (Just) for the convenience of the very few,” said Elstein.

Some residents, though, have become used to the sound and accept it as a fact of living in America’s bustling financial, cultural and tourism capital.

“It’s a background noise,” said Mark Roberge, who lives near the heliport at the southern tip of Manhattan.

“It seems to be part of the experience.”

How much will Uber helicopter cost you?