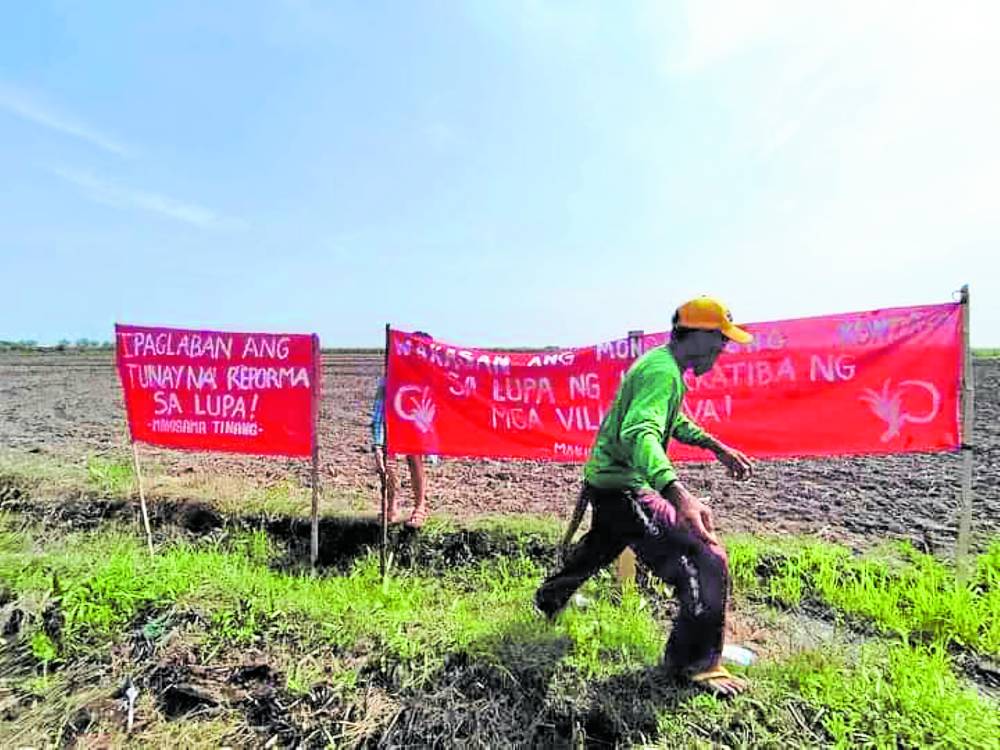 URGENT CALL Streamers put up by members of the farmers’ group Makisama Tinang in a disputed property in Concepcion, Tarlac, call on authorities to recognize their rights and implement a genuine agrarian reform. —PHOTO COURTESY OF TARLAC PROVINCIAL POLICE OFFICE

CITY OF SAN FERNANDO—At least 83 of the 91 agrarian reform beneficiaries (ARBs) and peasant advocates taken by the police and detained in Concepcion town, Tarlac province, on Thursday would face charges after a cooperative backed out of a compromise agreement to settle the destruction of sugarcane planted in the disputed land.

Foreigners had ‘no idea’

Montefalco-Ikeshita said the eight had joined the group “without any idea of what’s going to happen, as they were mere tourists and bonafide observers.”

She ordered the Concepcion police to release the eight arrested persons from custody.

The provincial prosecutor said there was probable cause to hold the 83 other accused for the crime of illegal assembly and malicious mischief. She said P120,000 worth of crops had been damaged due to the “malicious destruction of the plants.”

At 4 p.m. on Friday, leaders of the Tinang Samahang Nayon Multi-Purpose Cooperative (TSNMPC) informed Acting Provincial Prosecutor Mila Montefalco of their plan to withdraw from a settlement, according to lawyer Joebert Pahilga, the counsel sent by the National Union of Peoples’ Lawyers (NUPL) and agrarian center Sentra to represent the farmers.

In that deal, the TSNMPC demanded P200,000 as compensation for the sugarcanes that were supposedly damaged by Makisama Tinang (MT) members in a “bungkalan” (cooperative planting) on Thursday.

The MT members and their supporters were clearing a portion of a 200-hectare property in Barangay Tinang when they were apprehended by policemen.

In 1998, the land was obtained by 246 ARBs through a Certificate of Land Ownership Award (Cloa) issued by the Department of Agrarian Reform (DAR) to them. The Dominican friars gave up the land in support of the government’s agrarian reform.

The DAR reevaluated the ARBs in May after the TSNMPC, which claimed right over the land, sought to annul the Cloa.

Mayor-elect Noel Villanueva and his relatives are majority owners of TSNMPC, according to Securities and Exchange Commission documents submitted to the DAR.

BailAs the deal on the release of the 91 arrested ARBs and their supporters fell through, they would have to pay P36,000 each as bail to regain their freedom, NUPL lawyer Jo Clemente said in a phone interview.

TSNMPC did not drop the complaints for destruction of property, malicious mischief and obstruction of justice.

Lawyers for the TSNMPC did not say why the cooperative’s leaders backed out of the settlement.

The arrests were made just a day before the 34th anniversary of the enactment of Republic Act No. 6657, or the law that implemented the Comprehensive Agrarian Reform Agreement starting in 1988.

He said those facing charges of malicious mischief and illegal assembly aside from the farmers and the foreigners were some 30 students from different universities in Central Luzon, Baguio City and Manila.

Denisse Macalino, one of the detained students, failed to attend their graduation rites at Holy Angel University in Angeles City, Pampanga province.

In a video posted by alternative news organization AlterMidya, Macalino, a campus journalist, said she was hoping she would be released from jail soon, along with the 90 others.

Also charged were nine researchers for master’s and doctoral degrees, and 40 members of farmers’ groups “who refused to divulge their identities.”