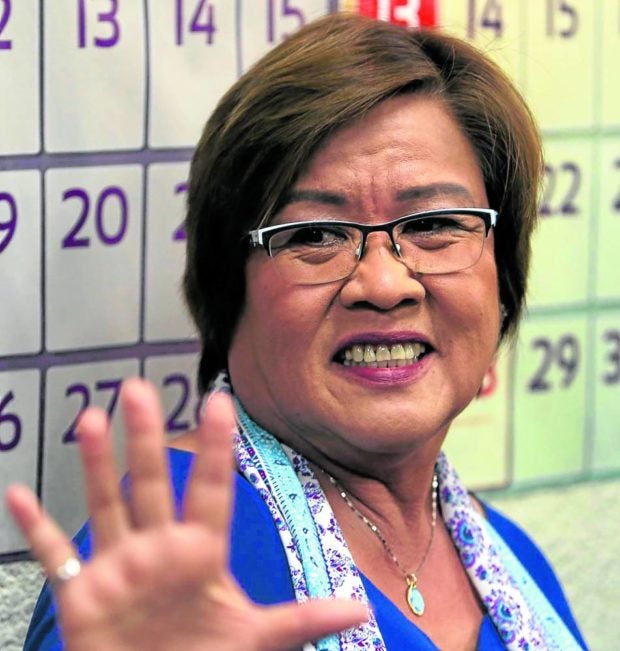 MANILA, Philippines — The opposition people’s campaign and the developments on the drug-related cases against her were discussed when Vice President Leni Robredo visited her, Senator Leila de Lima said on Friday.

In a hand written statement sent by her office, De Lima — currently detained at the Philippine National Police (PNP) Custodial Center in Camp Crame — said that she was extremely delighted with Robredo’s visit.

“Extremely delighted by VP Leni’s visit today here in the PNP Custodial Center. We had a marvelous time sharing stories and insights,” the outgoing senator said.

“We talked about the very inspiring people’s campaign of Team #LeniKiko, Jillian’s graduation and her recent US trip with her daughters, and the upcoming launching of the Angat Buhay NGO. We also touched on the recent positive developments in my cases,” she added.

According to De Lima, there was no hint of ill feelings within Robredo even as both of them failed to land elective posts in the 2022 national elections.

De Lima sought a second term in the Senate, running under the banner of Robredo and fellow Senator Francis Pangilinan, who ran for president and vice president, respectively, in the recent polls.

(It is really heartening to talk to VP Leni.  There was no trace of any ill feelings, but only strength, resolve, and courage.  A friend and a fellow public servant who did not forget me, stood by me, and without thinking twice or hesitation, offered herself for Filipinos and the Philippines.)

“I wish her all the very best.  Muli, maraming salamat (Again, thank you so much), VP Leni!” she added.

In the senatorial race where 12 senators were picked for the 19th Congress, De Lima was ranked 23rd according to the partial and unofficial tally, getting 7.222 million votes.  Out of the Robredo-Pangilinan tandem’s core senatorial slate, only Senator Risa Hontiveros managed to land a seat, placing 11th with 15.26 million votes.

Two more of the Robredo-Pangilinan tandem’s guest candidates in Sorsogon Governor Francis Escudero and Senator Joel Villanueva also made it to the Magic 12.

Regarding her drug-related cases, De Lima said her camp started to see good developments in their favor as several of the government’s witnesses have recanted their testimonies, with both convicted drug lord Kerwin Espinosa and former Bureau of Corrections officer-in-charge Rafael Ragos claimed that they were only pressured to testify agains the senator.

De Lima’s lawyers said they hope more “coerced” witnesses would come out to recant their statements.

READ: De Lima’s counsel hopes other ‘coerced witnesses’ will ‘come out and confess’