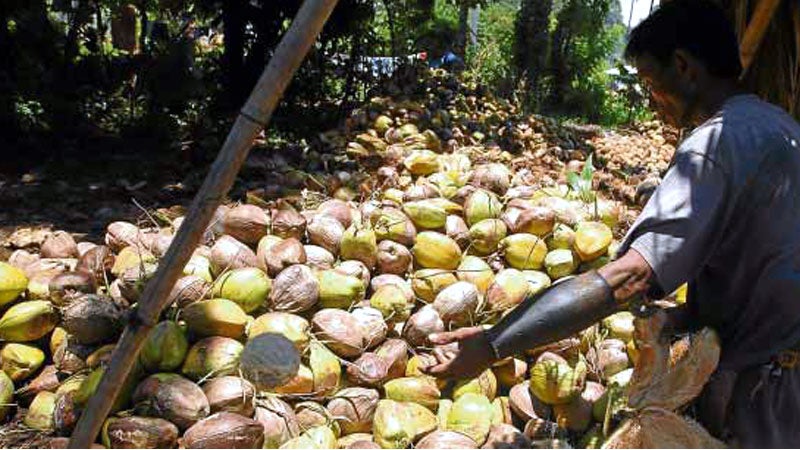 The government will formally launch within this month the blueprint designed to revitalize the Philippine coconut industry, an official said on Thursday.

This is in line with Executive Order No. 172, or the Coconut Farmers and Industry Development Plan (CFIDP), which was signed by President Duterte recently, to set the direction for the coconut industry’s rehabilitation, modernization and industrialization while improving the livelihood and productivity of 2.5 million coconut farmers using the controversial P75-billion coco levy fund.

The road map, which details the sector’s current situation and outlines the various interventions needed to modernize, industrialize and be globally competitive, including government funding support, will be implemented by the Philippine Coconut Authority (PCA) and other concerned government agencies.

“We’re doing a launch within the month but, of course, the actual implementation will be done [when] the new administration comes in,” PCA Administrator Benjamin Madrigal Jr. told the Inquirer in a text message.

Madrigal said the plan was drafted in 2021 with the help of experts from the University of the Philippines Los Baños.

“We conducted [a] harmonization workshop with the [different government] agencies to ensure uniform understanding of implementation, monitoring and reporting requirements which will be contained in the operations manual for the plan,” Madrigal added.

Madrigal said the coco levy fund would be released by the Trust Fund Management Committee, which is headed by the Department of Finance (DOF), immediately upon the submission of the necessary documents.

“Funds will be released directly to the implementing agencies upon submission of required budget forms and the Bureau of the Treasury already provided a certification of availability of funds for Year 1 [amounting to P5 billion],” he noted. Another P10 billion will be disbursed to the fund on the second year, P15 billion each on the third and fourth year, and P25 billion and any other amount accruing, including interest, on the fifth year.

The DOF earlier said that a recent Commission on Audit report pegged the value of coco levy assets at P111.3 billion.

The CFIDP will be reviewed annually to ensure its effective implementation, taking into consideration the absorptive capacity and performance of implementing agencies, as well as the outputs and outcomes of programs based on key performance indicators, according to EO 172. It will specifically implement national programs for social protection of coconut farmers, farm workers, and their families; farmers’ organization and development; innovative research projects and their practical application; community-based enterprises and integrated processing of coconut and downstream products.

The signing of EO 172, however, was met with a mix of skepticism and guarded jubilation by coconut farmers.

“Of course, we welcome the executive order. But our jubilation is also being doused by skepticism,” Rene Cerilla, 57, son of a coconut farmer in Lopez town in Quezon province who is also legal and policy advocacy development officer of Pambansang Kilusan ng mga Samahang Magsasaka, said in a phone interview on Thursday.

He added: “Honestly, we’re not sure if the legions of small coconut farmers will benefit from that executive order.”

Danny Carranza, secretary general of the national farmers’ group Kilusan Para sa Tunay na Repormang Agraryo at Katarungang Panlipunan, said the issuance of EO 172 “is a bit too late, but at least the long wait is over.”

In a statement, Carranza made it clear that the implementation of the CFIDP “should be fair, transparent and participatory.”

Cerilla noted that the government has set a guideline that the coco levy fund benefits would be provided only to “organized coconut farmers group[s].”

“How about the majority of unorganized farmers? They have long been waiting for the benefits. Now, will they just be cast aside in the sideline?” he lamented.

According to Carranza, less than 5 percent of the estimated 2.5 million coconut farmers across the country who should benefit from the coco levy fund were organized.

“We hope that organizing and capacity building of small coconut farmers will be a serious concern of various government agencies,” Carranza said.

Cerilla also noted that there were also sets of criteria that have to be met by the applicant farmers’ group before they could qualify for benefits under the CFIDP.

“The conditions are heavily lopsided against the small coconut farmers but favorable to a selected few,” he lamented.

He claimed that there were already favored groups of farmers that had already been “listed as beneficiaries” even before the issuance of EO 172.

“We hope the agencies trusted with implementing [the law] will bear in mind that the recovered coconut levy was the fruit of decades of struggle for justice for small coconut farmers who had to go on long marches and sustained mobilization in the years past to make the recovery effort successful,” Carranza emphasized.