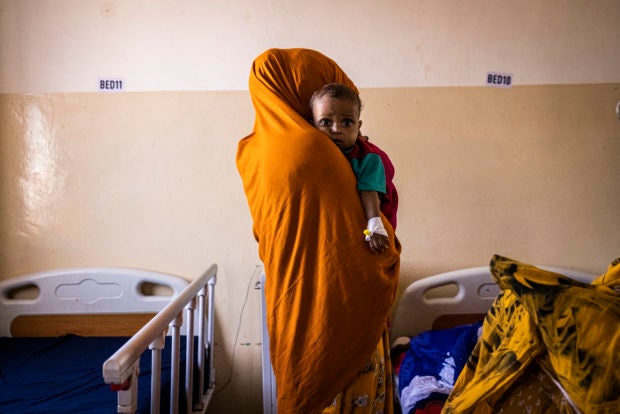 A mother holds her malnourished baby in Banadir Maternity and Children Hospital in Mogadishu, Somalia, on June 1, 2022. AFP

MOGADISHU, Somalia—Arbay Mahad Qasim has already lost two children to a vicious drought, and now the Somali villager fears she could lose a third as her malnourished toddler Ifrah awaits treatment in a Mogadishu hospital.

Barely out of her teens, Qasim is among dozens of weary parents crowding Banadir Maternity & Children Hospital, which has become ground zero for the starvation crisis sweeping across Somalia as a record drought grips the Horn of Africa.

Entire villages have been forced to uproot their lives and flee their homes after poor rainfall destroyed crops and killed livestock.

When the rains failed for a fourth consecutive season last month, UN aid agencies and meteorologists warned that a famine was looming in Somalia, Kenya and Ethiopia.

But for many Somalis like Qasim, who has been surviving on government handouts for the past few months, catastrophe has already struck.

Two of her children died of hunger in the last 18 months.

When two-year-old Ifrah’s tiny body began to swell, showing symptoms of severe malnutrition, Qasim wasted no time, spending a day travelling to Mogadishu from her village in the southwest in a desperate bid to save her youngest child’s life.

The Banadir facility is packed with parents fearing the worst for their children.

Some have walked for days to find help, carrying their sick, skeletal toddlers on their backs.

Many told AFP they had never endured a crisis of such terrifying magnitude, echoing the warnings of climate scientists who say the unprecedented drought is the worst seen in four decades.

“The crops failed. We lost the livestock. The river dried up,” said Khadija Mohamed Hassan, whose 14-month-old son Bilal is among those admitted to the Banadir facility.

“I am 45 years old and I have never seen such a devastating drought ever in my life. We are living in the worst conditions of our time,” she told AFP.

Health workers are already overwhelmed, with doctor Hafsa Mohamed Hassan telling AFP that the number of patients arriving at Banadir’s stabilisation centre for malnutrition had trebled since the drought began, leading to a shortage of beds on some days.

“The cases we are receiving include children with other health complications like acute measles and others who are in a coma due to severe malnutrition,” she said.

The situation is at a tipping point, said Bishar Osman Hussein of the non-profit organisation Concern Worldwide, which has been supporting the Banadir centre since 2017.

“Between January and June this year, the number of children admitted at the Banadir Hospital stabilisation centre with severe malnutrition and other complications has increased from 120 to 230 per month,” he told AFP.

Meteorologists have warned that the October-November monsoon could also fail, plunging the region into further turmoil.

Conflict-wracked Somalia is particularly ill-equipped to cope with the crisis, with a grinding Islamist insurgency limiting humanitarian access to parts of the country.

Thousands of miles away, the war in Ukraine has also had a devastating impact on the lives of Somalis, with food prices soaring and aid in short supply.

Some 7.1 million Somalis — nearly half the population — are battling hunger, with more than 200,000 on the brink of starvation, the UN said this week.

Meanwhile appeals for aid have largely gone unnoticed, with agencies raising less than 20 percent of the funds needed to prevent a repeat of the 2011 famine that killed 260,000 people — half of them children under the age of six.

“We cannot wait for a declaration of famine to act,” El-Khidir Daloum, the World Food Programme’s country director in Somalia, said in a statement Monday, warning of a race against time.

“Anyone with a plate of food in their table today must think about the child who is crying somewhere because of hunger and help them in any way possible,” he said during a recent visit to a camp housing drought-displaced communities.

Back at Banadir hospital, Khadija Mohamed Hassan anxiously keeps vigil over little Bilal, his bony body a mess of tubes and bandages.

“We have been here for 13 days, and he looks better now,” she said.

‘We had to flee’: Somalia on the run from extreme climate

UN: 2 million Somalis could die of starvation amid drought

Starvation looms as food runs out in drought-hit Ethiopia