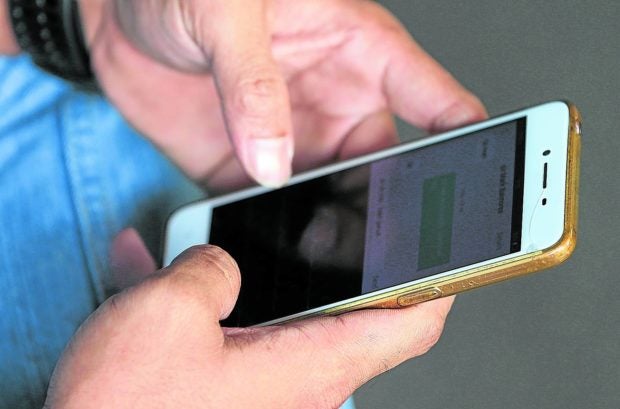 MANILA, Philippines — Senator Grace Poe on Thursday called on concerned government agencies and telecommunication firms to beef up their efforts to put a stop to text scams which continue to victimize Filipino phone users.

“The unabated surge of text scams has brought further hardship and distress on our people who are already mired in debts. This must stop,” Poe, chairperson of the Senate public services committee, said in a statement.

Poe urged the Department of Information and Communications Technology and the National Telecommunications Commission (NTC) to ramp up their crackdown against text scams.

Poe said she herself has received a number of unwanted texts from prepaid mobile phone numbers promising jobs, extra income, incentives and freebies.

“As more rely on digital technology to cope with the hard times, so must we intensify all necessary safeguards against heightened risks that can overturn our people’s efforts at recovery,” she stressed.

Poe also lamented that despite the NTC’s earlier directive to major telcos to warn subscribers against fake jobs, such text messages have persisted with “new gimmicks to bait and deceive mobile phone users.”

(We should not let these text scammers continue to prey on Filipinos who are still struggling with the impact of the pandemic and the rising prices of oil and goods.)

“To most, the mobile phone is their only means to survive, and it shouldn’t at all be compromised,” she added.

The senator likewise urged the incoming 19th Congress to take up the SIM card registration bill to help institutionalize protection for millions of mobile phone users in the country.

The 18th Congress earlier passed a SIM card registration bill, which was sponsored by Poe in the Senate. The measure, however, was vetoed by outgoing President Rodrigo Duterte over a social media provision.

“The whole of government must ensconce a safer and more secure digital and mobile phone use in the country to protect our people from falling deeper into poverty and helplessness,” Poe went on.

Read Next
US asks if China, Russia favor their ties over world security with North Korea vetoes
EDITORS' PICK
Do all the things you do, faster
Motorcycles, smartphones, and cash prizes up for grabs in TNT’s ‘Tuloy Ang Saya’ Raffle in Mindanao
House energy committee chair Arroyo bats for cheap electricity
NCR at increased COVID risk again
New PS-DBM director says DepEd laptop MOA ‘not legal’
House okays budget; ways to go in Senate
MOST READ
Robredo’s tarpaulin portrait at Palace just a ‘placeholder’
Shopee PH gets flak for getting Toni Gonzaga
Robredo supporter tackles elephant in room: No massive fraud in 2022 polls, surveys were just right
DepEd: We are in a crisis situation in education sector
Don't miss out on the latest news and information.