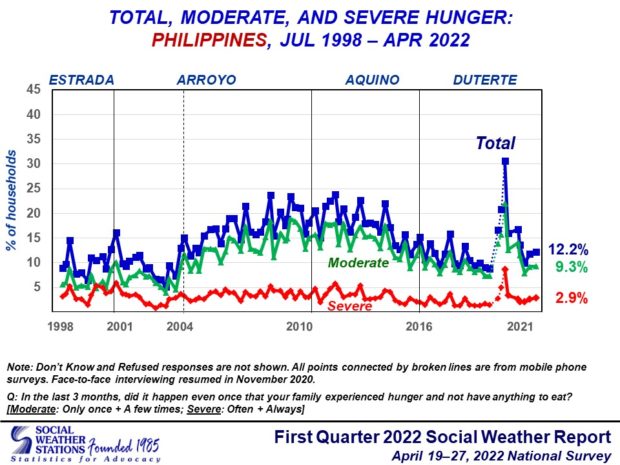 MANILA, Philippines — A total of 12.2% of Filipinos, or an estimated 3.1 million families, experienced hunger in the first quarter of 2022, according to a survey conducted by the Social Weather Stations from April 9 to 27.

However, the higher hunger incidence in the country was due to the increases in Balance Luzon and Mindanao, while the rate decreased in Metro Manila and the Visayas region.

SWS said the noncommissioned survey was conducted among 1,440 total adults, using face-to-face interviews, with sampling error margins of ±2.6 percent for national percentages and ±5.2 percent for Balance Luzon, Metro Manila, the Visayas, and Mindanao.

Charting the cycle of hunger in PH: It’s always there

Hunger of Filipino families due to Duterte’s policies, groups say

UN: Pandemic could push tens of millions into chronic hunger

Read Next
Oil firms implement a hefty hike in fuel prices
EDITORS' PICK
Heads may roll at BOC, says Palace if sugar smugglers are allowed to use recycled import permits
What to watch out for when selecting a video surveillance solution
Apple warns of flaw that lets hackers into iPhones, Macs
House energy committee chair Arroyo bats for cheap electricity
46% of schools nationwide to have full face-to-face classes on Aug. 22
vivo brings to the Philippines a powerful smartphone with a slimmer body, the vivo Y02s for only PHP 6,499
MOST READ
DepEd to give teachers P5K cash allowance within first week of classes
LOOK: Miel Pangilinan dazzles in glittery pre-debut shoot
DOJ indicts bank officer in $2.1 billion Wirecard fiasco
PH importing sugar after all: Marcos okays 150,000 MT
Don't miss out on the latest news and information.