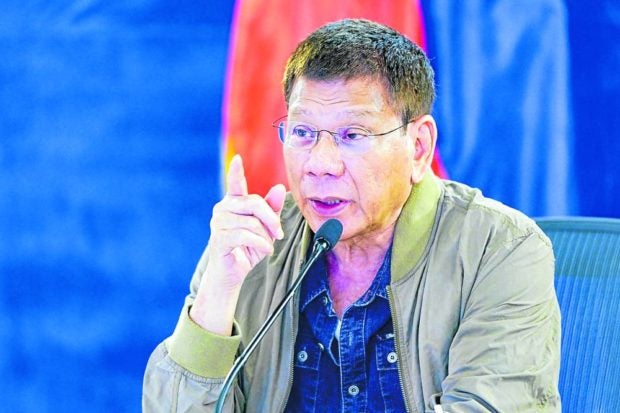 MANILA, Philippines — A few weeks before he steps down, President Rodrigo Duterte called on Filipinos to stop quarreling over politics and just rally behind or support the incoming administration of President-elect Ferdinand “Bongbong” Marcos Jr.

“I hope that everybody would come to terms with the reality that we have a new government and I urge kayong (all) Filipinos to rally behind and support the new leaders. We want the next admin successful,” he said in his taped public address aired on Monday night.

Duterte noted that the Philippines must be “united in confronting the issues” surrounding the country and there is “no room for politicking or actions that are divisive to the country.”

(The people have spoken, we have our new leaders. What I do not want is that there would be some people who would do politicking or just plain criticizing the new administration.)

“President-elect Marcos would need the cooperation and help of everybody. We must give it to him. That’s democracy. That is how we operate,” Duterte added.

He proceeded to urge Filipinos to follow the will of the people that elected Marcos into power, advising the public to avoid politics.

(All of my friends who supported me will rally behind the elected leaders of the country. That is the way this country is governed.)

Duterte added that his administration was “both ready and eager to hand over the reins of government” to the incoming administration, assuring that it would be a “smooth and peaceful” transition “as we want the next administration to succeed for the benefit of the country.”

“I urge my fellow Filipinos to rally behind and support our new leaders so that they can build on the gains we have achieved in the past six years,” he said.

“Various challenges, both natural and man-made, also continue to test our resolve as a nation and a people. Let us continue to unite and show compassion with one another so we may overcome all of these challenges,” the President added.

He said the incoming Marcos administration needs “all the support and solidarity” so they should be given “goodwill and our best wishes as they endeavor to lead our country towards a better future.”

Duterte is set to end his term by noon on June 30, the same day that Marcos will assume the presidency.

In 2021, Duterte had been critical of Marcos, calling the then-presidential aspirant a “weak leader” and a “spoiled child.”

He had also expressed dismay about his daughter’s decision to slide down and run for vice president – instead of running for president – in favor of Marcos despite her strong showing in the presidential surveys.

But in the days before the May 9 elections, Duterte changed his tune, saying that Marcos lived a “simple” life.

He also made a false statement that the government had found no ill-gotten wealth linked to the Marcos family.