ARTA officials appeal suspension: We do not approve telco applications 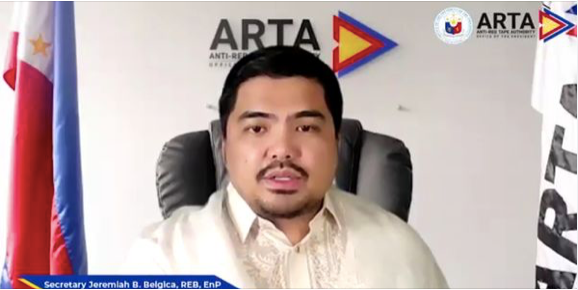 MANILA, Philippines — Officials of the Anti-Red Tape Authority (ARTA) have appealed the preventive suspension order handed down by the Office of the Ombudsman, asserting they are not involved in approving contracts of telecommunication companies.

After filing their counter-affidavit and appeal on Monday, ARTA Director-General Jeremiah Belgica read a statement opposing the complaints lodged against them by a telecommunications firm that claimed the officials gave preferential treatment to a New Major Player (NMP).

According to the complainants, Belgica and four other officials allegedly favored and provided special treatment to the NMP during the selection process conducted by the National Telecommunications Commission (NTC).

But despite being granted the following requirements, the NTC failed to provide frequencies to NOWTel, prompting the company to seek ARTA’s help. After ARTA released the Order of Automatic Approval, another telecommunications company in DITO Telecommunity filed a case before the Office of the Ombudsman.

“Thus, constrained with a predicament of having legislative franchise and provisional authority but with no usable frequency, on May 30, 2020, NOWTel filed a Formal Complaint with ARTA citing the provisions of Sec. 10 of R.A. No. 11032 or the Automatic Approval of Permit, License, Clearance or Certification,” Belgica explained.

“However, while the case was pending with ARTA, on September 2020, NTC suddenly approved the Provisional Authority of NOWTel, but still with no appropriate usable CMTS frequencies which were part of the original application,” he added.

Belgica stressed ARTA’s mandate is only within examining if the requirements of a company or an entity doing business with the government have been complied with and why the transactions have not been approved.

The ARTA officials claimed they were also uncertain how such a suspension will be implemented since they are co-terminus with President Rodrigo Duterte, who will end his term on June 30.

But the Ombudsman said in a transmittal letter to Executive Secretary Salvador Medialdea that the six-month suspension should be converted to a fine amounting to “the respondent’s salary for a number of months corresponding to the period of suspension” if the concerned officials could no longer serve the suspension.

In the same June 3-letter, the Ombudsman added that the refusal or failure of any officer to comply with the order should be ground for disciplinary action.