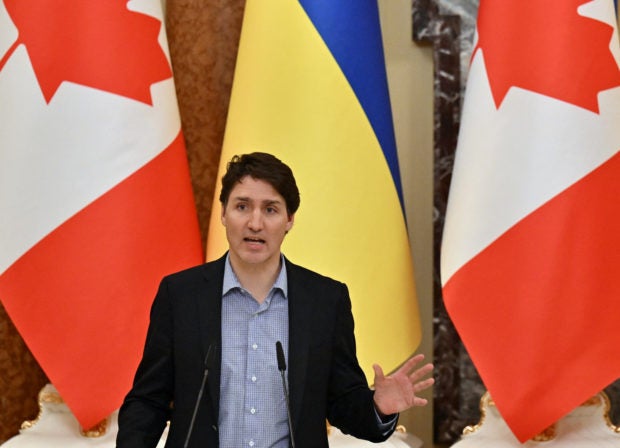 In this file photo taken on May 08, 2022 Canada’s Prime Minister Justin Trudeau gestures during a joint press conference with Ukrainian President Volodymyr Zelensky in Kyiv amid the Russian invasion of Ukraine.   Trudeau announced May 30, 2022 a proposed freeze on handgun ownership in Canada that would effectively ban their importation and sale, following recent mass shootings in the United States. The bill must still be passed by Parliament, with the ruling Liberals holding only a minority of seats. (AFP)

OTTAWA, Canada – Aman Sandhu checked store after store for a handgun in Canada’s British Columbia, hoping to make a purchase before a freeze on sales takes effect, but struggled to find one in stock.

“I’m concerned that if I don’t buy one now, I may never have the choice again,” Sandhu, a member of the Dawson Creek Sportsman’s Club, told AFP.

Prime Minister Justin Trudeau’s proposed freeze on pistol sales — which he announced in the wake of a series of high-profile mass shootings in the United States — has pushed some Canadians to rush out to gun stores while they still can.

While Sandhu is keen to buy a pistol, he is also wary of becoming mired in new rules that include hefty penalties for even minor lapses.

“Jeez, if I slip up, I could screw up the rest of my firearms ownership,” he said, describing a handful of long guns in his collection.

Several gun stores in British Columbia province saw lines out the door within hours of the liberal leader’s declaration on Monday. Other shops across Canada said they sold out within days.

“Sales have been brisk,” said Jen Lavigne, co-owner of That Hunting Store in a strip mall on the outskirts of the capital Ottawa, nestled between a barbershop, a Chinese buffet restaurant, and a conservative lawmaker’s constituency office.

“We sold 100 handguns, or almost our entire stock, in the last three days, since the prime minister announced the freeze,” she said, showing off her nearly empty handgun cabinet.

At DoubleTap Sports in Toronto, a similar scene unfolded. Owner Josko Kovic said the government announcement “created a panic, and people are now rushing out to buy handguns.”

“Almost all stores are sold out, including me,” he said.

According to government estimates, there are more than one million handguns in Canada, which has a population of 38 million people. Some 2,500 stores sell pistols in the country.

At present, a person must have a restricted firearms license in order to purchase a handgun. Most also require a special permit to transport them from any location to another, and they must be in secured cases.

Shooting ranges are about the only places where they can be legally fired.

The new regulations, unveiled after mass shootings killed 21 people at an elementary school in Texas and 10 at a supermarket in New York state, would prohibit the purchase, sale, transfer and importation of handguns.

They are expected to come into force in the fall, along with a border crackdown on weapons smuggling from the United States.

“We are capping the number of handguns in this country,” Trudeau said Monday, citing “a level of gun violence in our communities that is unacceptable.”

Almost two-thirds of gun crimes in Canadian cities over the past decade involved handguns, according to government data.

At That Hunting Store, a man picking up a new handgun for competition, who identified himself as David, lamented the new restrictions on top of already cumbersome rules that drag out purchases.

“It’s ridiculous,” he said. “It takes two months just to get a license with all the background checks.”

Gun shop owners interviewed by AFP unanimously decried the freeze, which must still be passed by parliament.

“This measure is only going to hurt legal gun owners,”  Lavigne said, adding: “It’s not going to reduce any of the crime because the bad guys don’t follow the rules.”

Darryl Tomlinson, owner of Canadian Gun Guys in Winnipeg, said he worries for the future of his store and shooting range, as well as the social network of members.

“This handgun measure is going to take away livelihoods and break up communities,” he said.

“It’s a Catch-22. We’re busy now, but I fear we’re going to be put out of business in the fall,” Tomlinson said of the week’s sales boom.