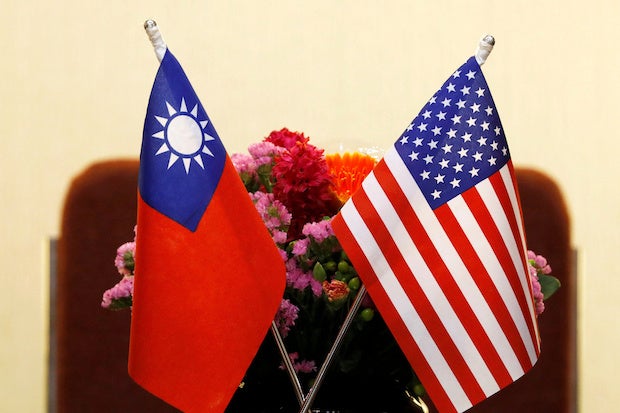 Flags of Taiwan and US are placed for a meeting between US House Foreign Affairs Committee Chairman Ed Royce speaks and with Su Chia-chyuan, President of the Legislative Yuan in Taipei, Taiwan March 27, 2018. (REUTERS/Tyrone Siu/File Photo)

TAIPEI — The U.S. State Department has updated its fact sheet on Taiwan again, to reinstate a line about not supporting formal independence for the Chinese-claimed, democratically-governed island.

Last month the State Department changed the wording on its website on Taiwan, removing wording both on not supporting Taiwan independence and on acknowledging Beijing’s position that Taiwan is part of China, to anger in Beijing.

Washington said the update did not reflect a change in policy. That wording has now be changed again, to reinstate a line saying “we do not support Taiwan independence”.

The change was first reported by Taiwan’s official Central News Agency on Friday, and appears to have happened on May 28, the date at the top of the fact sheet.

The State Department did not immediately respond to a request for comment.

State Department Spokesman Ned Price had said in May that the United States does not support Taiwan independence and “we have repeatedly made this clear both in public and in private”.

Taiwan is already a de facto independent state, though with only very limited international recognition. Washington has no formal ties with Taipei, but is its most important international backer and arms supplier.

Taiwan’s official name remains the Republic of China, the name of the government that fled to the island in 1949 after losing a civil war with the Communist Party who set up the People’s Republic of China with its capital in Beijing.

The Chinese government in 2005 passed a law giving Beijing the legal basis for military action if it judges Taiwan to have seceded or to be about to.

Taiwan’s government says only the island’s 23 million people have the right to decide their future, and while it wants peace will defend itself if attacked.

No change in US policy towards Taiwan, says White House official