De Lima to cop Espenido: Be like witnesses, tell truth 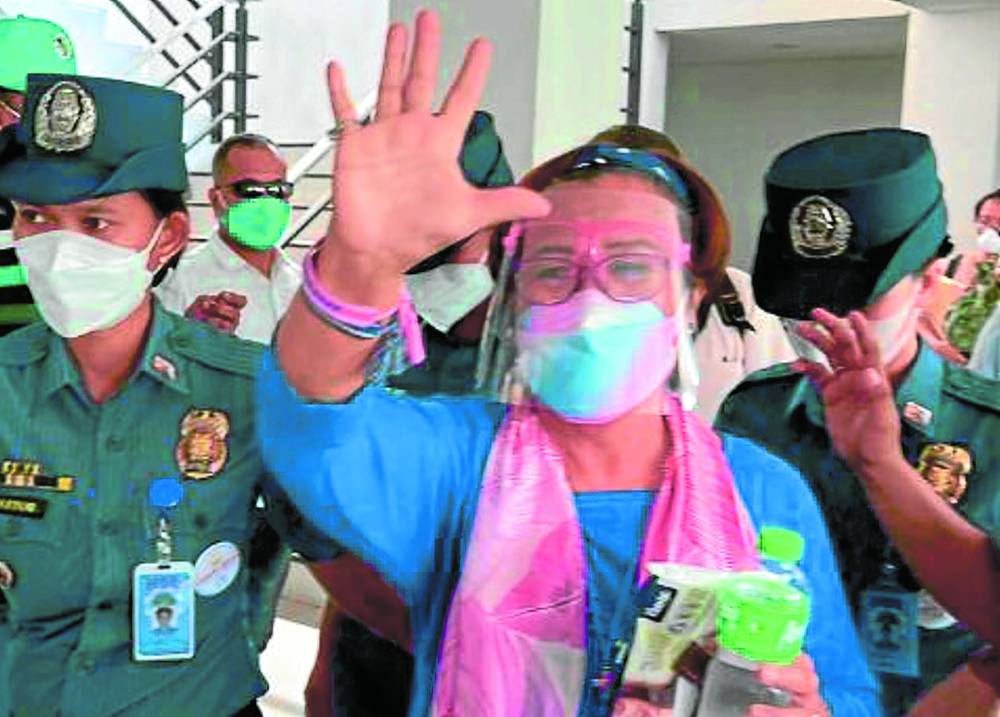 “Come clean and tell the truth,” detained Sen. Leila de Lima on Thursday urged a ranking police officer who supposedly coerced a state witness into accusing her of receiving drug money when she was justice secretary.

Marcelo Adorco, presented by the prosecution as a bodyguard of confessed drug lord Kerwin Espinosa, has recanted his 2016 and 2017 affidavits in which he linked De Lima, his supposed boss, and other personalities to the illegal drug trade at New Bilibid Prison (NBP).

In a counteraffidavit filed at the Department of Justice (DOJ) on May 24, Adorco denied working for Espinosa or knowing De Lima, and accused Lt. Col. Jovie Espenido, a former police chief of Albuera, Leyte, of forcing him to sign his earlier sworn statements.

From her cell in Camp Crame, De Lima issued a statement that Espenido “knows I have absolutely no links to confessed drug lord Kerwin Espinosa and /or any involvement in the illegal drug trade.”

Adorco also said he had no personal knowledge of Espinosa’s supposed meeting with De Lima in March 2016 in Baguio City, adding that the controversial photograph of the two had been taken from Facebook.

“The police just gave [the photo] to me when my affidavit was done,” he said.

Filibon Tacardon, one of De Lima’s lawyers, said Adorco’s recantation only underscored the “pattern of witnesses admitting to being threatened and coerced to tell lies and pin people down.”

Espinosa himself, former Bureau of Corrections acting chief Rafael Ragos and De Lima’s former aide Ronnie Dayan have earlier recanted, saying they had been intimidated by government officials into making false allegations against her.

In the latest hearing in one of the two remaining drug cases against De Lima, convicted murderer Joel Capones also denied knowing and transacting with the senator.

Adorco was a personal bodyguard and driver of Espinosa’s father, Albuera Mayor Rolando Espinosa, who was killed while in detention at the town’s police station. He was presented by the prosecution for knowing the drug dealings of the Espinosa family.

According to Adorco, the affidavits were prepared by a police officer on the orders of Espenido, the then chief of the Albuera police station where he was held on drug charges in 2016.

He claimed not having been assisted by legal counsel, informed of his rights, or warned of the possibility that his own affidavit could be used against him. Adorco is facing drug charges along with the younger Espinosa at the DOJ, which prompted him to file a counteraffidavit.

“Sir Espenido told me that my life is in danger, and the only way for me to be spared is to testify against Kerwin and others, because he will put me under the Witness Protection Program (WPP),” he said.

Adorco said Espenido also promised that he would receive financial aid as part of the WPP.

But no money ever came and the drug charges against him were not withdrawn, Adorco said. Instead, he was sentenced to life imprisonment at NBP.

He added to the drug connection Lovely Impal, the alleged drug queen of Mindanao and the supposed supplier of the Espinosas, in his 2017 affidavits.

Adorco said he submitted a counteraffidavit dated Aug. 11, 2020, to the DOJ on Aug. 28, 2020, in which he denied involvement in illegal drugs and withdrew his claims.

“I don’t know Lovely Impal, Peter Co, Peter Lim and Secretary Leila de Lima. I have not seen them and talked to them even once,” he said in his 2020 affidavit. “I have no personal knowledge about the alleged meeting of Kerwin and Secretary De Lima in Baguio City.”

Adorco is not a witness in any of the three original cases of conspiracy to commit drug trading filed by the DOJ against De Lima at the Muntinlupa City Regional Trial Court (RTC).

He was mainly presented as a state witness in the drug cases against Kerwin Espinosa, Co and Impal at the Manila RTC.

In December 2021, the Makati RTC dismissed another drug case against Espinosa, Co, Impal and Adorco after it granted their demurrer to evidence.

Tacardon said Adorco’s affidavit proved the De Lima camp’s longstanding assertion: “that the cases against Senator De Lima are mere fabrications of people who were intimidated and pressured to make lies and to show that she is involved in the trade in illegal drugs.”

“The truth is unraveling, so we are calling on the DOJ to review the cases…” he said.