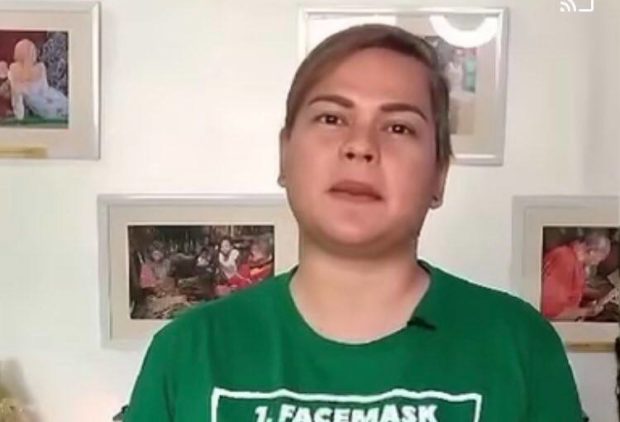 MANILA, Philippines — Vice President-elect Sara Duterte-Carpio did not make a remark pushing for a K14+ basic education program and two-year mandatory service in the Armed Forces of the Philippines (AFP) without salary, her camp said Thursday.

According to the quote card, Duterte-Carpio, who will serve as education secretary under the administration of President-elect Ferdinand Marcos Jr., supposedly said that she would “immediately ask Congress to amend the K12 program to K14+ basic education program” once she assumes the post.

Further, the quote card claims that Duterte-Carpio said the Reserve Officers’ Training Corps (ROTC) will once again be required “plus two years mandatory service in the AFP without salary.”

Duterte-Carpio’s office, however, denied that the Vice President-elect made such remarks.

“A quote card has been circulating in social media falsely attributing to Vice President-elect Sara Duterte remarks regarding a supposed proposal to amend the K to 12 Program and the introduction of ROTC and mandatory service in the AFP,” Frasco said in a statement.

“Vice President-elect Sara Duterte has never released any statements to this effect. The quote card is fake,” she added.

Frasco urged the public to be circumspect against persons and groups “who will no doubt continue to proliferate disinformation” against Duterte-Carpio “due to their own vested interests.”

“This is not the first, and we anticipate that this will not be the last of these nefarious attempts to discredit, attack, and attribute lies and conjectures against Vice President-elect Sara Duterte as she transitions into the role of the Vice President and the Secretary of Education,” Frasco said.

What was said in the past

In January, Duterte-Carpio said that if she gets elected vice president, she would push for mandatory military service for all Filipinos reaching the age of 18 – male or female.

However, contrary to what was stated on the quote card, Duterte-Carpio’s remarks back then were that those entering the program will be given a subsidy.

Since being elected as Vice President, Duterte-Carpio has not bared plans on whether or not she will push through with this proposal.

On May 13, her camp said there were no discussions with the Department of Education regarding making ROTC mandatory.

Meanwhile, on the issue of the K-12 program, no news report indicates that Duterte-Carpio said in the past that she will push for a K14+ basic education system.