Biden closing in on new weapons package for Ukraine 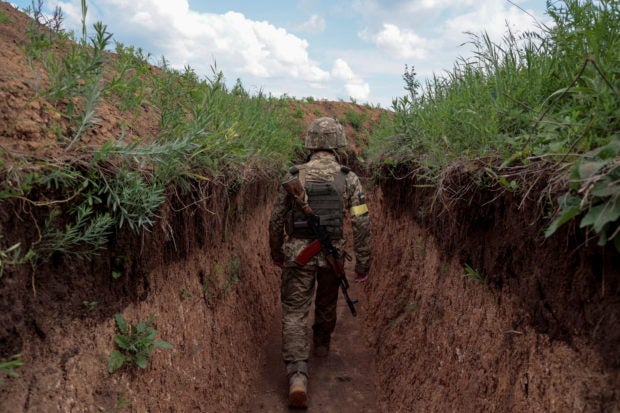 A Ukrainian serviceman walks in a trench at a position near a frontline, as Russia’s attack on Ukraine continues, in Donetsk Region, Ukraine May 29, 2022. REUTERS/Serhii Nuzhnenko

WASHINGTON — U.S. President Joe Biden and his team are still considering sending longer-range rocket systems to Ukraine but do not want them used to launch attacks inside Russian territory, the White House said on Tuesday.

U.S. officials said Biden and his national security aides are in the final stages of preparing a new weapons package for Ukraine with an announcement expected soon, possibly as early as Wednesday.

Ukrainian officials have been asking allies for longer-range systems including the Multiple Launch Rocket System, or MLRS, that can fire a barrage of rockets hundreds of miles away, in the hopes of turning the tide in the three-month-long war.

“But as the president said, we won’t be sending long-range rockets for use beyond the battlefield in Ukraine,” she said. Other U.S. officials have said Biden does not want them launched into Russian territory to avoid broadening the Ukraine war.

Biden on Tuesday told reporters that “we’re not going to send to Ukraine rocket systems that strike into Russia.”

He did not rule out providing any specific weapons system, but instead appeared to be placing conditions on how they could be used. Biden and his team are working on a new package of military equipment using some of the money from a $40 million budget appropriation approved by the U.S. Congress.

The MLRS was under consideration, but nothing with long-range strike capabilities outside of battlefield use, a senior administration official said.

Biden wants to help Ukraine defend itself but has been opposed to providing weapons that Ukraine could use to attack Russia.

Thousands of people have been killed in Ukraine and millions more displaced since the Russian invasion on Feb. 24, which Moscow calls a “special military operation” to “denazify” its neighbor. Ukraine and its Western allies call this a baseless pretext for a war to seize territory.

The West has been increasingly willing to give Ukraine longer-range weaponry, including M777 howitzers, as its force battle Russians with more success than intelligence officials had predicted.

But U.S. intelligence has also warned about growing risks, particularly given a mismatch between Russian President Vladimir Putin’s apparent ambitions and the performance of his military.