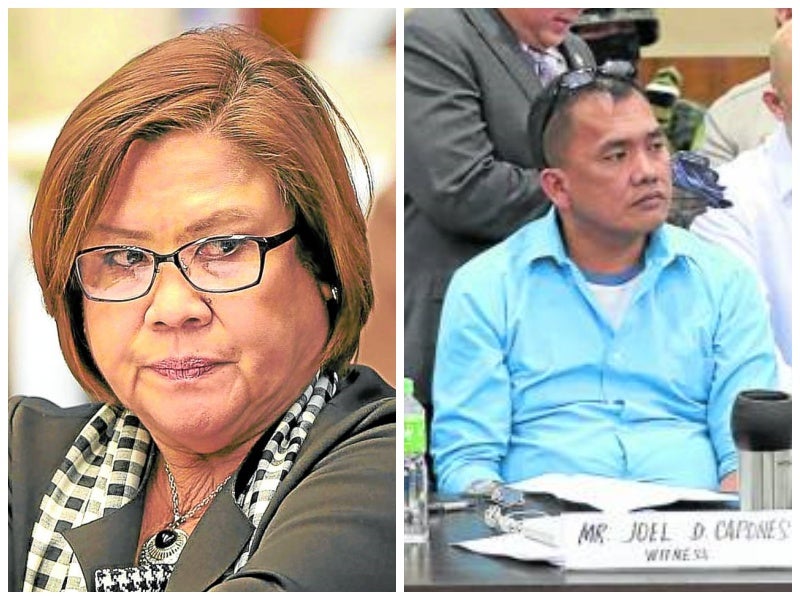 MANILA, Philippines — Prosecution witness and convicted murderer Joel Capones denied in open court that he had transacted with, identified, or even knew Senator Leila De Lima.

This was stated by Atty. Filibon “Boni” Tacardon, one of De Lima’s legal counsels, after a hearing at the Muntinlupa regional trial court on Monday — which was the continuation of the cross-examination of Capones, who alleged that De Lima received drug money from the late high-profile inmate Jaybee Sebastian.

(But since Jaybee Sebastian has passed, he can no longer dispute his alleged transaction regarding illegal drugs.)

(The second point that we think is good is when he was asked — when he was first asked in the direct examination, he said he saw that Jaybee Sebastian had handed [De Lima] money. But when we asked him again during the cross-examination, the exact words he said were ‘what money?’)

Capones also denied personally knowing De Lima and her former aide Ronnie Dayan and having personal transactions with them.

With another witness failing to link De Lima to the illegal drug trade, Tacardon said he believed the Prosecution still has yet to present strong and sufficient evidence to justify De Lima’s detention.

Meanwhile, in seeking reconsideration of the dismissal of the complaint against Capones, De Lima’s lawyers stressed that “we are not questioning the legal principle that a mere confession, and indeed the mere testimony of an alleged co-conspirator, which is not corroborated by the corpus delicti, is insufficient to put a person on trial, much less for conviction.”

“That has been our unwavering position since 2016. But this complaint against Capones is at the preliminary investigation stage, and yet the DOJ cannot even be moved to lift a finger and issue a subpoena to get him to answer for his own self-confessed crimes? By the same token, the cases against the Senator should never have progressed beyond the DOJ preliminary investigation back in November 2016. Instead, they did their best to waste five years of a human being’s life, and an elected Senator’s mandate out of fear of the truth she speaks,” they added.