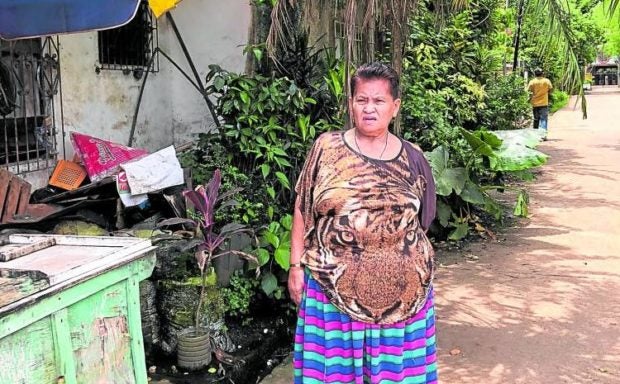 ‘WE DON’T FORGET’ | Salvina Isic Fontillas, 67, on Saturday shows the path at the back of the Church of St. Peter the Apostle compound in Lamitan City where the bandits made their escape on June 2, 2001. (Photo by JULIE ALIPALA / Inquirer Mindanao)

Fr. Cirilo Nacorda, now the chaplain of the Catholic Diocese of Cleveland, recalled what he heard 21 years ago, at past 11 p.m. of June 1, 2001, when the compound of Don Jose Torres Hospital in Maganda village here turned into a battle zone, following the entry of more than 60 armed Abu Sayyaf Group fighters inside.

Nacorda, then parish priest of Lamitan’s Church of St. Peter the Apostle parish that adjoins the hospital, escaped death only because something had kept him awake that night.

“I can still remember that horrible incident, the deaths of my driver, my sacristan, and one of my escorts, the way the bandits attacked our people and how the government addressed the crisis,” Nacorda, who is now an American citizen, told the Inquirer through Facebook Messenger.

“Even to this day, there is no formal closure [to what happened during that siege],” he said.

Five days before the siege of Lamitan, armed men had abducted 20 people, including American missionaries Martin and Gracia Burnham, from the Dos Palmas resort in Palawan province. They entered the hospital late at night on June 1 seeking treatment for their wounded.

Fatimah Lakibul, 45, who was a 24-year-old helper in a nearby bakery, recalled that when shots were fired that night, they initially dismissed it as “one of the usual raids, so we went on preparing bread for the next day.”

But when they woke up at dawn, they still heard heavy firing from different locations and people shouting. “We were afraid to get out of the bakery because we saw so many armed men circling the Catholic Church,” Lakibul said.

When some armed men attempted to barge into the rear gate of the bakery, they immediately ran for their lives. “I thought that was our end,” Lakibul recalled. “My fellow workers escaped by jumping over the rear-end wall of the bakery. We heard shots but we kept on running until we reached Quezon Avenue, where soldiers were in position.”

Nacorda said the bandits used the bakery, which was just beside the church, to get into the church and the hospital. Based on the narratives he gathered during the congressional inquiry months after the incident, the followers of Gadhafi Janjalani and Abu Suleiman took more than 20 hostages from Dos Palmas and sailed to Basilan to bring their wounded to the hospital for treatment. 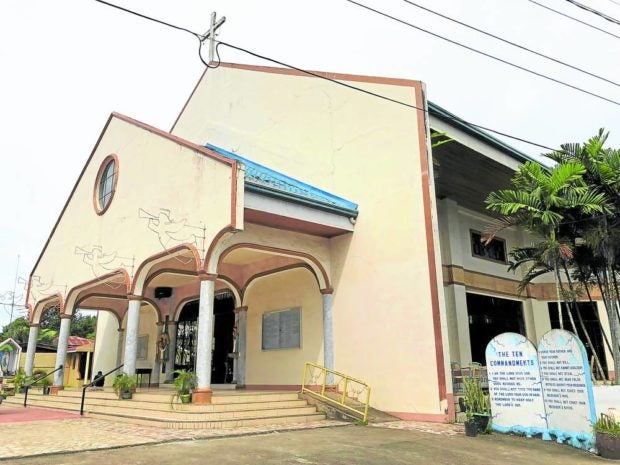 RESTORED | The Church of St. Peter the Apostle in Lamitan City no longer bears signs of ravage when it was occupied by the Abu Sayyaf Group bandits on June 1, 2001, but memories of the siege remain fresh in the minds of those who survived the attack. (Photo by JULIE ALIPALA / Inquirer Mindanao)

Aside from the Burnham couple, Peruvian American Gullermo Sobero and 17 other Filipinos were among the 20 hostages. Gracia Burnham survived but her husband Martin was killed during a rescue attempt. Sobero was beheaded.

The Abu Sayyaf’s occupation of the hospital and church prompted a large-scale military response from the government, which destroyed houses near the compound and displaced more than a thousand residents who fled to safety.

“We were all trapped,” said Salvina Isic Fontillas, 67, a widow living near the area, who could still remember the sounds of the air and ground assaults waged by the military, prompting almost a dozen family members to hide under the concrete lavatory of their kitchen. “We did not know where to run, there was heavy shelling, the ground and the roof were shaking. We all prayed hard for safety until soldiers came and helped us,” she said.

Despite being surrounded by more than 2,000 troops, the bandits still escaped, taking along with them more hostages.

Among the hostages taken from the hospital were two midwives, a nurse, a hospital staffer; and from the church, Fr. Rene Enriquez and seminarian Junjun Gadia.

More than two decades had passed but the event stayed fresh in the minds of survivors like Nacorda, who were wondering why the national government at that time was bent on erasing the public memory of the tragic event.

“Until now, the tragedy remains a painful memory for the people of Basilan and no one had been held into account, except that the attack was done by the Abu Sayyaf,” said Ozamiz City Bishop Martin Jumoad, a senior Diocesan priest when the incident happened. “I also wonder why there was no event to commemorate that tragic day,” he observed.

“In fact, even the national government was quick to erase any traces of violence by rehabilitating the church and the hospital,” Nacorda said.

“We were against the rehabilitation then because we already had plans to rebuild a new one prior to the attack, but President Gloria Macapagal-Arroyo wanted all the traces of the atrocities erased, so what I did was put up a marker beside the church to serve as a memory,” Nacorda said.

He said that out of chaos, fear and pain, people in Lamitan might have preferred to forget what happened. “During those days, we were all trying to get back to normal lives and everyone was focused on the congressional inquiry that we forgot to ask our people how were they coping,” he said.

The government never made the results of the congressional inquiry public, which left more questions hanging, he lamented.

Arlyn Jawad Jumao-as, president of Save the Children of War in Basilan, agreed the people needed closure from what happened in Lamitan. “A healing not just among residents of Lamitan but most especially for the victims,” she said. “There were so many atrocities in the past, but I have not heard of any proper healing process done involving the government, the victims and perhaps the perpetrators; especially those who have long surrendered to the government.”

She added: “The people may appear to have forgotten what transpired 20 years ago. But for those who were victimized, the pain, the anger and fear are still there. For as long as their traumatic experiences were not processed properly, those emotions might find their way out in the future.”

Newly elected Mayor Roderick Furigay, however, said he did not believe the government had not initiated a healing process with the victims.

“There is no commemoration for the June 1, 2001, siege because people in Lamitan wanted to move on from the horrors of the past and to focus on how to eliminate terror and improve the city,” Furigay said.