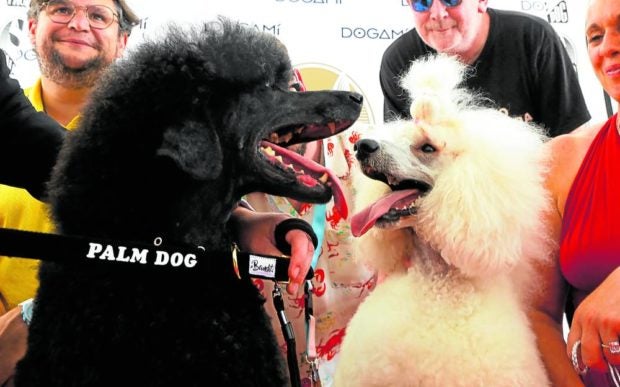 CANNES, France — Film buffs have to wait until Saturday for the Cannes Film Festival’s top prize, the Palme d’Or, but the real scene-stealers get their awards a day earlier — at the annual Palm Dog ceremony.

Britney, who plays a well-loved character called Beast, was unable to attend the ceremony, but two elaborately coiffed poodles stood in to receive her prize.

Keough and codirector Gina Gammell accepted the award via prerecorded video, saying they were “so honored.”

Dogs of all shapes and sizes — including a number of seasoned veterans of the popular event — flocked to the beach along the palm tree-lined Croisette in the southern French city to take in the ceremony, greeting fellow furry-haired friends with wagging tales and nose bumps, and breaking out into rounds of barking when the audience clapped.

Founded in 2001 by film journalist Toby Rose, the Palm Dog award honors top dogs on the screen, with categories including jury prize and the so-called “Palm DogManitarian,” celebrating the bond between people and their canine companions.

This year’s dogmanitarian was Patron, a Jack Russell terrier in Kyiv who detects bombs with his nose.

Patron, who was also honored with a medal by Ukrainian President Volodymyr Zelenskyy earlier this month, was unable to travel to Cannes for his Palm Dog collar. Luckily, lookalike Opium was on hand to accept the award in his place.

A new award was added this year, the Elvis Palm Hound Dog — a nod to Baz Luhrmann’s “Elvis” biopic, a top festival draw. It went to Titane, a sharp-muzzled mutt with pointy ears.