Protests and dispersals: What to know 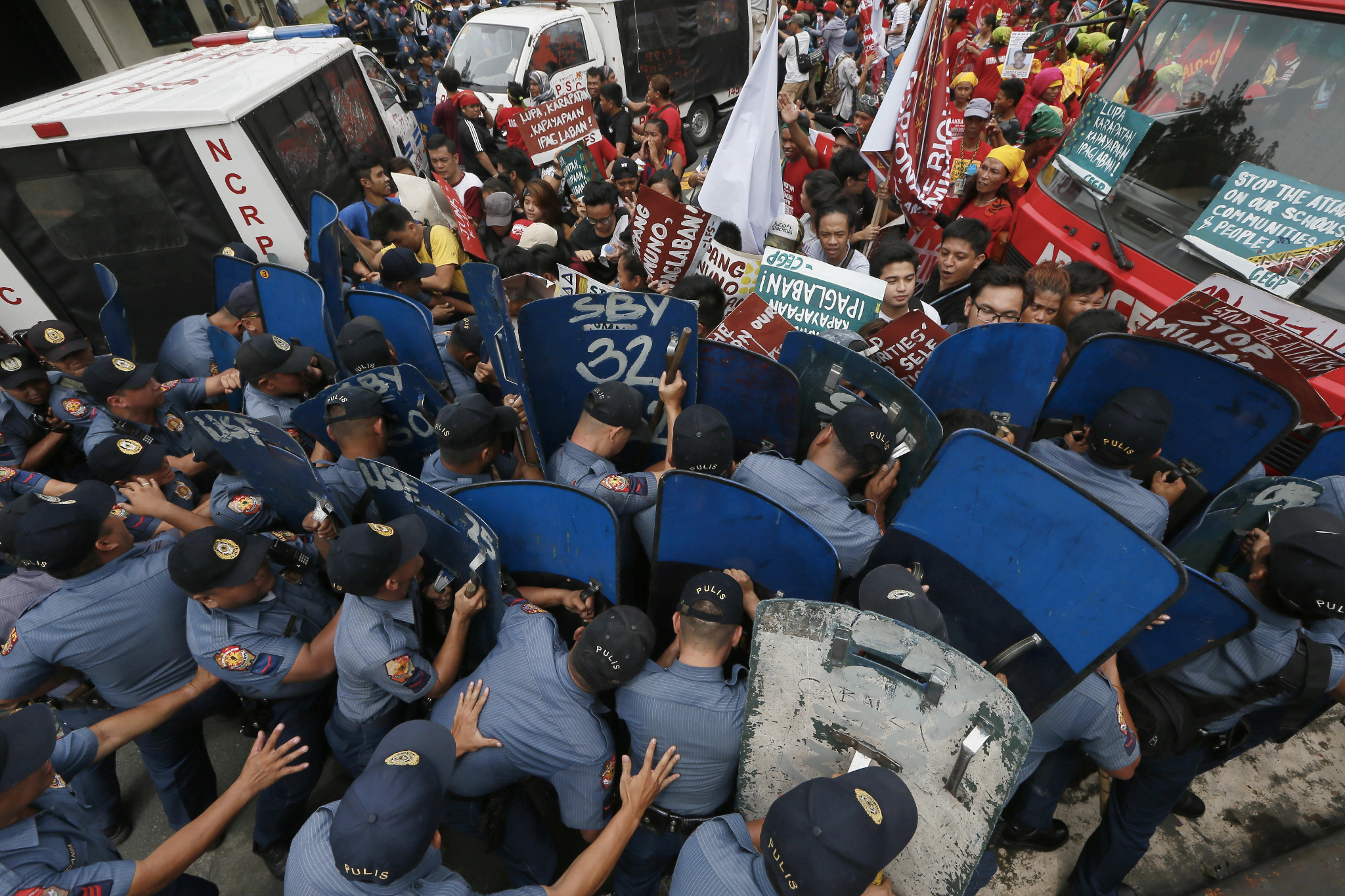 FILE PHOTO: Manila policemen with shields block protesters from approaching the US Embassy on Oct. 19, 2016. Dozens were hurt when cops forcibly dispersed the protesters calling for an independent foreign affairs policy for the Philippines.

MANILA, Philippines—“Essential and vital to the strength and stability of the State”.

This was how Batas Pambansa (BP) Bilang 880 described the constitutional right of the people peaceably to assemble and petition the government for redress of grievances, stressing that the State shall make certain the free exercise of this right without prejudice to the rights of others to life, liberty and equal protection of the law.

However, last Wednesday (May 25), a protest within the compound of the Commission on Human Rights (CHR) in Diliman, Quezon City was dispersed by police using water cannons.

The protest, which was attended by 200 individuals, had been joined by victims of the martial law who were assailing the impending proclamation of Ferdinand Marcos Jr. as president-elect at the Batasang Pambansa.

The National Capital Region Police Office (NCRPO) said an estimated 200 protesters were at CHR’s Liwasang Diokno, a freedom park where people are allowed to stage a public assembly “even without a permit”.

A freedom park, the law stated, is a place in every city or municipality that is designated within six months since the effectivity of BP 880: “As far as practicable, shall be centrally located within the poblacion where demonstrations and meetings may be held at any time without the need of any prior permit.” 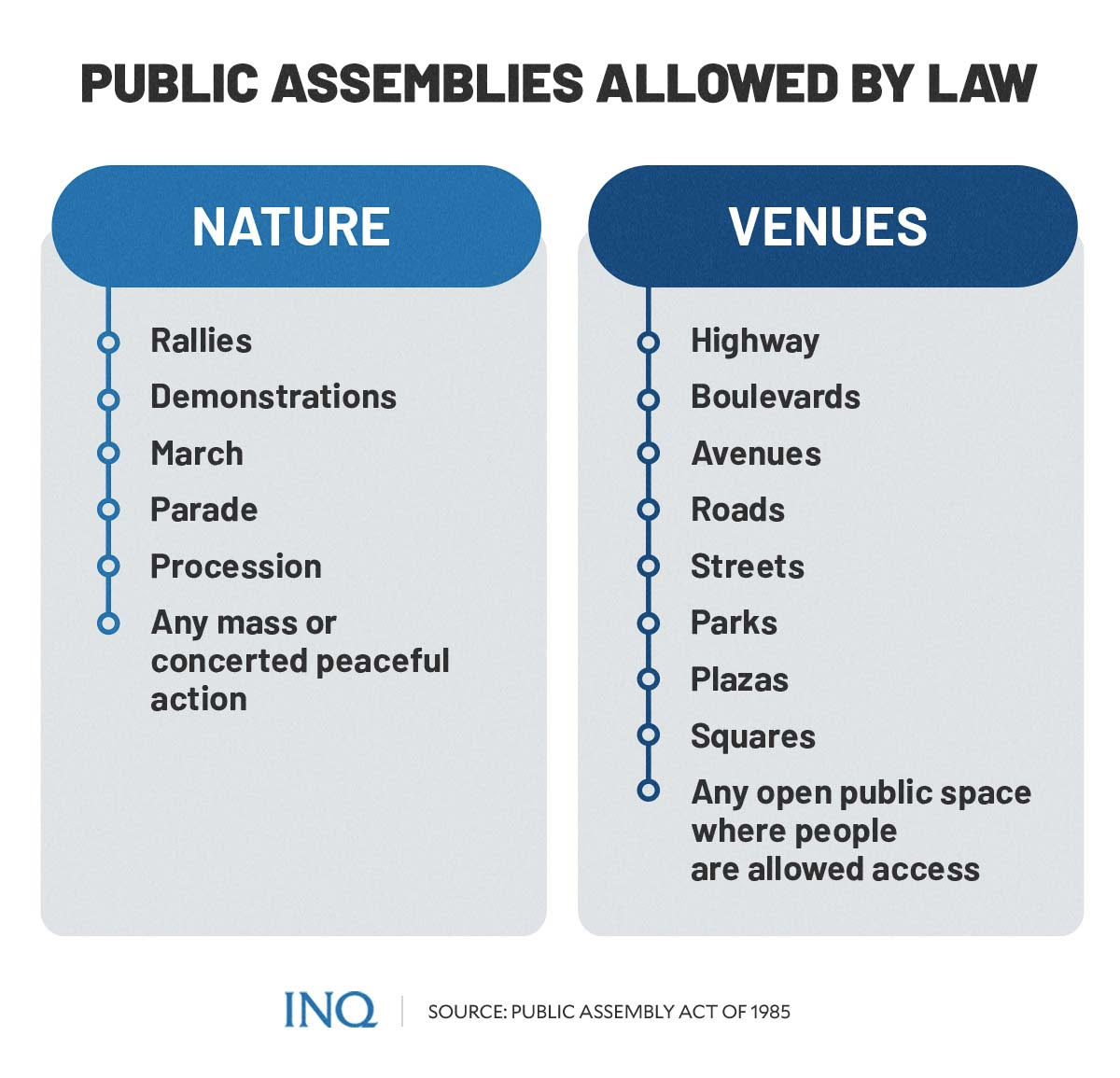 A public assembly, which can be held on a highway, boulevard, avenue, road, street, park, plaza and any open space of public ownership where the people are allowed access, can be a rally, demonstration, march, parade, procession or any mass or concerted action for these purposes:

The NCRPO said the protesters attempted to proceed outside the Liwasang Diokno to advance toward Batasang Pambansa. It said “a brief scuffle ensued when a group of protesters who were denied passage along Commonwealth Avenue attacked police contingents.”

“Protesters tried to kick and waggle the shields of the police force,” the NCRPO said while stressing that the incident prompted the firemen to bomb the protesters with water.

However, human rights group Karapatan, which condemned “in strongest possible terms” the attempt of the Philippine National Police (PNP) to violently disperse the peaceful indignation protest, stressed that what the police said were lies.

Health marshals, it said, have reported that 10 protesters were injured “after being hit with truncheons and shields while the protest was being bombed with water”. The police, however, said broken shields, which are made out of plastic, “may have caused injury to anybody who has come in contact with it if applied with considerable force”.

“We will not take these violations sitting down, and in the face of the looming return of the forces of tyranny and fascism, all the more that we will protest and resist any and all attempts to unleash the horrors of martial law and State repression,” Karapatan said.

The dispersal of the protest within the CHR compound came a few days after the dispersal of activists who were on their way to the United States (US) Embassy in Manila to protest the visit of US President Joseph Biden to South Korea and Japan.

What does the law say? 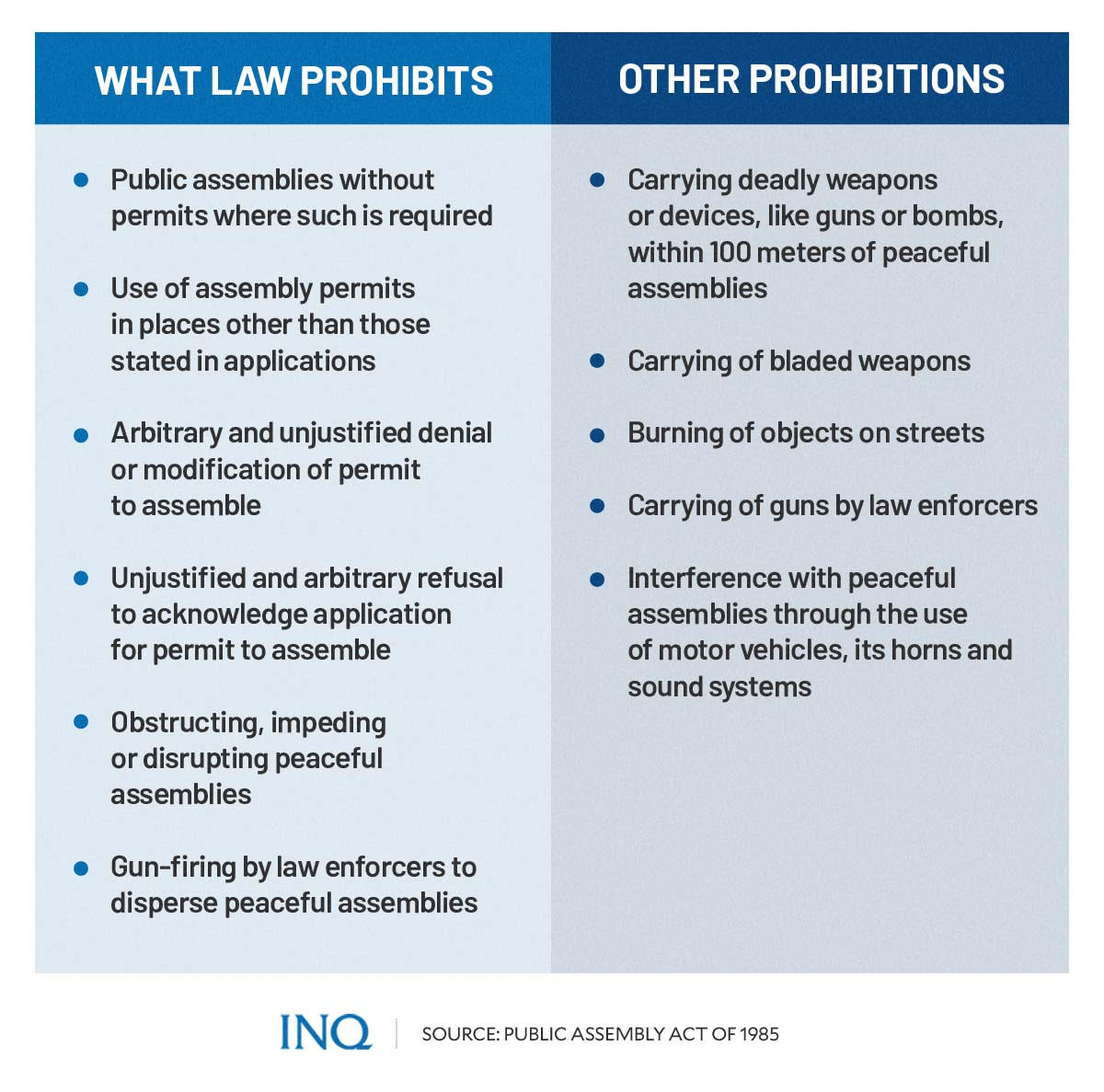 However, lawyer Edre Olalia, the president of the National Union of People’s Lawyers which took the fight against the law before the Supreme Court, said the permit should not be the basis to exercise one’s right—a constitutional and even a universal right.

“The permit is a mere administrative requirement. It is not a condition sine qua non (essential) for the exercise of a peaceful public assembly,” he told INQUIRER.net.

The law stated that the applicant shall have these responsibilities to make certain that the public assembly will be peacefully conducted in accordance with the conditions set in the permit given by the local government unit:

While the law is clear that law enforcers shall not interfere with the holding of a public assembly, a law enforcement contingent under the command of a responsible police officer may be detailed and stationed in a place at least 100 meters away from the area of activity ready to maintain peace and order at all times. 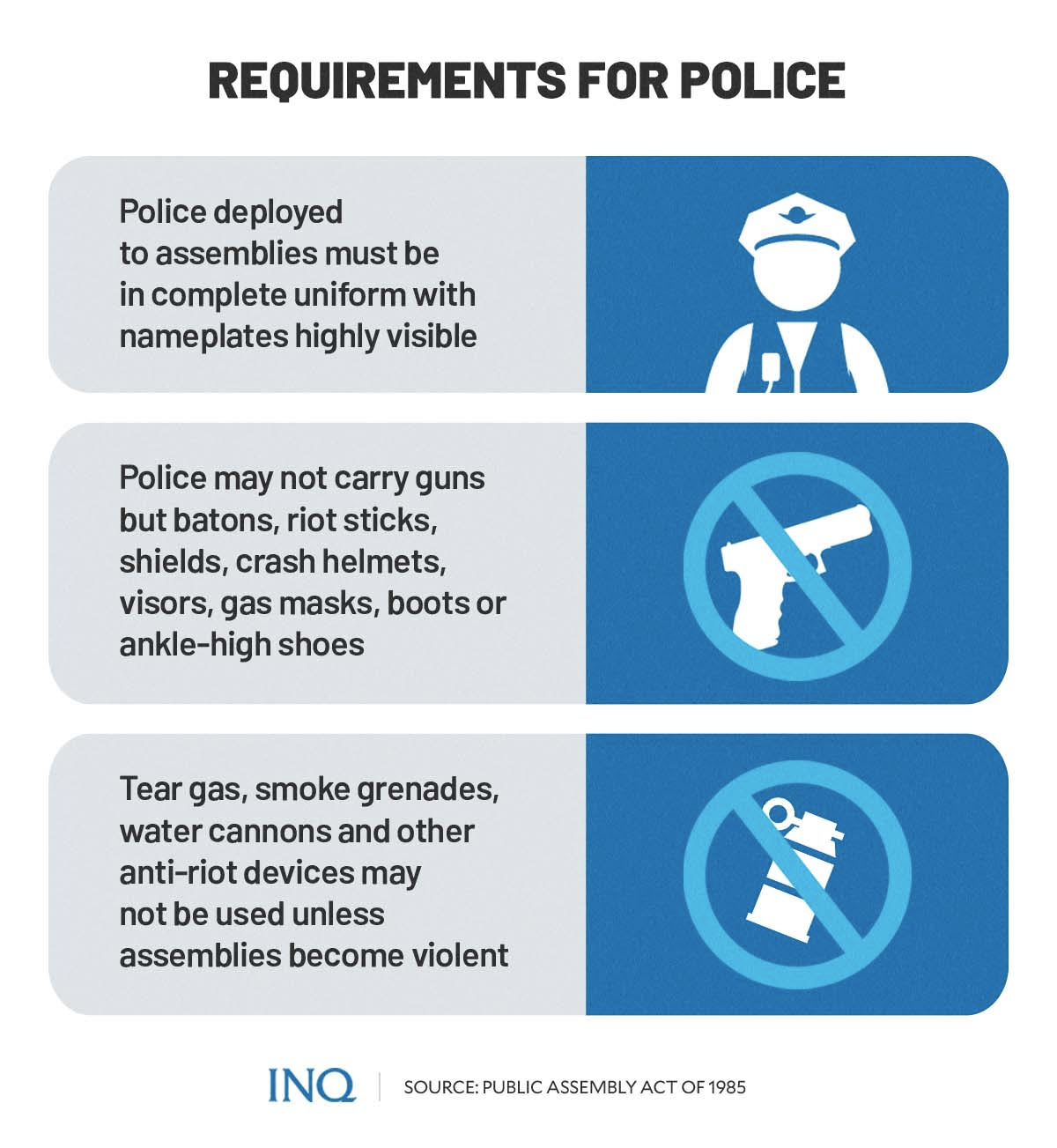 When police assistance is requested, however, the law has set these guidelines

This means that the highest degree of restraint shall be observed by the military, police and other peacekeeping officials, especially in the dispersal of a public assembly.

When should dispersals take place?

BP 880 stated that no public assembly with a permit shall be dispersed, however, when an activity becomes violent, the police may disperse:

“How many were the protesters yesterday? The police action of blocking their way was a provocation. Instead of deescalating [the tension], it even escalated, heightened,” he said.

Activist Kej Andres, who was at the CHR compound during the dispersal, told INQUIRER.net that they were still inside the Liwasang Diokno when the police started blocking their way even when they only asserted having the protest at the sidewalk or at the first lane, “like what we are usually doing”.

“As we were trying to advance, the police used truncheons to hurt […] the others even had yantoks. Even our poster was grabbed along with an elderly official of the Samahan ng Ex-Detainees Laban sa Detensyon at Aresto, who is also a victim of martial law,” activist Jong Juguilon said.

One of the actions prohibited by the law is “obstructing, impeding, disrupting or otherwise denying the exercise of the right to peaceful assembly”.

During the protest near the US Embassy in Manila, two activists were arrested, including a campus journalist, Lloyd Manango of the University of the Philippines Manila-College of Arts and Sciences.

Manango was also released later that day,  but Olalia said his arrest could already be considered illegal: “There is a jurisprudence that an invitation, if against one’s wishes, is already an illegal arrest.”

He said the general rules on warrantless arrest, as stated in the Rules of Court, Rule 113, Section 5, also apply. These are the rules, as listed by the PNP website:

Manango, however, was only covering the protest when he was taken by the police and brought to the station.