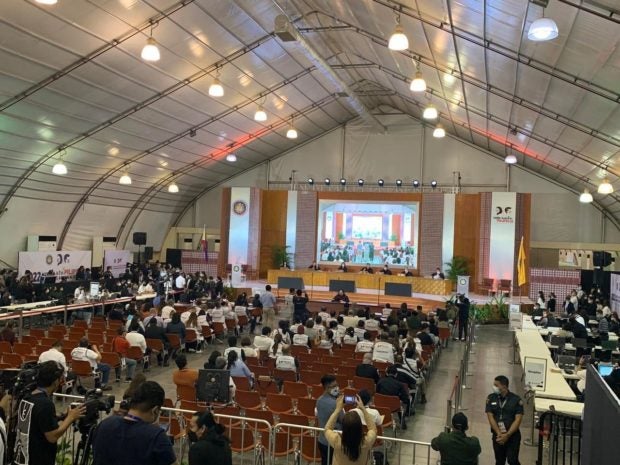 The Commission on Elections (Comelec) en banc convenes as the National Board of Canvassers (NBOC) on Monday, May 9, 2022, for senatorial and party-list positions for the 2022 polls. Photo from Comelec Facebook page

MANILA, Philippines — The Commission on Elections (Comelec), sitting as the National Board of Canvassers, may proclaim the winners in this year’s party-list election “if not tomorrow (Thursday), the latest is Friday.”

This was according to Comelec Commissioner George Garcia as the NBOC resumed Wednesday the canvassing of votes for party-list groups at the Philippine International Convention Center (PICC) in Pasay City. Party-list groups are set to occupy 63 seats in the House of Representatives.

Garcia said proclamation of triumphant party-list groups will be made despite the pending resolution of petitions, which the poll body official did not elaborate.

READ: Comelec: Canvassing of votes for party-list groups to resume May 25

Garcia assured that the canvassing of votes for party-list groups will be finished on Wednesday.

The proclamation of winning party-list groups was put on hold since the Comelec needed to wait for the results of the special elections in the 12 barangays of Tubaran town in Lanao del Sur – a town with around 7,000 registered voters, which turnout may reach up to 70 percent. Special elections were held in Tubaran on Tuesday.

(Hopefully, because the results will be brought to us later, we could canvass the entire Lanao del Sur, and settle this to see if their votes will have an effect on the ranking 63, 64, and 62 of the party lists.)