Hypertension: What to know about the ‘silent killer’ | Inquirer News
Close
menu
search

Hypertension: What to know about the ‘silent killer’ 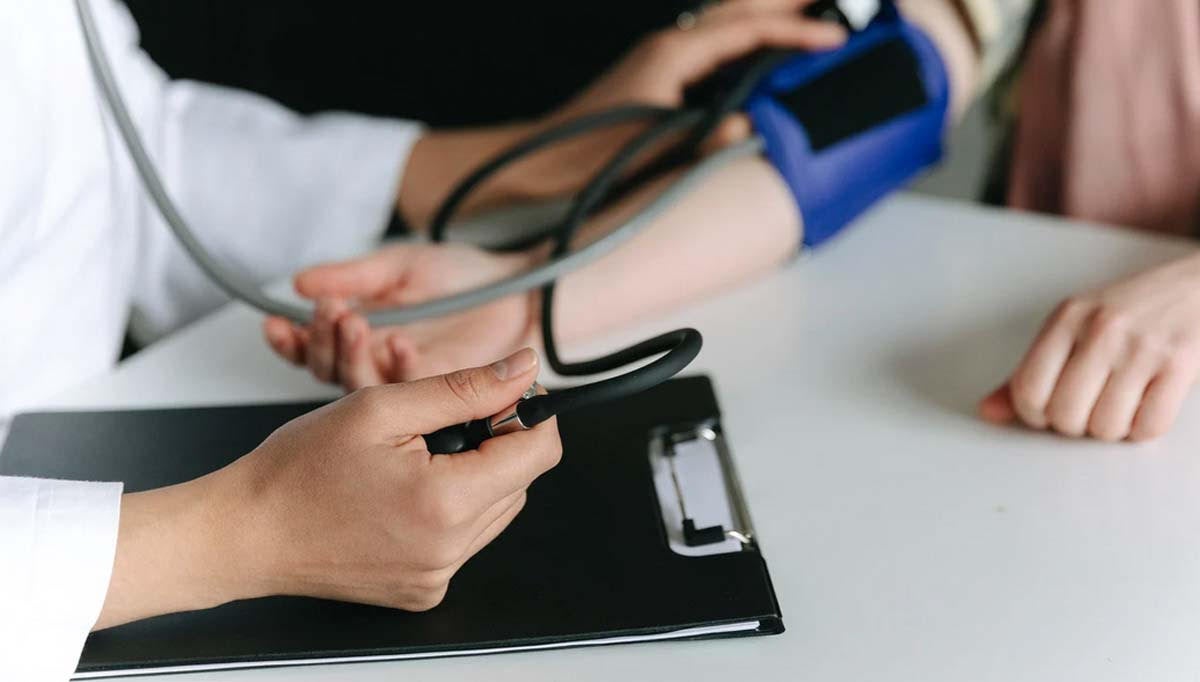 MANILA, Philippines—Did you know that May is national hypertension awareness month in the Philippines?

The month of May was declared Hypertension Awareness Month by Proclamation No. 1761 signed on May 1, 2009 by former president Gloria Macapagal Arroyo.

“Nearly eight million adult Filipinos suffer from hypertension and its cardiovascular complications and tens of thousands are unnecessarily disabled and/or die prematurely from it,” the proclamation stated.

“The impact of premature death and disability is counted not only in the loss that families bear but also on the negative effects on our national productivity and socio-economic development,” it added.

“It is urgent that the different strategies in the prevention, treatment and control of hypertension be actively pursued to reduce hypertension-related deaths and disability,” it continued.

Across the globe, countries observe World Hypertension Day every 17th of May.

According to World Health Organization (WHO) hypertension, also known as high blood pressure, happens when the pressure of blood pushing against the walls of the body’s arteries gets too high.

It is considered a serious medical condition which significantly increases the risk of heart, brain, kidney and other diseases.

In this article, INQUIRER.net will provide details about hypertension, its prevalence in the Philippines, and how people can manage and measure blood pressure accurately—in line with this year’s theme for the observance of the World Hypertension Awareness Day.

The theme for the recent international observation of World Hypertension Day was “Measure Accurately, Control It, Live Longer!”

A person’s blood pressure changes throughout the day based on their activities.

Blood pressure, according to Mayo Clinic, is determined by both the amount of blood the heart pumps and the amount of resistance to blood flow in the arteries.

“The more blood your heart pumps and the narrower your arteries, the higher your blood pressure,” said Mayo Clinic, a US-based nonprofit academic medical center.

Measuring one’s blood pressure, according to the Pan American Health Organization (PAHO), is “crucial” to know if a person has hypertension.

A general guideline for blood pressure reading is that there are two important numbers, written as millimeters of mercury (mm Hg):

“If you have hypertension (blood pressure ≥ 140/90 mmHg), you should seek advice from a health professional,” PAHO advised.

“Some health care professionals diagnose patients with high blood pressure if their blood pressure is consistently 140/90 mm Hg or higher. This limit is based on a guideline released in 2003, as seen in the table below,” the US CDC explained.

“Other health care professionals diagnose patients with high blood pressure if their blood pressure is consistently 130/80 mm Hg or higher. This limit is based on a guideline released in 2017,” it added. 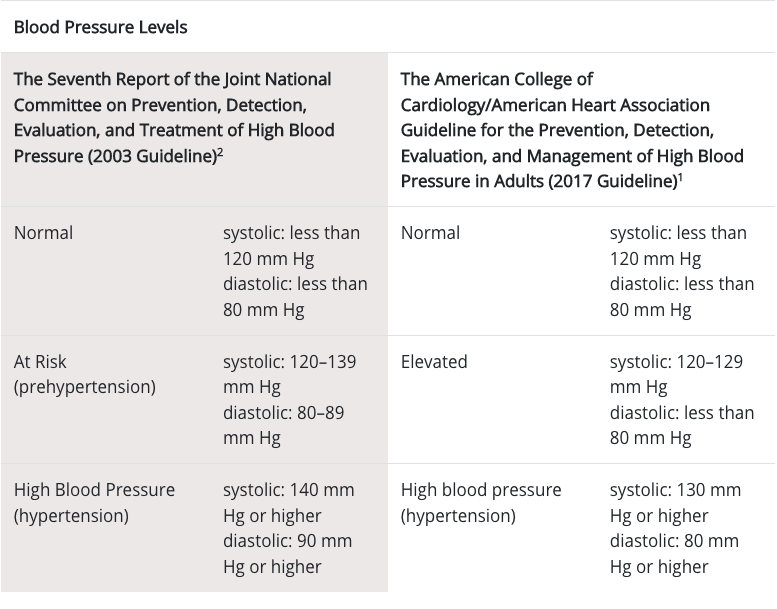 Health care providers, according to Cleveland Clinic, will also diagnose a person with one of two types of high blood pressure: 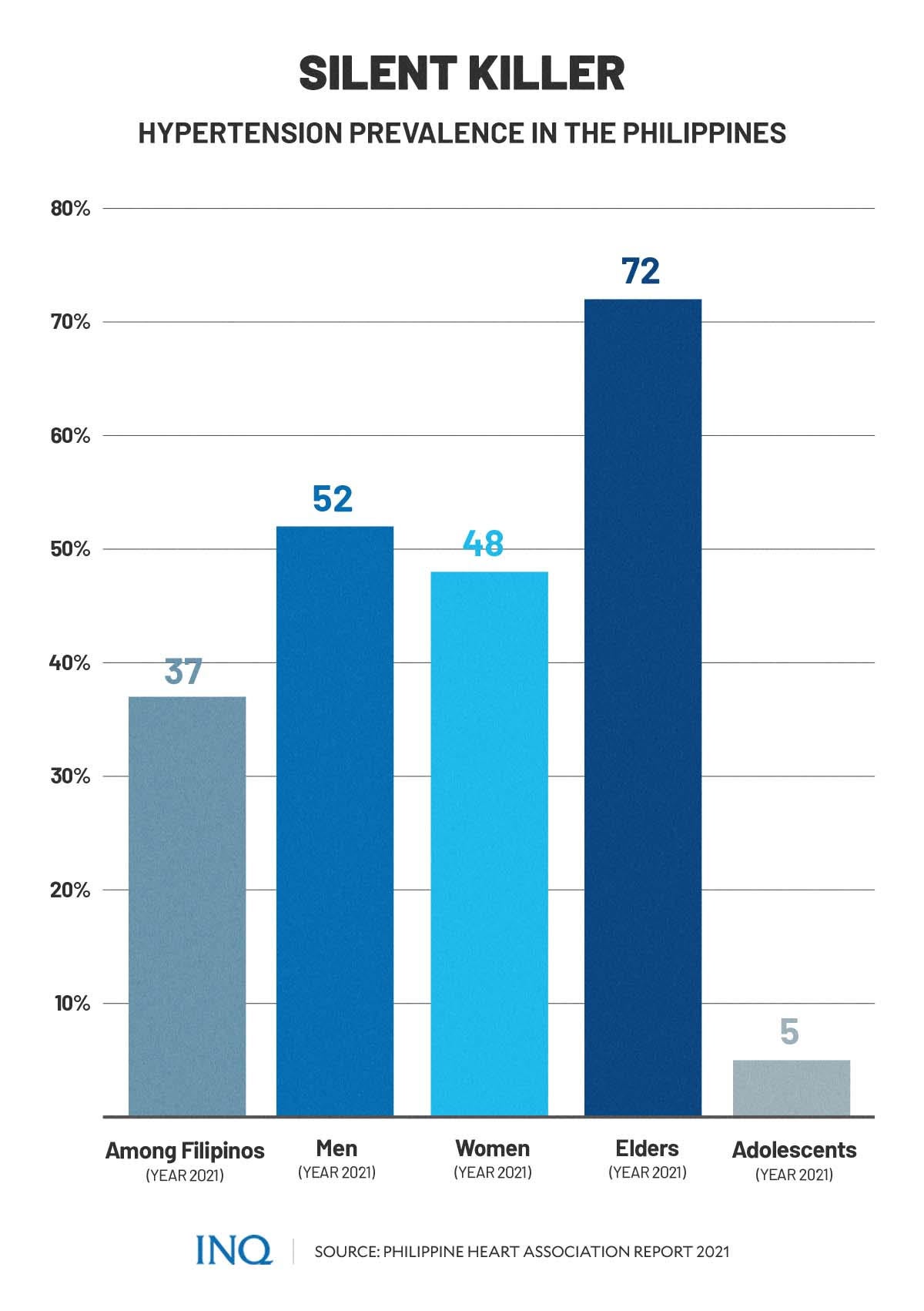 However, data from WHO found that only less than half of adults—42 percent—worldwide with hypertension are diagnosed and treated.

The PAHO advised everyone, especially those who have not gotten their blood pressure measured, to visit a primary health care facility to obtain an accurate blood pressure reading.

Prevalence of hypertension in PH

According to estimates by WHO, at least 1.28 billion adults aged 30-79 years across the world have hypertension. Most, or two thirds, live in low-and middle-income countries.

In 2021, according to the fourth Philippine Heart Association (PHA) Report on the Study of Hypertension (Presyon), the prevalence of hypertension among Filipinos increased to 37 percent. 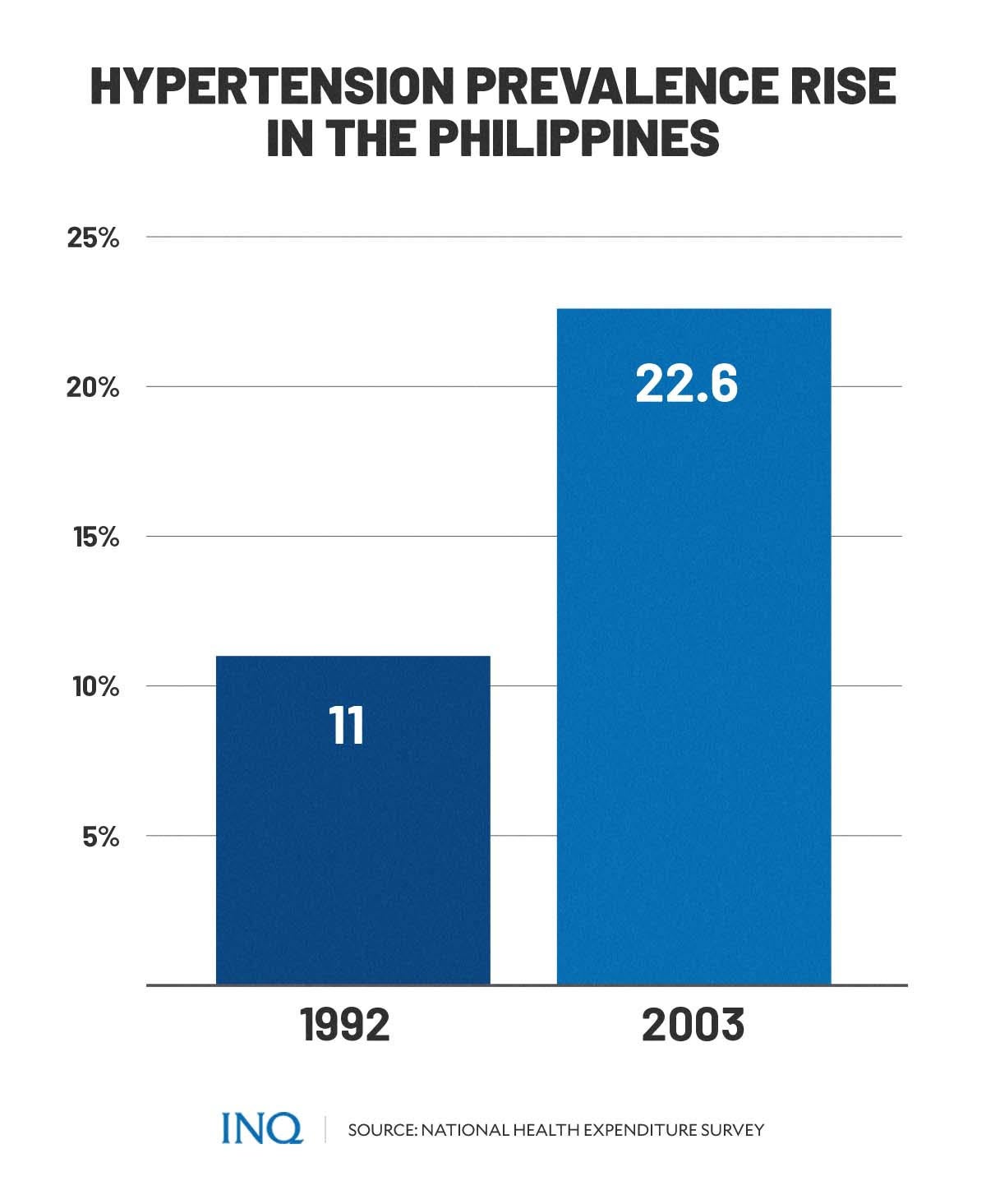 “It looks like it is really unstoppable. I do believe with or without COVID, the progression of prevalence really is consistently increasing,” said PHA president Dr. Jorge Sison at an online forum last year.

The study, conducted from January to April 2021, involved 2,796 participants across 13 countries.

According to data from the National Health Expenditure Survey, hypertension prevalence among Filipinos was 11 percent in 1992 and 22.6 percent in 2003.

Hypertension is also considered a major cause of premature death worldwide, according to WHO. 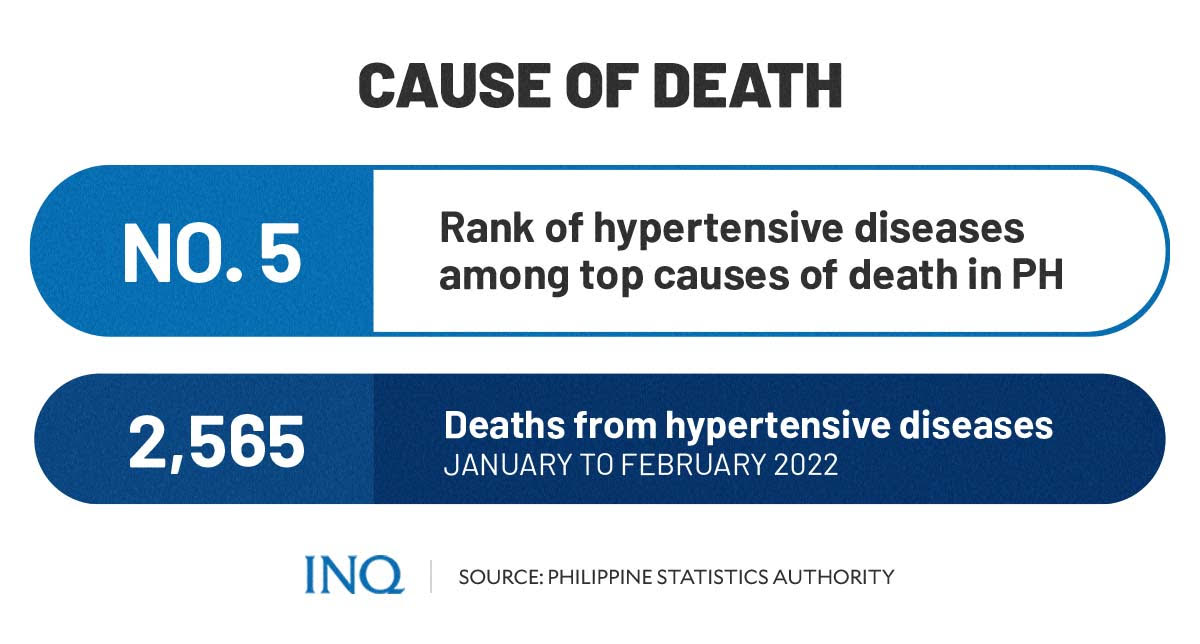 Data as of March 2022 from the Philippine Statistical Authority (PSA) showed that hypertensive disease was fifth among top causes of death in the Philippines, with 2,565 deaths or 5.9 percent of total deaths that occurred from January to February 2022.

According to WHO and US CDC, individuals are more likely to have high blood pressure if they: 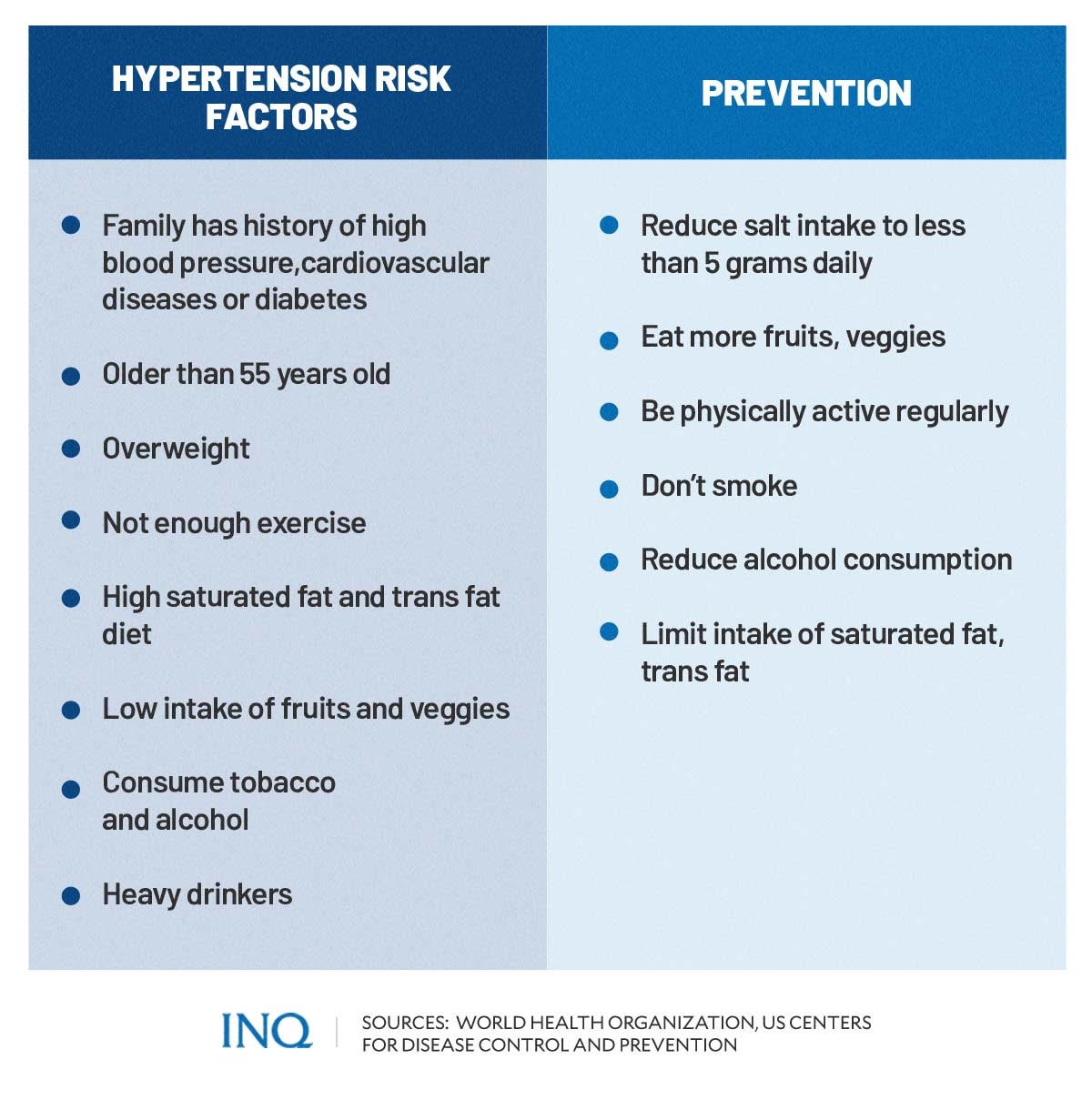 One thing about hypertension, however, is that the only way to detect it is through measuring blood pressure.

“Hypertension is called a ‘silent killer’. Most people with hypertension are unaware of the problem because it may have no warning signs or symptoms. For this reason, it is essential that blood pressure is measured regularly,” said WHO.

Around 46 percent of adults with hypertension across the globe are unaware that they have hypertension, according to WHO.

“When symptoms do occur, they can include early morning headaches, nosebleeds, irregular heart rhythms, vision changes, and buzzing in the ears. Severe hypertension can cause fatigue, nausea, vomiting, confusion, anxiety, chest pain, and muscle tremors,” said WHO.

If left untreated or uncontrolled, hypertensions can cause several complications, including serious damage to heart.

“Excessive pressure can harden arteries, decreasing the flow of blood and oxygen to the heart,” said WHO.

Elevated pressure and reduced blood flow can cause:

Based on a 2005 study by the PHA, the incidence of cardiovascular diseases (CVD) in the Philippines, citing a Philippine Heart Association survey among hospital-based population, showed hypertension as the highest—38.6 percent.

The higher the person’s blood pressure is and the longer it goes uncontrolled, according to Mayo Clinic, the greater the damage.

Unmanaged high blood pressure can also lead to complications such as:

“Diagnosing and treating hypertension timely can reduce the risk of heart attacks, stroke, and kidney failure, among other health problems,” said PAHO.

“When blood pressure is high, the heart has to pump harder, increasing the risk of damage to the heart and blood vessels in major organs such as the brain and kidneys,” it added.

Across the world, approximately 1 in 5 adults—21 percent—with hypertension have it under control.

The latest Presyon study, meanwhile, found that 67 percent of adult hypertensives take medication for their high blood pressure. Around 64 percent had uncontrolled hypertension and 36 percent had controlled their condition.

There are several ways to control and manage hypertension, which can also reduce the risk of complications—such as heart attack, stroke, and kidney damage, as well as other health problems—among people who have high blood pressure. 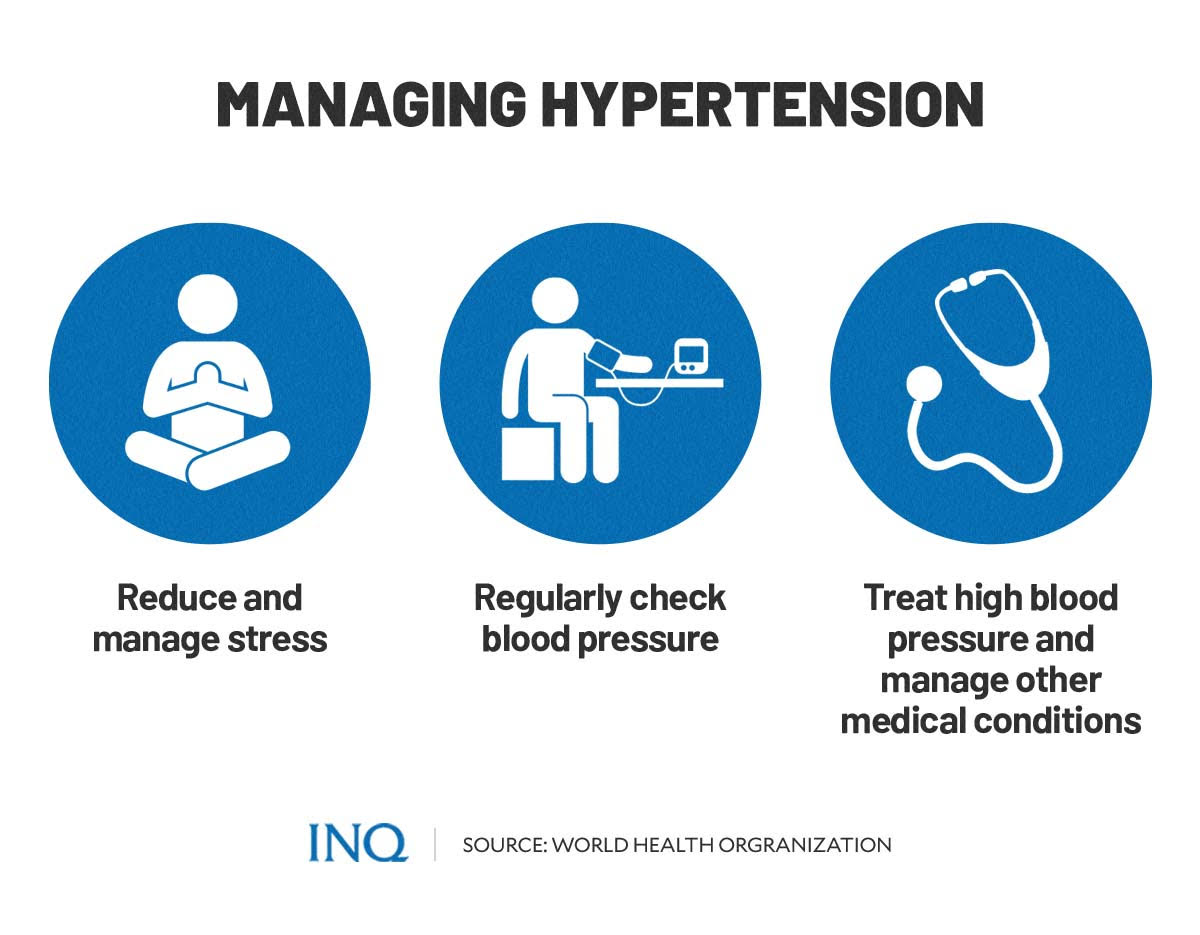 Some of the preventive measures, according to WHO, include:

Hypertension can also be managed through: