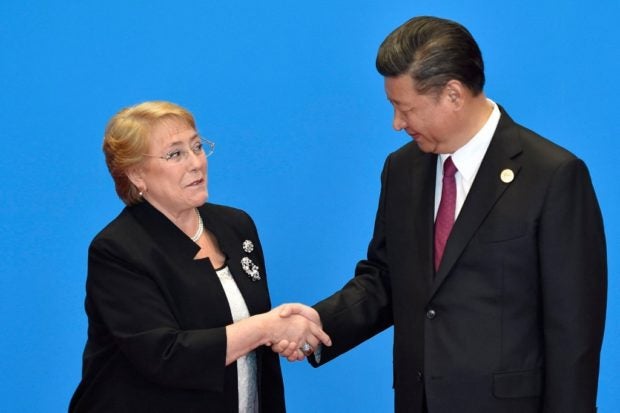 FILE PHOTO Then Chile’s President Michelle Bachelet (L) shakes hands with her Chinese counterpart Xi Jinping during the welcome ceremony for the Belt and Road Forum, at the International Conference Center in Yanqi Lake, north of Beijing, on May 15, 2017. (Photo by Kenzaburo FUKUHARA / POOL / AFP)

Bachelet’s landmark six-day visit includes stops in the remote western region of Xinjiang, where Beijing has been accused of incarcerating over one million Uyghurs and other Turkic Muslim minorities, which has been called a “genocide” by the United States and lawmakers in other Western countries.

China vehemently denies the allegations, calling them the “lie of the century.”

“Human rights issues should also not be politicized, instrumentalized, or treated with double standards,” Xi said according to a CCTV readout, adding that China has “a human rights development path that… suits its national conditions”.

Xinjiang was not mentioned specifically in the readout of the call, but it reported Xi as telling Bachelet that there is no “ideal nation” on human rights.

He added that there is “no need for a ‘teacher’ who is bossy towards other countries,” in an apparent reference to recent public criticisms of the trip by United States and UK officials.

According to the Chinese readout, Bachelet said the UN Human Rights Office is “willing to strengthen cooperation with the Chinese side … and make joint efforts to promote the progress of the global human rights cause,” according to CCTV.

She was also reported to have said: “I admire China’s efforts and achievements in eradicating poverty, protecting human rights, and realising economic and social development.”

State Department spokesman Ned Price said Tuesday the United States was “appalled” by the latest allegations, after several media outlets reported on thousands of leaked documents and photographs from inside Xinjiang’s system of mass incarceration.