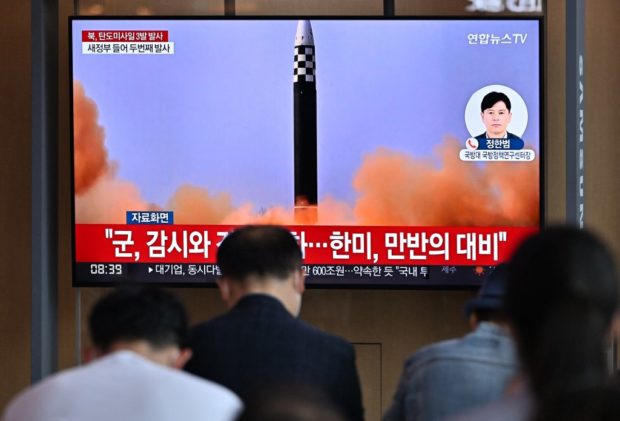 People watch a television screen showing a news broadcast with file footage of a North Korean missile test, at a railway station in Seoul on May 25, 2022, after North Korea fired three ballistic missiles towards the Sea of Japan according to South Korea’s military. (Photo by JUNG YEON-JE / AFP)

WASHINGTON — The United States condemned North Korea for what it said were three ballistic missile launches and called on Pyongyang instead to choose dialogue.

“We call on the DPRK to refrain from further provocations and engage in sustained and substantive dialogue,” he said.

The relatively muted reaction comes after days of public warnings by the United States that North Korea could test a missile or nuclear bomb amid a just-concluded visit by President Joe Biden to South Korea and Japan.

The State Department spokesperson said the launches “are a violation of multiple United Nations Security Council resolutions and are a threat to the region.”

The US national security advisor, Jake Sullivan, also condemned the launches in a phone call to his South Korean counterpart, Kim Sung-han, moments after returning to Washington with Biden.

“They both condemned the DPRK’s destabilizing ballistic missile tests and committed to continue building on their close coordination,” a White House statement said.

In line with an assessment by Seoul, the White House said there were three missile launches. South Korea suspected that one was an intercontinental ballistic missile.

The Biden administration has repeatedly called for dialogue with North Korea, likely at the level of rank-and-file diplomats, but has seen no enthusiasm in return.

Even while staying low-key in its public condemnation of North Korea, the United States has moved to toughen sanctions through the UN Security Council, although diplomats say that China and Russia are set to block any action.