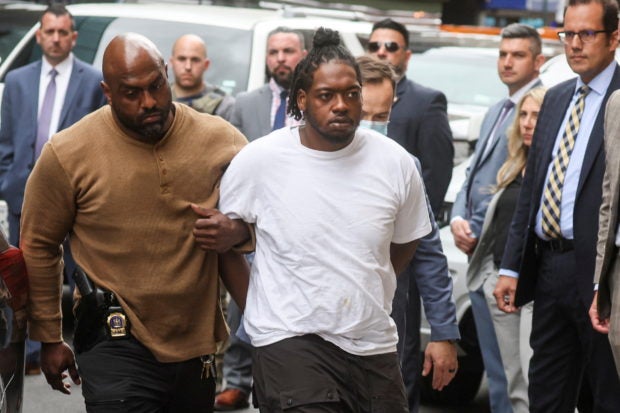 New York Subway shooting suspect Andrew Abdullah is escorted by New York City Police (NYPD) Detectives as he arrives to turn himself in at a Police Precinct in New York City, U.S., May 24, 2022. REUTERS/Brendan McDermid

A man suspected in the fatal weekend shooting of a New York City subway rider, less than two months after a mass shooting on the transit system, was arrested on Tuesday and charged with second-degree murder and second-degree criminal possession of a weapon, authorities said.

Andrew Abdullah, 25, was arrested at his lawyer’s offices for the slaying of Brooklyn resident Daniel Enriquez, 48, who was fatally shot in his chest while he rode in a subway car on Sunday morning, Police Commissioner Keechant Sewell said at a news conference.

Abdullah was described as a gang member and repeat offender with a criminal history dating back to 2016, including arrests for felony assault, robbery, attempted murder and a gun charge that remains open.

He was given a 30-month sentence in May 2017 for the attempted murder charge, and was out of prison in June 2019 and released from parole in June 2021, NYPD Chief of Detectives James Essig said.

New York Mayor Eric Adams called Abdullah the “poster child” for perpetrators of violence in the city and suggested that the state’s criminal justice system played a role in the killing.

“We got a killer off our streets, but far too many killers are back on our streets through the revolving door of the criminal justice system,” Adams said.

Abdullah was photographed by Reuters walking into the NYPD’s 5th Precinct station in handcuffs with a police detective escort.

Law enforcement was able to locate the suspect with the help of police canvassing, community engagement and social media outreach, Sewell said.

A 9-millimeter shell casing discharged from a Ruger firearm was recovered at the scene, Essig said. The gun, which was stolen in Hampton, Virginia in 2019, was later handed at random to a homeless male, who authorities brought in for questioning, he said.

Enriquez, who worked for investment bank Goldman Sachs, was riding a train crossing a bridge from Brooklyn into lower Manhattan when he was shot without provocation, authorities said. He was pronounced dead at Bellevue Hospital.

Adams said his heart is with the family of Enriquez, an innocent person who should be alive today.

Sunday’s attack adds further pressure on Adams, a former police captain and Brooklyn borough president who made crime and public safety a focus of his campaign for mayor last year.

In February, Adams and New York Governor Kathy Hochul promised to increase police patrols and mental health outreach in response to a spate of attacks in the subway system, which is run by the state-controlled Metropolitan Transportation Authority.

On April 12, the subway system saw one of the most violent attacks in its history, when a man set off a smoke bomb and opened fire in a subway car, leaving 23 people injured in the chaos, including 10 hit by gunfire.

Frank James, 62, was arrested a day later. He was indicted earlier this month on terrorism and other federal charges.