newsinfo / Headlines
Headlines
NO FIXED DATE FOR ITS TERMINATION

Marcos looking at extending VFA with US 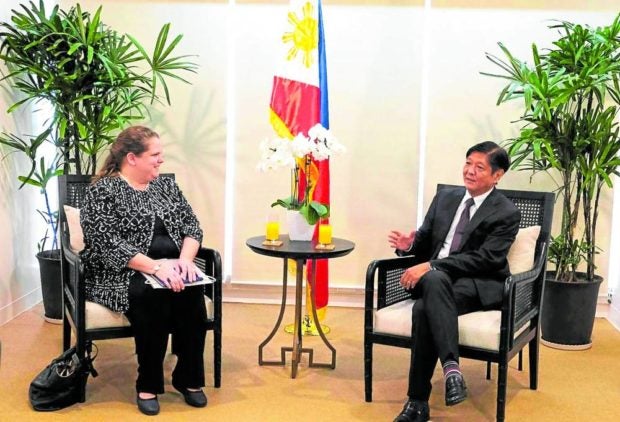 MANILA, Philippines — Presumptive President Ferdinand Marcos Jr. said he has met with Washington’s top diplomat in the country and discussed the “re-signing or the extension” of the Visiting Forces Agreement (VFA) between the Philippines and the United States.

Marcos on Monday said security issues were raised during his meeting with US Chargé d’Affaires Heather Variava at his election campaign headquarters in Mandaluyong City.

Variava was one of the four senior diplomats who met with Marcos two weeks after the Philippine presidential elections, which he won with more than twice the votes received by his main rival, Vice President Leni Robredo.

The ambassadors of Japan, South Korea, and India also paid a courtesy call on the son and namesake of the late ousted dictator.

“Security concerns of course have always been a big part of our relationship with the United States,” Marcos told reporters in his first news conference after the May 9 elections.

Washington fully backed his father after he declared martial law in September 1972, shut down Congress and ruled by decree, clamped down on the press, and tried to eliminate all opposition until the dictator was toppled by a popular revolt in February 1986.

“Of course, we discussed about security issues, the return or the re-signing or the extension of the VFA and how it has to be redefined for the near future with the situation around the world, especially in our region,” Marcos said.

The VFA, which provides a legal framework for the presence of US troops during joint military exercises in the country, was a bone of contention for outgoing President Rodrigo Duterte, who repeatedly threatened to scrap it.

There is no fixed date for the termination of the VFA. As currently worded, the military agreement shall remain in force until the expiration of 180 days from the date on which either the Philippines or the United States gives the other party notice in writing that it desires to terminate the agreement.

In February last year, Duterte demanded payment from Washington if it wanted to maintain the VFA.

But in July last year, he scrapped the plan following a visit to Manila by US Defense Secretary Lloyd Austin.

The White House earlier said it would seek closer security ties with the Philippines under Marcos.

The meeting between Marcos and Variava came days after the former senator had a “lengthy” phone conversation with Chinese President Xi Jinping.

Marcos said he assured Xi of “more fruitful and meaningful” relations despite the maritime dispute in the South China Sea between Manila and Beijing.

Marcos told reporters that he would also welcome possible joint ventures between the United States and the Philippines, but did not elaborate.

“One of the first subjects we came upon was the assistance that the United States is offering to mitigate climate change in the different countries and they are very active. They want to take a leadership role in the mitigation of the effects of climate change, of global warming,” he said.

He said his meeting with South Korea’s ambassador covered information technology, regional security, and the possible reactivation of the unused Bataan Nuclear Power Plant, which was built during his father’s time.

The plant was intended by his late father to be part of his economic modernization legacy but was mothballed following his overthrow two years after completion.