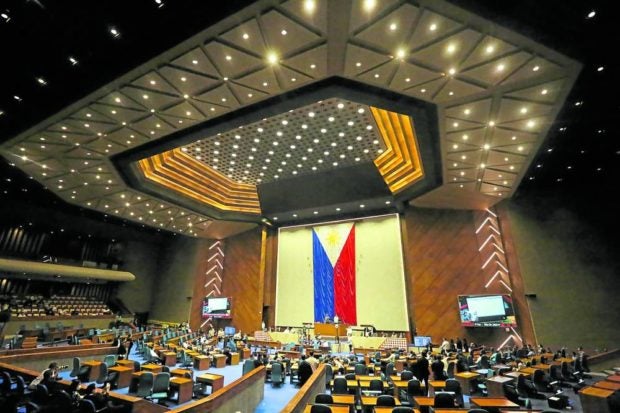 EXPEDIENT | The national canvassing of votes for president and vice president begins in earnest on Tuesday at Batasang Pambansa in Quezon City, with Congress leaders promising an accurate, transparent, and expedient process. (Photo by NIÑO JESUS ORBETA / Philippine Daily Inquirer)

MANILA, Philippines — The heads of the congressional panels that will officially canvass the votes for president and vice president on Tuesday said they saw the nation healing after it was rent apart by one of the most divisive and deeply emotional elections in the country’s history.

Sen. Miguel Zubiri and Leyte Rep. Martin Romualdez on Tuesday welcomed the manifestation by the lawyers for Vice President Leni Robredo and her running mate Sen. Francis Pangilinan that they were waiving objections to the national canvass of the votes in the May 9 elections.

Romualdez, the House panel chair of the National Board of Canvassers (NBOC), thanked the Vice President for her “graciousness” and praised the sportsmanlike conduct of her lawyer, Romulo Macalintal.

“Indeed, the theme of the Uniteam begins to prevail in the country. The healing has begun. Let us unite as a nation for and by the Filipino people,” said Romualdez, the current House majority leader and the likely new Speaker. Uniteam was the campaign monicker used by presumptive President Ferdinand Marcos Jr. and presumptive Vice President Sara Duterte.

Romualdez acknowledged the “magnanimity of president-elect Bongbong Marcos,” his cousin, who was represented by lawyer Victor Rodriguez.

“At least now we can let the healing begin. And we can set aside politics,” Zubiri said.

The reelected senator was dropped by Robredo and Pangilinan as one of their guest candidates after he openly supported Marcos and Duterte, whose votes in the unofficial count showed that they won by a landslide.

In his manifestation on behalf of Robredo, Macalintal said he was waiving his appearance and all objections to the official canvassing and its results.

“In her public statements Vice President Leni Robredo asked her supporters that we need to accept the decision of the majority,” he said.

Speaking in Filipino, he quoted the Vice President saying, “Although the votes have not all been counted, although there are questions on the elections that still need to be answered, the voice of the people is getting clearer and clearer.”

“For the sake of the Philippines that I know we all love dearly, we need to listen to that voice because ultimately we all share one nation,” he said, still using Robredo’s words. “As the picture becomes clearer we need to start accepting the fact that the result of the elections is not in our dream’s favor.”

Macalintal told the board that consistent with the Vice President’s pronouncements “and so as not to delay the proceedings … we would like to make of record our continuing manifestation that we interpose no objection to the inclusion of canvass of all the certificates of canvass for president from the various provincial and city boards of canvassers.”

He concluded with the last lines from “The Prayer of a Sportsman” by American poet Berton Braley: “Dear Lord, if I should win let it be by the code, with my faith and my honor held high. And if I should lose, let me stand by the road and cheer as the winners go by.”

Macalintal said his manifestation was just “an acceptance of the election results,” not a concession by Robredo.

“I don’t want to use ‘concession’ if the Vice President did not use it,” Macalintal told the Inquirer in a phone interview.

In his own manifestation, Rodriguez, who served as Marcos’ campaign spokesperson and would soon serve as his executive secretary in the new administration, said they recognized and thanked “the patriotism exhibited by Vice President Leni Robredo for expressly recognizing the integrity and the result of the recently concluded general elections.”

It was the first time since the election campaign began that he has addressed Robredo as “vice president.”

“We were all surprised but it was a good surprise,” Rodriguez later said at a press briefing.

He also thanked the lawyer for another defeated presidential aspirant, Manila Mayor Francisco “Isko Moreno” Domagoso, for a similar manifestation.

As of 10:43 p.m. on Tuesday, the NBOC has canvassed 100 out of 173 certificates of canvass (COCs), for presidential candidates.

In a speech before the canvass got underway inside the cavernous session hall of the House of Representatives on Tuesday afternoon, Romualdez assured Filipinos that “we will uphold the integrity of the electoral process.”

Speaker Lord Allan Velasco assured the nation that Congress will “ensure that the will of the people in choosing the two highest officials of our country is respected.”

Sotto urged his fellow lawmakers to be “mindful of our moral duty to resist any ill-motivated attempt on the part of some parties or elements” who may have “deliberately intended to cause the failure of the automation process or the election itself, to derail the proclamation of a new president and a new vice president.”

He said that going by the experience in the 2016 national elections, and barring any unforeseen events and hitches, the new president and vice president would be proclaimed at the earliest on Wednesday afternoon or on Thursday morning.

—WITH A REPORT FROM DJ YAP

Congress finishes canvassing 105 out of 173 COCs