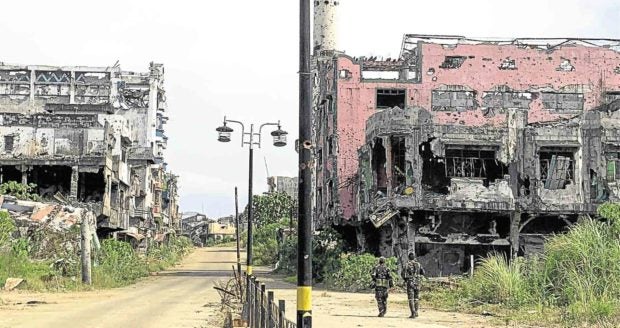 AWAITING REHAB The center of the five-month fighting between Islamic State-linked armed groups and government soldiers in Marawi City in 2017 is awaiting rehabilitation. —JEOFFREY MAITEM

ILIGAN CITY, Lanao del Norte, Philippines — Five years after the war that left Marawi City in ruins, leaders of civil society and families displaced in the siege by Islamic State (IS) terrorists were still demanding answers from the national government as to what exactly happened in the run-up to and during the five months of fighting that destroyed its main commercial center.

With the administration of President Rodrigo Duterte winding down without giving Maranaos the answers they sought, it would be up to presumptive President Ferdinand Marcos Jr. “to revisit “ the events that led to the Marawi siege and to “set the tone for starting things right,” said Saripada Pacasum Jr. of Marawi Reconstruction Conflict Watch.

Pacasum noted that in the past five years, people who have “untold stories” about the siege have been keeping information to themselves for fear of backlash, even as they have pictures and videos to back up their tales, which mainly showed that the terrorists’ takeover of the city could have been aborted, and of the massive looting that followed.

“All are afraid to talk,” Pacasum, who was Lanao del Sur’s disaster risk reduction and management officer during the siege, told the program Alerto Bangsamoro over DxMS radio in Cotabato City on Monday.

“We should have an avenue for this [airing out]. We don’t want for [people’s] pent-up anger to linger and … another siege to happen,” Pacasum explained.

The siege by local IS affiliates, led by their Southeast Asian emir, Isnilon Hapilon, forced more than 350,000 people to flee the city, many walking 40 kilometers to Iligan City. As of March this year, the UN High Commissioner for Refugees counted 17,067 families, or 85,335 individuals, from Marawi who remained displaced.

Two years ago, Lininding had urged the Senate to undertake such a probe, especially after Sen. Panfilo Lacson said the siege could have been prevented had the country already had the Anti-Terrorism Law in place.

Lininding had blamed state security forces for failing to flex their muscles in time to prevent the siege as they already knew such intention by the brothers Abdullah and Omar Khayyam Maute. Three months before the war in Marawi, the Maute band had laid siege on Butig town, over 50 km away.

During the war, when government forces worked to flush out the terrorists from the city, displaced families took issue with the alleged looting of their houses.

What was highlighted in news reports were those done by IS militants. But Pacasum said that even in houses in so-called “safe zones,” which were supposedly under the control of the military and police, looting happened.

Books written about the siege, such as “The Battle of Marawi” by Criselda Yabes and “Marawi Siege: Stories from the Frontlines” by Carmela Fonbuena, mentioned incidents of looting.

“We cannot remain quiet with these issues,” Pacasum said on Monday, on the fifth anniversary of the start of the siege.

An assessment in 2017 placed the damages at P11.5 billion and losses at P7 billion in the 24 villages comprising the most affected area. But the process glossed over the looting of personal properties as it mainly focused on damaged public and private structures.

The newly enacted law providing compensation for damaged structures, lost belongings, and deaths due to the siege will be an opportunity to restore the affected families’ properties.

This is why Pacasum is urging President Rodrigo Duterte to lay the groundwork for its “swift and just implementation.”

Lininding said within his remaining days, Duterte should ensure that the law’s implementing rules were completed.

“There is [as yet] no reliable and credible government data as to how much is the damage [and losses],” Lininding lamented.