Zubiri mum on term-sharing for Senate president: I don’t want to jinx anything 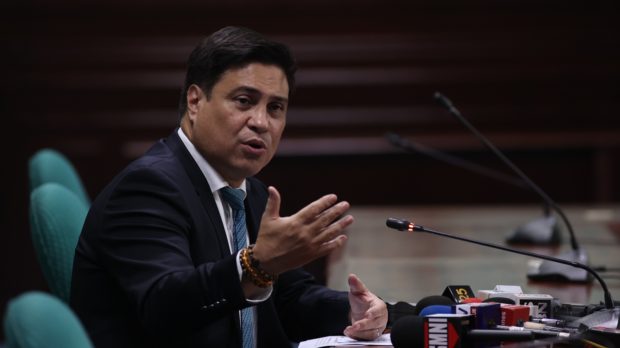 Senate Majority Leader Juan Miguel Zubiri answers questions from reporters at the Senate building in Pasay City as the upper chamber resumes session after a three-month break on Monday, May 23, 2022. Joseph Vidal/Senate PRIB

MANILA, Philippines — Senate Majority Leader Juan Miguel Zubiri has opted not to comment on the possibility of a term-sharing deal for the Senate presidency. But he disclosed that discussions are ongoing on who will lead the “supermajority” in the upper chamber for the incoming 19th Congress.

“No comment muna [I won’t comment yet], let’s not comment about term-sharing. I don’t want to jinx anything,” Zubiri said in an interview with reporters on Monday when asked if a term-sharing agreement is on the table in a bid to settle the competition for Senate president.

(Chiz and I won’t fight. We belong in the same group. Eventually, our group will decide who will lead our bloc. I’ll leave it at that.)

“Basta ‘yung grupo ni Ma’am Cynthia at saka ‘yung grupo namin [The group of Ma’am Cynthia and our group] will eventually be part of the supermajority, so we don’t want to ruffle any feathers. We will discuss it like discerning adults and hopefully we’ll come up with a conclusion on who will lead the supermajority for the next Congress,” he also said.

According to Zubiri, communication lines between him and Villar as well as other senators remain open.

On Monday, the Senate resumed session following a three-month break.

(I think there had been animosity during the break because we did not see each other, well today, all of us saw each other and we had a good laugh in the lounge…and at the end of the day, we are not fighting each other, we are colleagues.)

“Today was a good first step to discuss the issue of leadership and we have time, we have sufficient time,” he added.

He, however, stressed the need to finish Congress’ canvassing of votes cast during the May 9 elections for president and vice president which is expected to be completed this week.

“All the discussions on leadership maybe we can postpone until next week, we’ll be here one more week and we can sort things out, eventually we will be together in the supermajority,” he added.

‘We won’t shortcut the process:’ Prexy, VP proclamation eyed on May 25, says Zubiri