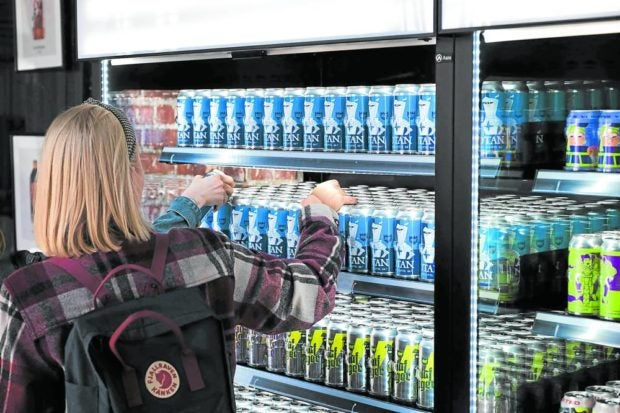 TASTE OF SECURITY | The new OTAN beer on display at Olaf brewery shop in Savonlinna, Finland, where the company decided to create a celebrative beer for the country’s bid to join Nato. (Agence Frace-Presse)

SAVONLINNA, Finland — When Finland decided to seek North Atlantic Treaty Organization (NATO) membership on Sunday, the owner of a small brewery in Savonlinna, Petteri Vanttinen, 42, decided to celebrate by launching a new beer in honor of the military alliance.

Savonlinna, which lies only 50 kilometers (31 miles) from the Russian border, has always been a battleground between East and West.

Vanttinen holds his beer and points out the surrounding areas which were bombed during World War II when Finland fought two bloody wars with its powerful eastern neighbor.

The lager has a blue and white picture of a knight with a NATO star on his chest, and tastes of “security, with a hint of freedom,” Vanttinen says. A steady stream of customers enter his shop, located in a red brick building built when Finland was still part of the Russian Empire in 1909.

“We came to buy the famous NATO beer. We wanted to see how it tastes,” Susanna Hakkinen, 24, and Emilia Mykkala, 28, both tell Agence France-Presse (AFP).

When Vanttinen went to bed on Sunday evening, he still wondered whether the beer was a stupid idea.

But the next day, while the Finnish parliament debated the bid to join the alliance, the “OTAN beer,” the French acronym for NATO, went viral on social media, with even some MPs sharing his Tweet.

The acronym is also a play on words in Finnish, meaning “I’ll have a beer.”

“It’s just exploded. I have been getting calls from all over the world, the US, Japan, Germany, too many to remember,” Vanttinen says.

His phone has been ringing around the clock for four days, with no end in sight.

“Normally we sell around a hundred cans of beer a day. Now the number is over 2,000,” Vanttinen says.

His small brewery, Olaf Brewing, which employs eight people, is now struggling to meet the demand, and the beer gets sold as soon as it leaves the conveyor belt.

“We’re a small brewery, we do our best, but right now can’t meet the demand, it’s too much,” Vanttinen says.

Less than three months after Russia invaded Ukraine, Finland submitted its application to join Nato on Wednesday, a stunning reversal of the Nordic country’s policy of military nonalignment, dating back more than 75 years.