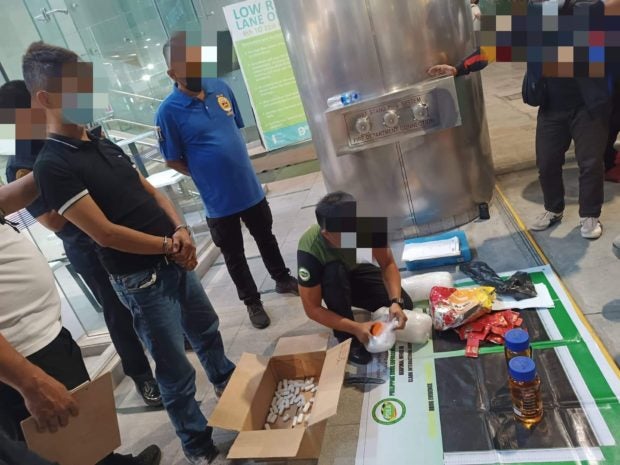 Government operatives inspect the cannabis oil discovered at the Port of Clark in Pampanga province after conducting an entrapment operation on May 19 against the package consignee. (Photo courtesy of PDEA-3)

CLARK FREEPORT, Pampanga––Authorities discovered marijuana hash oil, or cannabis oil, worth about P206,000 inside a package that arrived at the Port of Clark in this freeport, which also led to the arrest Thursday of the consignee in Taguig City.

In a statement, the Philippine Drug Enforcement Agency-Region 3 (PDEA-3) identified the arrested person as Ernest John Almazan, 36, of Makati City.

PDEA-3, with the PDEA Clark Inter-Agency Drug Interdiction Task Group, Bureau of Customs-Port of Clark, PDEA-National Capital Region, and the local police, conducted the entrapment operation to arrest the consignee of the package that arrived May 9 here from the United States.

“The illegal substances were contained in three glass bottles and were declared as drinking tea. The parcel underwent the process of X-ray, K9 sniffing, and field examination using Rigaku Progeny that led to its discovery,” the PDEA-3 said.

It said hash is the most potent and concentrated form of cannabis as it contains much higher levels of tetrahydrocannabinol than marijuana leaves.

PDEA-3 said the arrested suspect faces charges for alleged importation of dangerous drugs in violation of the Comprehensive Dangerous Drugs Act of 2002. INQ