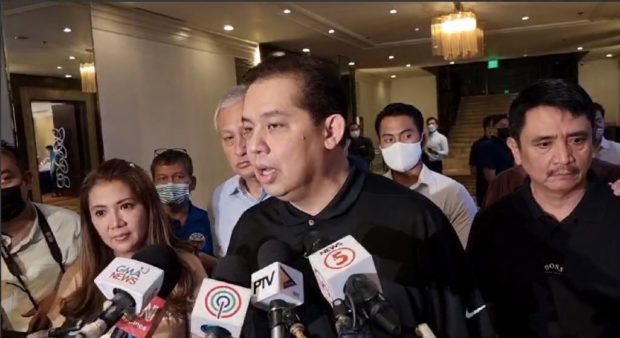 Leyte Rep. Martin Romualdez talks to the members of the media on Thursday, May 19, 2022, with him are Bulacan Rep. Rida Robes, Surigao Del Sur Rep. Johnny Pimentel and Pampanga Rep. Aurelio Gonzales. Photo from Lakas-CMD

MANILA, Philippines — The 19th Congress is eyeing to pass a stimulus bill titled “Bayan Bangon Muli (BBM)” as well as reschedule the barangay elections set this December in order to save P8 billion which could be used to fight the pandemic.

Leyte Rep. Martin Romualdez, who is being pushed to become the next Speaker of the House of Representatives, disclosed this during a lunch meeting with members of the Partido Demokratiko Pilipino–Lakas ng Bayan (PDP-Laban) on Thursday.

“It was [presumptive] President Marcos’ initials, BBM or Bayan Bangon Muli bill stimulus package that will allow the incoming President to harness the resources available during the closing period of 2022 and [pass] measures that are needed for the pandemic, hopefully, endemic stage of this COVID,” said Romualdez, a cousin of Ferdinand Marcos Jr., who is leading the presidential race based on partial and unofficial count.

“And of course to harness whatever remaining resources to stimulate the economy,” he added during the ambush interview.

Romualdez further said the House of Representatives would prioritize the postponement of the barangay elections this year so the government could save P8.141 billion and use it for pandemic response.

(One of the grievances, was the resetting of barangay polls, by the barangay chairpersons that we met in the League of Barangays, so we shall consider that.)

Romualdez likewise said the next Congress would also prioritize the passage of Marcos’ legislative agenda.

But he then acknowledged that the 19th Congress still has a pending task to fulfill – which is to canvas and proclaim the winning president and vice president in the May 9 elections.